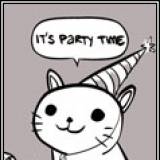 What should have been an epic goodbye to an iconic Los Angeles location turned into a grand disappointment. The House of Blues on Sunset Blvd. is closing, and the band that made their name in a weekly residence at the venue every Monday, Steel Panther, was chosen to end things with a bang. Not only would the band be playing, but tons of famous friends would be in attendance, as well as brought on stage to make the night extra memorable. People such as Rob Riggle, Billy Ray Cyrus, and the guitarist for another local LA based band Extreme Nuno Bettencourt just to name a few right off the bat.

The show kicked off in typical Steel Panther fashion, with heavy metal riffs, lots of sexual innuendo, and kick ass stage choreography. As the excitement started to grow, so did the size of the crowd. For anyone that’s never been to a House of Blues before, it’s a relatively small intimate venue. For this show in particular, the word “intimate” became more and more apropos. As more people piled into the building, everyone’s personal space shrank, to a very uncomfortable level. The phrase “nuts to butts” immediately comes to mind, and is 100% accurate. As a large, raucous (and increasingly inebriated) crowd is wont to do, there began a fight for dominance in the standing room only audience. People were shoving into others in an attempt to traverse the capacity crowd in order to find the perfect viewing spot. What was once a clear view of the on stage action quickly turned into a view of nothing but heads, cell phone, and tablet screens (people vying for a shot of the goings on). Spilled drinks covered the floor everywhere you turned, booze soaking into shoe soles, making each already difficult step or movement increasingly dangerous. At one point, a fight between two women began to break out directly behind me, causing one of my friends to risk his safety by interjecting. One positive is that security for the night was on point, and the potential brawl was quickly stopped.

All of this doesn’t even cover the action on the stage. Steel Panther are known for having one hell of a show, and the performance of the band itself was as entertaining as it always was. Women were brought on stage to dance along seductively with songs that, for someone not in on the joke, can be incredibly misogynistic. Some even bared their breasts at the request of the band itself, goaded on by the crowd as well. Aforementioned guests of the band were brought on throughout the night to join the band in not only covers of famous bands of the era that Steel Panther so wonderfully lampoons (while at the same time embraces), but for some of their own classics. Joey Fatone sang “Girl From Oklahoma”, Dane Cook helped perform a cover of Van Halen’s “Jump”. Even Ron Jeremy came up at one point, to drunkenly play his harmonica for some unknown reason.

Unfortunately, no manner of kickass heavy metal could save the show for me. The first half of their set went relatively well, but at some point the capacity crowd became too much. Constantly being pushed from behind, people pushing their way in front of me (despite being fortunate enough to befriend people nearby that had been at the show the entire time), and people with no concern for others, blatantly holding up cell phones and tablets to take pictures of celebrities on stage that most people probably couldn’t have cared less about moments before, are few of the many annoyances or disturbances that soured my good mood, with there being no return to form. This isn’t a slight on Steel Panther themselves, they had no way of knowing just how stuffed the building would be, or how their celebrity guests would end up working out. Billy Ray Cyrus and his daughter Miley are notable examples, the latter being “dragged” on stage to join in on a cover of Def Leppard’s “Pour Some Sugar On Me”. As previously mentioned, Ron Jeremy pulling out a harmonica and doing his best to (unintentionally) confuse the audience with his drunken playing was a particular mood killer. The band itself easily recovered with every celebrity flub (Joey Fatone was by far the highlight of celebrity participation), and I imagine those less sober than I wouldn’t have let anything ruin their night. Perhaps it’s a failing on my part, but it is what it is.

All in all, what should have been one amazing party turned into anything but for myself. I feel that the blame can be placed squarely on the venue itself for what was clearly an oversold event.

Satoru Iwata was part of a dying breed in the gaming industry, a breed that tried to focus on the fun of playing video games, instead of the financial return. Phil Spencer, head of Microsoft, was recently quoted as saying “I think our industry is better when more people who [make] decisions on games play.” The wording comes off a bit confusing, but the general idea is that the industry as a whole is made better when the people in charge of the industry are also gamers themselves. While there’s nothing wrong with trying to go for the quick buck, Satoru Iwata, and by extension Nintendo, was not about that. This is something that I wasn’t really made aware of until Mr. Iwata’s untimely passing, but when I look back at his legacy with Nintendo, I realize the folly of my thoughts.

The people behind the Game Developers Conference, or GDC, recently uploaded a keynote speech that Iwata-san made, way back in 2005. The Nintendo DS wasn’t even a year old during this speech, but it becomes evident just how much joy Satoru Iwata garnered from video games. At one point during his speech, he invites about 5 or 6 other people to come up to the stage and join him in a game of Mario Kart. While watching these people play the game, Iwata’s love of the genre begins to shine through. He and Bill Trinen (the Senior Product Manager at Nintendo of America) share quips back and forth throughout the session, and whenever the camera shows Iwata’s face, you can easily see how much he enjoys the act of playing games with others.

Further into the speech, Iwata and Trinen go on to showcase games like Nintendogs and Electroplankton, two titles for the original DS that broke the mold of what a traditional game is/should be. The design philosophy behind these types of games is to bring people that already don’t identify as gamers themselves. It is one of, if not the most important, core principles behind Nintendo’s design strategy since Mr. Iwata first became President of Nintendo of Japan. The Nintendo Wii had not come out at this point, but the motivation behind games such as Nintendogs were to get people playing again. The key word there is “playing”. Obviously companies are out to make money at the end of the day, but that was not Nintendo’s main goal. If they made money along the way, it was more of a happy accident than anything. Nintendo was (and still is) about games first and foremost. It’s something that seems to be less and less prevalent as time goes on.

The world has lost one of its great innovators, and one of its most brightest minds with the passing of Satoru Iwata. It is a hole in the industry (and at Nintendo specifically) that will be incredibly difficult, if not impossible to fill. It makes me sad that our last major interaction with Mr. Iwata, and Nintendo as a gaming community, was one of disappointment. Iwata-san would rather take a pay cut than lose people on his team, and that is something that is rare to find in this day and age. In truth, the upset lies with the fact that we believe that Nintendo can do better. We know what the company is capable of when firing on all cylinders, and our lofty expectations have not been met as of late. There’s nothing wrong with voicing our disappointment, but my reaction is still the same. I just hope that Mr. Iwata knew how much he was truly respected in this industry, with both gamers, and the people that make the games as well.

Life is often taken for granted, and in a lot of cases, taken away far too soon. We are lucky that we have people such as Iwata-san around to show us the joy in the simple things. It’s a shame that, more often than not, it is only discovered in retrospect, after it is too late.

Thank you so much for the memories, Mr. Iwata. May you rest in peace.