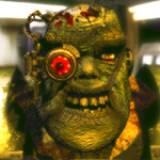 This seems like a pretty weak quick look. Vinny really should have focused on reading the text for each encounter. The game is really about the journey through each board and when you are basically fast forwarding to each combat encounter you are basically missing most of the interesting parts of the game. It's clear Dan had no idea what was happening through pretty much the entire thing.

Also this is not out for Xbox One yet. I'm waiting for that version but it was delayed during testing. I'm guessing is it failed cert and now they are waiting for it to be recertified. I know the first game froze up on me several times after completing a quest which caused me to stop playing so hopefully that won't be an issue this time.

I'm glad that they are trying to learn the encounters before getting hints from Brad. While it would still be fun just seeing them trying to execute the mechanics it was fun to see people learning the raid. It's easy to find groups to raid with, but it's hard to find a group that will take the time to learn the raid together so this is an experience most people won't be able to get themselves.

I'm all for the return of Dan Ryckert for whatever reason he comes up with, although Vinny should lay down the law and not allow him to take over the bodies of characters they already named. Next week Abby can reinstall Langzone into his rightful body and Dan into a rookie then the damage done this week would be minimal.

I don't think anyone is going to survive the next mission though.

That run and gun on Dan at the end was brutal to watch. The grenade was a guaranteed win, the enemies were bunched together and none were in overwatch. Didn't even need to move to cover.

Also that Dan run and gun to pick up the meld was a bad run and gun as well. Could have moved to the meld, picked it up and returned to his original cover position even without run and gun. Might not have aggro'd the sectoids and been able to focus on the thin men.

Anyways loving the series. It's as much of a bloodbath as I was expecting.

Wow, complete meltdown from Dan as soon as there is a bit of pressure. I think he forgot about the Alien behind the team 3 turns in a row, and he managed to move the civilian at the end in the most idiotic way possible.

At least he fixed the base a bit before his ineptitude showed.

Can't wait for the mission briefing in Abby's next go.

Think this is one of my favorite series since Kerbal. I do hope they come up with some reason to bring Abby back. I suspect this series is going to be a bloodbath and it would be nice to have an Abby character around for part of it.

Maybe if a character hits 10 missions they get immortalized and not remade if they die, but if they survive less then that then they get remade (Abby II, or III, etc...)

Edit: The base layout is going to drive me nuts, I can already tell.

Glad I don't pay much attention to social media. I've really enjoyed the first few hours of Mass Effect. Though I'll take the fourth best Mass Effect over 95% of games out there and right now I'd rank it in third slightly above ME3. I just wish the the trial version didn't stop the story progression even if you have time left.

Holy crap, I just played through this a night or two ago. I'm guessing Vinny bought it on the same GOG sale I did.

I figured the top 6 were locks for the top 10. Thought for sure Doom was gonna win, though happy to see Hitman get the nod. Can't wait to listen to the podcast and see how it all came together. Would have loved to see Salt and Sanctuary make the list but I can see Alex making a strong case for Thumper and Dan fighting tooth and nail for Stardew Valley. I hope Jason put up a good fight for Salt and Sanctuary.

I haven't gotten out of the mall yet but I'm level 25 versus his 16. Chapter 1 is tons of fun though. Worth the price of admission for me. So far I like it more then DR3 (which I still enjoyed) but not as much as the first 2. Some solid gameplay improvements which allows you to use melee, thrown and ranged weapons all quickly. This is definitely the most fun I've had killing zombies in the series. Guess I'll see how the rest holds up after I get out of the mall.