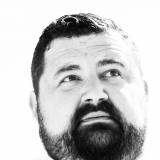 1. Somewhere in '08-'09. I mostly went on ComicVine and was a fan of the Whiskey Media Happy Hours that they would put out as one big happy family. Although I think those came slightly later. So ComicVine is how I found it.

2. Ryan, Jeff, Brad, Vinny, Intern Drew, Dave Snyder, and Alexis. ComicVine had Tony Guerrero and Sara Lima. Screened had Matthew Rorie and Alex Navarro. Tested had Norman Chan and Will Smith. At some point they had a crop of interns including Matt Kessler, Internet Steve, and Ben Pack and a couple other dudes.

4. Yeah I've seen the How To Build A Bomb series, which is pretty great. I haven't looked into any gamespot stuff.

This video is my most memorable happy hour. I love the dioramas, both tested segments, and Rorie rating movies in puppies out of 5.

This is my favorite thing from the interns.

Here's how to build a bomb

The first couple big live live show lives are wonderful time capsules of the time. I'll also recommend the first two Oktobercasts over at Tested. (24 hour podcasts for charity) They had a number of Duders on as guests. Those were somewhere in 2011 to 2013.

"all of them have active Premium accounts."

I'm really not that great at this sort of stuff, but my second monitor is an almost decade old hdtv. It only works at a lower resolution than 1920x1080. At higher resolutions it looks funky or has black bars or stuff cut off. I'd say try lowering the resolution once you restore the defaults. My TV likes 1360x768, the weirdest and most random of resolutions, but I'm sure every tv is different.

Yep. We truly got it in in the last 2 seconds, it says right on the page. Cutting it close. A little rough with the invisible abilities, but fully functional battle tetris gaiden gameplay, complete with three characters, Solid Scanlon, Dirty Dan Ryckert, and Hideo Kojima. In the options you can turn off magic for some regular ol' battle tetris-ing, or you can turn on rensa mode for the funsies. Here's an actually linked link. http://itch.io/jam/giant-rom-2/rate/46197

Going to start a 24 hour stream in a little over an hour. Showering and eating breakfast then we can start around 9 pm PST!

Gonna play Hearthstone, Puzzle Agent 2, and whatever else you guys want me to play. Also bought like 20 small 1 dollar games while they were on sale for a nickel or so. Those should be "fun" in the late shift.

Better late than never. The kids can always get more money so click the link below my stream to donate.

Tons of minor spoilers for the comics, both shows, and the telltale games, so be warned.

I haven't seen the fourth episode of fear yet, but I own the first 144 issues of the comic and I've seen all 5 seasons of the walking dead a couple times, and played the first season of the TellTale game. So, I have a pretty good idea of how the world of the Walking Dead works.

There are tons of kinds of zombies in different movies and books and tv shows. There are zombies that run and die from bodyshots ala Left 4 Dead. There are zombies that shamble and never really die, you cut off their hand and the hand will crawl towards you. That's more of a magical fantasy undead type of zombie. The Walking Dead have shamblers that die if you destroy their brain. If you cut off their arm, it's just an arm with no brain so it won't come at you, but shooting them in the body has little effect.

So the point is the people in Fear and TWD have the following two things going against them:

1) Everyone is already infected. Maybe not at the VERY beginning of the apocalypse, but definitely very early on. Rick was only in a coma for the first month or so. In the TellTale game, Lee went unconscious for like a day tops, probably way less, and all the rules still worked the same so I'm inclined to say everyone got infected in the months before the apocalypse, through it being airborne probably. No symptoms, it just lays dormant in you until you die. Then you reanimate into a zombie.

That's all the sickness does. It makes it so you reanimate and seek out flesh upon dying until your brain is destroyed. The show seems to explain walker bites a little differently, if I remember correctly, in that it doesn't explain them whatsoever. In the comics, the bites are explained as deadly merely because the walker's mouths are filled with bacteria and gross unhealthy stuff from all the eating of people and the fact that an undead corpse's mouth would fester with some nasty stuff. It's not that the zombie has the virus in it's teeth, and biting you infects you with something. No. It's because they bite you and you die from having a big mouth sized infected wound, with all sorts of other bacteria and viruses in it.

Coming into contact with a walker bite has been fatal with everyone unless they get it amputated. And at one point there are even people in the comics who rub there swords and knives and other melee weapons on the mouths of walkers, so that even if the wielder of the newly poisoned weapon dies, any nick or cut they get on their enemy will be fatal in a matter of hours or days.

So yeah, the point is that no matter what, if you die you become a walker.

2) Zombies don't exist in popular culture for them. They have no cultural existence of undead. This is entirely new to them. No one knows that 80% of zombie movies have you go for the head. No one knows that when Uncle Billy gets up from a night of heavy breathing, with what looks like spaghetti spattered all over his face, that actually means he took a big ol bite out of Little Suzie's abdomen in the next room over. They just don't understand that, this is entirely foreign to them. It's annoying when a zombie apocalypse happens in movies or TV nowadays, because everyone in the world knows what to do. In The Walking Dead, absolutely no one has any idea what a zombie is, and I like that.

This is also the reason they call them Walkers, or Biters, or the Dead, or the Infected, or Lamebrains, or whatever people decided to call them. There are so many names. In the comic, after a while of calling them all Walkers, they took to calling them Roamers and Lurkers. Roamers are the ones that wander around looking for something to eat. Lurkers are the ones that are pretty content staying exactly where they are, and waiting for people to get close before noticing them and ninjastealthkilling them.

TL;DR: Everyone is already infected. The infection only reanimates your corpse after you die, and zombie bites give you a regular wound with all sorts of other bacteria infecting it. Because the supergross infection kills you with a fever/sickness, you turn. Zombies don't exist in popular culture for them, so no one has a clue what to do about them, and that's why they all have different names for them. I think that the people of The Walking Dead not already knowing about zombies makes the show much more entertaining. If every character was a Daryl Dixon, the show would be super uninteresting because everyone would basically just be a superhero.

Plus, FTWD characters are basically season .5 TWD characters, so they're all going to be noobs for quite a while. We'll defintiely be at least to the end of Season 1, maybe as far as the middle of Season 2 before the characters in Fear have as much experience as season 1 TWD characters.(AKA very little, besides Glenn and maybe Shane, but his experience was mostly from being a cop, not being around walkers.)