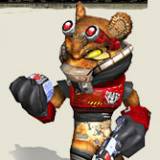 Funny How Things Work Out

My last blog update on GameSpot.com was as follows..

"So I think by now everyone knows about a certain other gaming website. Well it just launched, and I think Ill be spending a little more time there. So, if you too are going to that site, you can find me under the same name...fleasquire. See ya there guys! "

I became an active member of the GameSpot community way back in 2005 around E3. Back then Unions, Halo 2, and the "Next Gen Consoles," were the main topic of interest on the site. What kept me coming back after those three topics faded, was the fantastic crew and personalities that ran the site. Among them were Greg Kasavin, Rich Gallup, Bob Colayco, Carrie Gouskos, Brian Ekberg, Aaron Thomas, and the founding members of GiantBomb. After the drama that happened in back in 2007, I was among the loyal fan base that felt somewhat betrayed. I did not want plan on ditching the site completely, but as that crew that the fans had come to know so well all began to resign, I began to lose interest. As soon as GiantBomb launched, my participation on GS pretty much stopped. I still went to the site from time to time for news/reviews, but as GiantBomb grew, I needed GS less and less.

While my initial shock of this "merger" was probably the same as anyone else's, I wish nothing but the best for the crew of GiantBomb and GameSpot that I have been following so closely for almost 7 years.

Here's to many more guys, where ever you end up.

So, after months of anticipation, Giant Bomb has officially launched. I was one of the many who have been watching this thing from the beginning. So what is my first impression of the site now that it has launched. Well, its awesome.  I wont go as far as saying that it's flawless, but no site is. But with Giant Bomb, I see a lot more promise. The most impressive thing to me is the message that the guys are trying to send. They want a gaming website where a community of people can come together and talk about games. The reviews arent about a number, or about having one game having a higher score than the other. The reviews are simply there to say "We had X amount of fun with this game, and heres why you might enjoy it (or not enjoy it) as well." All of the editing is really a cool idea, and way to get users more involved with the site.  I'm just worried that eventually the site might get cluttered with too much crap that noone really cares about. I guess we'll just have to hope that the moderators keep the crap from getting out there. I am a little concerned with the speed of the site right now. I dont know if its me, but this website is running really slow. I have a feeling its just gonna take a little while for the guys to fix it. Also, the color of the site is a little too dark, I know I sound knitpicky, but it just feels a little weird.

To sum it up, I am really enjoying the new site, and I can't wait to spend more time on here.