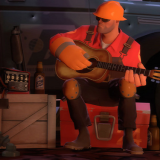 I've spent a shameful amount of my life playing EQ and WoW (yay raiding! right?), and I'm looking forward to playing something fresh. Star Wars: The Old Republic is the first MMO since WoW launched that I've had the slightest interest in playing (ignoring that brief stint where Giant Bomb made me think I needed Star Trek Online). This weekend I was invited to their weekend beta stress-test, so I spent a good chunk of my weekend playing a Sith Warrior up to level 18 (edit: 20!). I'd guess I probably sank somewhere close to 30 hours into it.

I could probably think of more bullets, but I'm getting tired. Overall I enjoyed it, if nothing other than as a simple, single-player, Star Wars RPG.

I posted this earlier on Reddit in a thread called "Is Anyone Else Really Enjoying Dragon Age II?"  The thread mostly comments on how much negative criticism the game has received from, what I believe is, a vocal minority.  For the sake of preserving my thoughts on the game, I'm putting what I wrote here:

If you go into this game looking for things to hate, they're there. These are my complaints:

That stuff said, I love the game. I played through the whole thing on Hard in 46 hours. It was a blast. I've made this list before in similar threads, but here's what I like:

So anyway, yes, someone else is really enjoying Dragon Age II too.

I finally wrapped up New Vegas tonight.  While I barely touched a good handful of the game's factions, my patience with this game reached its limit.  The fight for the Hoover Dam was in sight and I simply went for it rather than wrap up loose ends.

Now that I have the game on the shelf, I have to say that it's the most disappointing game I've played this year.  There are flat-out worse games for sure, but New Vegas nails the term "squandered potential" in a way no other game this year can approach.  I can't recall a game I've ever purchased with as many bugs as this.  Fallout 3 and Oblivion ran like silk in comparison.  Here are my top three grievances, beyond all the small things like clipping issues and full-on crashes (I had the game completely freeze about four times):

Now just a list of things that irk me about the game that I want to vent:

Fallout: New Vegas, a diamond in a turd

I've been spending quite a bit of time with Fallout: New Vegas.  Fallout 3 and TES4: Oblivion are a few of my favorite games of all time, so no amount of bad press was going to keep me away from buying New Vegas.  I'd read reports of games being buggy in the past, and most of the time those bugs didn't affect me.  For example, Civilization V was apparently buggy around its time of release, but the game ran smoothly on my computer.  I expected a few bugs with New Vegas, but nothing game breaking.

Yet I have run into the worst bug I can imagine having.

New Vegas has a ton of companions.  In Fallout 3 I didn't use them, but Obsidian made a big deal out of them in their preview coverage, so I wanted to get one.  After I was about 17 hours into the game, I finally ran across one: Veronica Santangelo.  She was just standing around some trading post in the middle of nowhere and was eager to join up with me after just chatting a bit.  She revealed to me that she was a member of the Brotherhood of Steel, which was cool, so I gave her some Power Armor.  Unfortunately she didn't compliment my melee-focused playstyle with her own melee attacks, but whatever, I figured she was better than having no companion at all.

At this point in the game I was doing missions for the Brotherhood of Steel, going around the wasteland finding missing patrols.  When I found the final missing patrol, I fast traveled back to the Brotherhood's bunker.  When I descended into the bunker, the bug happened.  Veronica walked up to the intercom next to the door to the bunker and got stuck in what looks like a script loop.  She just stands next to the intercom and repeats the word, "Zero" (I think).  At this point I can't talk to her anymore or bring up her companion wheel.  She just stands there repeating, "Zero... Zero... Zero... Zero..." She doesn't even follow me anymore, she stays in the bunker.

Then I made it much worse by clubbing the shit out of her with my Super Sledge.  By doing that, I broke all her limbs.  I was hoping I could maybe kill her or break her out of her script loop, but no good.  Now, despite the fact that she never leaves the bunker intercom, every three minutes or so I can hear her say, "I could really use some new limbs."  I can't heal her.  I can't talk to her.  I can't leave her and I can't kill her.  I even looked up the location of another companion and tried to sub her out and that didn't work.  I'm now stuck with a bugged companion that does nothing but repeat, "I could really use some new limbs," ad nauseum for the rest of the game.  This is just a kick in the dick.

It's a pity because Fallout: New Vegas, underneath the bugs, is better than Fallout 3.  I'm having a ton of fun running around with my Super Sledge, more so than I ever did in Fallout 3 with my Hunting Rifle.  While I miss Liam Neeson, the faction gameplay in New Vegas is a huge improvement on Fallout 3.  I want to love the game but "I COULD REALLY USE SOME NEW LIMBS!"

What was I expecting?

So I'm about nine hours into FFXIII and I finally had my breaking point.  I had read that the game didn't get good until ~20 hours in, but I had assumed that was from the perspective of a non-RPG gamer, from the perspective of a Call of Duty/Madden gamer.  Over the years I've played tons of slow RPGs, RPGs that were too heavy on story and too light on gameplay, but that didn't keep me from enjoying them.  I thought while the first leg of FFXIII might be slow, I didn't think it'd necessarily be bad.

Boy, was I wrong.  The game is just awful.  FFXIII might as well just be a giant movie because the game gives you no choices.  You move forward down a linear path, battle enemies, watch a cutscene, and repeat.  Video games are supposed to be all about creativity, choices and consequences.  The only time I get to make choices in FFXIII is during battle, yet the battle system in the game isn't fun enough to support the game on its own.  I might have kept playing if the story was any good, but unfortunately (yet unsurprisingly) its just as ridiculous and trashy as ever.  It's complete nonsense filled with unlikable characters.

A quick and dirty top 5 games I'm eagerly anticipating for '09:

I assume neither Diablo 3 or Half-Life 2: Episode 3 are on the table for '09, otherwise they'd be on the list.