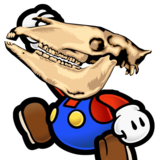 The idea is intriguing to me but I would prefer it to be implemented in a spin-off game ala ODST, as opposed to a mainline title. 343 still haven't made a great Halo game yet, so I would rather see them nail a good classic Halo experience first for Halo Infinite, then they can get creative with spin-offs and side stories.

I hope they tweaked the Concussion Rifle, it was super annoying in Reach but had potential.

I think I read somewhere that they've beefed up the knockback effect. Not sure if that's a good or bad thing, honestly. There are times when it has worked against me in a 1v1 and it's the most annoying thing ever, but at the same time it's also a great defense against sprinting Sword kids.

Really glad to see the Beam Rifle back, if only because it means that I won't have to put up with any more Magnum secondaries in Team Snipers.

@DharmaBum: Ha, I'd totally forgotten about that article. He was up in arms about the weapons no longer spawning on static timers. That's a pretty radical transformation to go from a timing H1 kid to "I love Armor Lock."

Bungie's ViDocs proved that you can make anything look good with proper editing.

Nothing embodies that more than this ViDoc:

I can’t think of a single standard Reach map that will be memorable down the road, whereas with past Halo games, plenty of classics immediately come to mind.

I remember thinking during the end of Halo 3's lifecycle that I wouldn't want any of those maps to be re-made in the future because I didn't think they measured up well to the maps from CE or 2, but Reach's maps are so poor that now with Halo 4 I'm just hoping that 343 has the ability to create something on par with a Narrows or Construct. Although, I have to say that Haven (formerly Wraparound) looks pretty good from the pro player footage we've seen.

@ShaggE: Holograms are confirmed to be back.

-- Move speed: Default move speed still looks way too slow. I don't remember which video it was that the player (I think it was Elamite) used his ordinance to drop the new Speed Boost power-up, but the player traits that he gained after using that power-up should be the new default. When he was using Speed Boost he was moving much faster than normal, his strafe was much more effective, his reload animation was quicker, but sprint and rate of fire were unchanged. Halo 3 speed, while better than Reach's terrible default speed, is still much too slow.

-- Sprint: Could be alright in this game, if the kill times were faster. But it doesn't produce good gameplay when the minimum individual kill times are ~2 seconds (my rough estimate based on that footage of a BR 5-shot) and players can recharge their shields. One of my least favorite aspects of Reach was when I would shoot an opponent down to one-shot and then they would just duck their head and sprint to cover. I could barely notice a difference in sprint speed when the player was taking damage -- if they don't tweak that to make it more punishing before the final game then plenty of players are going to be running from fights with no penalty like they do in Reach.

-- Weapons: Some weapons looked promising (actually just the Carbine and Scattershot), but most of the guns looked pretty ineffective. The BR looks terrible; it reminds me of the pre-patch H2 BR with that horrible spread and a 5sk is way too long. DMR looks alright but I can't make a solid judgement based on the amount of footage shown in those vids. The Carbine wasn't shown much either but from what I could tell it didn't have bloom of any kind, so if it kills in less than 5 minutes it could be a viable weapon. Scattershot looks pretty cool although I don't see it being much more useful than the shotgun (343 kept talking about how you can shoot around corners with it but I haven't seen anyone use it to that effect in the footage we have). I didn't see a single person get a kill with the Sticky Detonator, though I assume it won't be that ineffective once players start to understand how it works a bit better. Storm Rifle seems a bit beefier than the 3/Reach PR but unless they give it Plasma Stun like the H1 PR then I probably won't bother using it much. The AR inexplicably looks more powerful than the Reach version (why the hell do they keep making the easiest gun in the game more effective?). The Rockets seem to have received a big nerf for no good reason; the flight time of the rocket seems to be longer than in the past and the blast radius was decreased pretty noticeably, so hopefully that gets fixed before launch. Not a huge fan of the Magnum being a 6sk with only 8 bullets in the clip, but I guess they're trying to relegate it exclusively to a secondary role so can't fault them too much for that.

-- AAs: Pretty much only saw Promethean Vision in action during this footage, and it was obviously OP. I think a good way to take it down a notch would be to limit the effective range and make it behave more like pulsing sonar instead of being pure X-ray vision. Saw a little bit of the Thruster Pack in action and I like the possibilities for that to be used in strafing/evasion.

-- Overall: Seems like a mixed bag. It looks like a solid core game but it could definitely benefit from an increase in pace, both in terms of kill speeds and movement speeds. I don't know if I would still enjoy playing the build they're showing in this footage after my thousandth game, but I'm cautiously optimistic that they can make some solid improvements before November.

@BraveToaster: If the quality of previous live action Halo productions are any indication, it will be great. Example:

@NTM: 343 has said that you will be fighting Elites and other Covenant early in the campaign as a means of easing players back into Halo gameplay. Then, as the game progresses (after Chief and Cortana crash land on the Forerunner planet Requiem), a new faction of enemies will be introduced that are completely different from the Covenant.

343 announced earlier today that Neil Davidge (probably best known for his contributions to Massive Attack) will be composing the official soundtrack for Halo 4. They also released a short sample of the game's music:

Thoughts? I had never heard of this guy before today and I don't envy anyone who has to follow in Marty O'Donnell's footsteps, but that sample sounded great. Different from the tone and style of previous Halo music, but it still fits the franchise well IMO.

@Tenroe: They're just a temporary foe at the start of the game -- 343 has confirmed that there will be a new faction of enemies once the story progresses a bit.