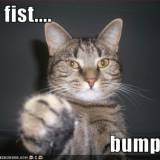 Showdown u vs i

So a few weeks ago I was debating buying a Wii-U. At first I hadn't really given it much thought but wanted something. I like my 360 but with Microsoft crapping that system up with charging you to even access online content that you also have to pay another company to watch, and smearing the dashboard with as many advertisements as they can get away with, I was getting a bit frustrated with it. Add into this that my 360 is on it's last legs and that means I'd have to buy a replacement and I wasn't really wanting to. With a lot of the stuff I do online being on the Wii-U (Netflix & HULU), I was curious. However, after Giantbombs all day coverage of the system I was less curious. There are, however, some decent and fun looking games on the system so I was still torn.

I hemmed and hawed about it all week, last week, and came to the conclusion that if I could find one at a local store on pay-day I'd buy it. I started to call around and see if anyone was even going to have one and it was looking more and more like no one would so I started to wonder if I should even bother. Then a funny thing happened. What I want from gaming has changed over the years. I find myself playing more and more small games and XBLA games and Steam Indie Games than I do AAA titles. I was seriously disappointed by a lot of games this year and maybe it was time to switch. That being said the idea started bubbling up that maybe what I needed was an i-pad. I still want the Wii-U but right now there's not many games and I'm not really interested in wagging a stick to make my character sort of not do anything I want it to so older Wii games are mostly out.

So in the end the decision was made to pick up an i-pad instead and wait a month or 6 on the Wii-U until there's actually more content out for it. So far I'm liking my decision. Other than a 3rd gen original i-pod this is the only other apple product I've ever owned. I don't really like Apple PC's but thanks to the market confusion that Android wished upon themselves that platform's kind of a mess in terms of apps. If you want to play current tablet games i-pads just have more of them. A lot of games eventually do get ported in some manner but several of the ones I was interested in never will be.

I picked up a White i-pad 3 32gig model. I was originally after a 4 with 16 gigs but the couple places near where I live didn't have any, and I really didn't want to go to the Apple store. I'm hoping that the mumbling I hear about the heat is overstated. I've already picked up a few games for it, and a lot of them are board games that I'll be doing reviews of as I play through them.

I'm still hopeful for the Wii-U. I want that thing to do well and I hope these first few games are just rough launch titles and not indicative of what we should expect from the future of the thing. For now though, looks like i won out over u.