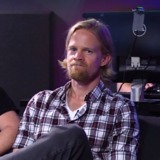 
Still, in the early days of internet FAQs, writers could really make a FAQ something personal, gives a certain flavour to the otherwise faceless screen or sheet of paper, filled with Courier New and weird ASCII representations of a joystick. As if someone sat down next to you, explaining every detail of the game at your own pace, trying to keep the otherwise dry walls of text entertaining.I really, really miss it.

Oh Brave New World, that has such Tweets in it!

Plz you tell it voice to CAPCOM USA !! ;D I wish make New DS!! RT @poeria: a yes would love a new darkstalker#ForAnewDarkstalkersGame

A random twitter from Yoshinori Ono, producer of Street Fighter 4.

You know, it's weird when you think about it. Not too long ago, gamers relied on magazines for video game news. You scrutinize every screen shot, every quote from a developer, every word in a news story. Then came the web: 24 hours, 7 days a week, news at your finger tips! Magazines quickly started having trouble, sites like Kotaku, Joystiq quickly became the go-to sources for news stories.
And then: Twitter happened! Micro-blogging became a quick and easy way to refer to news stories, post thoughts, or, as dear mister Ono is doing above, connect with the other people. And damn it, he singlehandedly kept my interest in Street Fighter 4 up well after its release: him being absolutely adorably childlike in his enthusiasm doesn't help either.

Now here's a dilemma: with developers talking directly to their fan-base, teasing them, doing impromptu Q&A sessions, where does that leave game journalism?

A few days ago, Jeff Green linked this Mashable article (again, over Twitter), discussing the new role of journalism in this new, Web 2.0 age. Extremely short summary: basically, journalists are becoming editors, filtering noise and giving context to news stories as they pop up, and managing information flows, both from the industry side and their audience - sounds familiar, but I won't blow the crew's trumpet just yet! -. On the other hand, Twitter (coupled with the insane rise of podcasts) also provides game journalists an opportunity to be more prolific: for instance, I tend to go to someone like Jeremy Parish or Kat Bailey at 1Up for my RPG fix, someone like John Davison for interesting micro-games on the Apple App Store and yes, our own Giantbomb crew here for a variety of genres.
An interesting aside would be contrasting the rise of stuff like Metacritic ("standardizing" scores) versus this diversification at the journalism end, but that's perhaps something for another time.

Also, looking at the title, I so wish someone would make a service named Twatter.

Do you use Twitter, or do you hate how important it has become? Do you like how you can "stalk" someone, or do you feel a huge sense of TMI, information overload sometimes?
2 Comments

Do you remember how, back in the day, how every platformer on the NES tried to be Mario, but was completely eclipsed by every installment put out by Nintendo? We've seen it happen so many times: the Halo series on the Xboxes, Gran Turismo on the Playstations and of course, the Mario games themselves on all Nintendo consoles.  First party studios always seemed to get an edge over third party competitors, whether it's through better platform holder support, marketing power or just the sheer power of getting bundled with the actual hardware. Of course, there are a few exceptions (Killzone, anyone?), but in general, third party developers have a really hard time beating the first party developers at their own game.
Knowing this, I can't help but feel sorry for the guys at United Front Games. Their first game, Modnation Racers, a PS3 exclusive, can bluntly be pitched as "LittleBigPlant with karts". It was coming out in a few weeks, looked good, had some fairly positive press coverage, and then... The bombshell: Media Molecule, freshly acquired by Sony Computer Entertainment, announced LittleBigPlanet 2. A few bulletpoints: fully backwards compatible with the first game, the trailer showed some features: showcasing the possibility of LBP Shooters, programmable AI, and Racers. Talk about stealing someone's thunder.
We'll have to wait and see how Modnation Racers will perform, but damn, LBP2's announcement can't have done it any good.


Knowing this, I can't help but feel sorry for the guys at United Front Games. The easy pitch for their first game, Modnation Racers, was put it bluntly, "LBP, but with karts". It looked promising, it had fairly positive coverage from the game press, it was a little under two weeks away from its releasedate... And then the bombshell: Media Molecule, freshly acquired by Sony Computer Entertainment, announced LittleBigPlanet 2
6 Comments