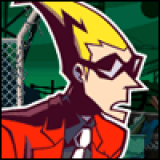 Star Fox Assault is not a very good game. On release, it was met with a sea of 7/10 scores during an era famous for using the "7 to 9 scale", meaning that a game had to be exceptionally bad to see a 6 or lower score from many publications. It also followed up the maligned (by fans, anyway) Star Fox Adventures, a game featuring almost zero gameplay from previous entries in the series, instead favoring a Zelda-style quest where Fox uses a magic staff to save a bunch of happy dinosaurs from an angrier, eviler dinosaur. For many fans, Assault was a return to form of sorts; making me wonder if those scores would have been even lower if not for the bizarre game it was following up. (Ironically, in spite of the near-constant hatred I encountered at the time for Adventures, it still holds a higher Metacritic score than Assault does.)

The game is boring. That's one of the worst things you can say about a game of its type, especially one with such a powerful legacy of fun behind it. But it wasn't just boring; no, it was also written poorly, and had a bare-bones multiplayer that evoked none of the feelings the (still pretty bare-bones) multiplayer from Star Fox 64 did. It put characters from Adventures into the action, who were quite undeveloped and tonally inappropriate for the game, like the mystical blue fox lady who speaks super-formally and talks about magic constantly - a far cry from the endearingly-bad dialogue from previous entries.

I can't explain why it happened with this game specifically, nor have I ever been able to get back into the head-space I was in at the time, but 13-year-old me made a game of his own in the game's not-stellar multiplayer.

You see, a few friends had come over to play games. For those of you even younger than me, that's what you did in those days: friends would come to your house to play Gamecube games with you. And at least in my case, it was usually Gamecube. Sure, some friends would want to play Halo and others would want to… um… I guess that was it, really. Gamecube or Halo. But yeah, Super Smash Bros. Melee was on Gamecube, so that's the console we played together. Anyways, Star Fox Assault was a fresh purchase for me at that point, so we decided to give it a go.

Being young, we actually had fun with it in spite of itself, but the real fun came when one of us presented the previous battle as a story, describing the events that occurred in it as part of some larger whole that wasn't really there. "You see, *character* went rogue, and the team tried to stop him. But *character* flew too well for them, and managed to get away, flying for *location* to reveal the secrets of your operation." (If I remembered any actual details, I would include them, but I don't, unfortunately.)

Once that happened the first time, it happened every time after that. Soon, we had developed imaginary factions that don't actually exist in the game; societies of falcon people who were bitterly at odds with the imperial order, pockets of frog people nomadically wandering through space, and small bands of mercenaries formed out of stragglers from the various factions and cultures. I can't actually remember any of the specifics now, but I remember having a lot of fun telling these stories with my friends based on how our multiplayer matches turned out, the victor always getting to dictate the direction of the plot.

We were role-playing, basically. And it made that experience for me. I now look back at Star Fox Assault fondly, in spite of there being little to nothing in the game itself to inspire those feelings. My friends and I created a world together, and in doing so, I became attached to it. The world of Star Fox doesn't seem to have anything that interesting going on, as far as I'm aware, but our 13-year-old brains brought us to a different world that did.

I have never been able to really have that experience again. I've had some fantastic and unique multiplayer experiences, and I've had experiences where inhabiting a role made a game more fun, but I haven't managed to combine the two the same way since. And I'd honestly feel like an idiot trying to do that today. Part of what made that experience possible in the first place was our youth; I don't think there are many adults out there who really want to improvise stories about multiplayer matches of Star Fox: Assault these days. And if there are, I don't know how many of them are people I'd enjoy hanging out with.

For me, this is a small, singular moment in time. This is a special moment in my video game history that means something to me; it is a memory that I treasure. It was a single day where my friends and I got heavily invested in something that was almost entirely our own creation. We made something together. I don't know if anything is going to evoke that for me again, but I know it's possible. I know that even the most mediocre of games are capable of creating important memories, and it might be something inherent to video games as an artistic medium. It's one of the reasons I love games so much. They're special.

I haven't played it since the mid 2000's, but I liked Star Fox Assault. I didn't have as much silly fun with it as you seem to have, though.

@justin258: I mean, my memories of it, even the ones not involving this story here, are generally positive. I've just kind of heard nothing but negativity towards it in the years since, and I think if I tried to go back to it today,I wouldn't like it nearly as much as I did back then. The things that I do remember liking about it don't seem like they'd be enough for me now. And my vague memories of the plot are... It seems messy.

I'm not going to cast any stones as far as enjoying questionable multiplayer modes for questionable video games on the Nintendo Gamecube is concerned. My friends and I played far too much 007 Nightfire (A fantastic example of a 7/10 game from the early 2000s) until we discovered Halo 2 and realized what a real First Person Shooter looked like. I'm sure we probably played with weird self-imposed rules plenty of times too, though I honestly can't remember most of the specifics. There's certainly something to be said for the tenacity of kids with little money and a lot of free time on their hands.

I never played any Star Fox Assault outside of touching it once at a friend's house, though I did watch part of an LP around when Star Fox Zero came out. It, uh, didn't look very good. At this point, I have far more morbid curiosity for going back to Adventures and seeing how that thing holds up.

@arbitrarywater: Agreed; touching back on Adventures seems like a far more valuable use of time and energy than spending more time with Assault would be. I bet that game is better than we all remember it being, but I also bet it's still not that great.

@arbitrarywater: Oh man, I played entirely too much 007 Nightfire. It was one of the first PS2 games I owned.

I'm really happy to see that someone played Assault in this way. I can't exactly remember if my friends role-played with this game, but it was in the shortlist of games that were completely undeserving of the ridiculous amount of time we put into it. We were young, I suppose.

The one I remember doing with my friends was playing the free-roam City Trial mode in Kirby: Air Ride, and setting up races and challenges where we competed for the various stars. we'd consistently hit the "99:99.99" time limit on the clock with that.

I also liked Star Fox Assault a lot back in the day. I went back to play it a couple years ago and yeaaaaaaahhh, that was a bad idea. That game does not hold up at all.

@mabaseslums Oh yeah, we definitely did that with Air Ride, too. That game was perfect for that sort of thing.

@colonel_pockets Yeah, I don't think I want to go back to it. I'll just keep it preserved as this little gem for as long as I can.