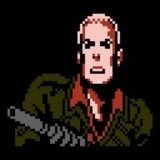 When the second game is the best part of a series.

This is just a list of games that are part of a series that are better than the other games in that series, and happen to be the second game in it. The sequel.

I happen to love the second part (or "dark middle chapter") of a lot of franchises the most. The Empire Strikes Back, The Two Towers, etc. So I figured I'd show that but with video games.

This list is, obviously, not objective. I just think they are the best. You are free to disagree!

I will try to expand this list with games that deserve it, especially as more games in this series come out. Candidates: Half-Life 2, Arkham City, etc

14 items When the second game is the best part of a series.