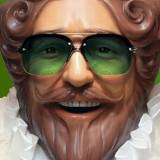 Sometimes when I am watching a stream I have Illustrator & Photoshop open, this was something that took me a couple streams to get finished. Just messing around. Tried to keep the same overall feel as the official logo. Only difference between the 2 versions is the arrow pointing down in the "O" in bomb on the second one.

Here is some MDA art I made, it doesnt match the NES Punch-Out but I had already seen several of those and really I just wanted to try drawing a face in this style...

I made a quick intro animation for Murder Island, check it out... if you want...

here is a design I made while watching the latest Murder Island stream.

(the GB logo is obviously not something I made, took it from the tshirt store ;)

Graboids 2016: A Year of Photoshops & Animations

Posting some of the dumb things I have made over the past year all in once place!

Found a few more I only put on Twitter...

Finished up this animation, finally... took forever to dig through episodes/beastcasts to splice together the audio, like a mini endurance run of my own.... so sorry if the editing is a little rough in spots.... but check it out! Thanks! :)

A few weeks ago on a Game Tapes or Demo Derby, Jeff mentioned Laugh Olympics... I remember that thing and it put the idea in my head to do an 80s Cartoon style opening animation for Giant Bomb. Well, after about 2 weeks of work it is finally done, check it out if ya want! My videos are not #monetized so I just want people to see it... and hopefully enjoy it.

Might want to watch it first before scrolling down if you like to avoid spoilers... spoilers for a dumb animated video, but still... I am going to include some high res screen shots from the video incase anyone wants them, or to just look at them.

I did all the animation myself and I also spliced the audio together from royalty free sound effects and the podcast music that I ripped from old episodes and edited together. I am new at animating, but I am even less awesome at audio, so apologies for the sound quality if its off.

I just started watching Stranger Things, only half way through... so I am late to the party, but I made this poster based of the ST poster... (sorry if anyone already did this and I just didn't see it, not a super original idea I guess)

I made this quick Hitman/HitDan "trailer" just for fun...

just for fun I put together a VRodeo logo while listening to the Bombcast this week...