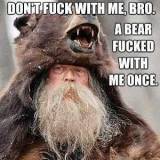 The Solo Player: on friend lists

Ahhhh. Friends lists. Perpetual reminders that you are not alone, even when your technically alone in your room with a keyboard. The starting point of anonymous internet jackassary. When these first came out, I have to admit I was part of the crowd that said they would never catch on and truly hoped they would never catch on. Thankfully, this is probably the only subject I can pick for a first blog post that I wont just go on and on and on about leading to god knows how many related aspects of Soloing exist.

Back in the days of my childhood, we had "Online gaming" but it was entirely different from today. It WAS a solo adventure, because it wasn't truly online and there weren't team matches. Back then I was a unintelligent little kid obsessed with Pokemon and Digimon and Tamagotchi's and platform games, online gaming was going to the mall, or the arcade, or a friends house for a big night of hooking our consoles together or taking turns at the games and bragging about high scores. Online when I started meant finding other players of a game and meeting them to challenge them, thank god for forums and word of mouth. The games on the PlayStation and N64 were the sharpest things we had, so we knew other players on a personal level. I would get online and check various forums to find other players who played Soul Caliber, KoF, MvC, Tekken 3, and the such. We would all end up meeting and having mini tournaments for fun, honor, and bragging rights, and that was online. Hooking up our game boys together to randomly have Pokemon battles, or carrying around the latest crazy handheld wireless game like "POX". I think it was because I grew up in this era that I was so against Friends Lists when they first came out. Back when the original Quake hit shelves I got to see a old schoolmates older brother playing death match, and I almost shit myself. He's playing with other people? From his room? And they AREN'T THERE?!?!?! Queue stereotypical shock and awe. When I first saw the friends list, I remember thinking that it was never going to catch on. Some of the people I recall on that first list were "BaD_A$$153" "I<3UrMum" and "n00biE". It seemed strange to be because I knew all my friends and enemies based on their real names, I would call Justin, Josh and Geoffrey for my backup and I constantly quarreled with Cody, Kevin, Micah,  and Michael, Hunter was like GOD to all of us and Georgia was the girl who we would never admit could kick our asses. Almost everyone I played with I knew on a rather personal basis, even the ones I met and only played with for a single match I would sit down and get to know them.

And then came the PS2. Before the PS2 the only true online gaming was restricted entirely to the PC. Warcraft, Diablo and Star Craft were the holy grails that teenagers played on while never leaving their rooms, the serious business games if you will. With the PS2 came the option for everyone who had internet access to play this way from our houses without ever leaving. Some of the notable games I remember playing were TimeSplitters 2, SplinterCell, Twisted Metal and SWBattlefront  (Beyond the shooters that EVERYONE and their grandma played) and in every game I played I found a strange feeling of separation. I had grown up in the era where playing with other players meant finding them and making efforts to have a personal connection. You couldn't hide behind a user name, you had to actually respect the people you played with and act like you were playing with other people. Thanks to the friends list, all that was dashed away in a heartbeat. As more and more people flocked to the online gaming networks, less people frequented the forums to find people to play with. You had an infinite number of people to play games with and match maker lobbies just set you with people anyway. Your friends list name was who you were.

For a while, I tried it. I had 3 or 4 different names I went by during the early 2000's before I finally settled on my usual moniker of "Grand". It struck me as odd that I would never make connections with the people I played with and I their lack of empathy confusing at first. People were all here to play the game and have fun with other people, except they didn't want to count other people as PEOPLE. Trash talking exceeded levels I had thought were excessive and people really showed nastier sides of themselves. I even remember hearing that video games were now a sport. A SPORT! I spent about 2 hours that day trying to equate being really really good at SOCOM to being a Linebacker  for my school foot ball team, and I failed utterly to do so. The creation of the friends list was the turning point in multi-player video gaming which, while I will admit it did create an environment for the hard core individuals and allow 90% of the gamer population to join in the festivities, it changed the environment and the players in the environment. Eventually I myself found the ability to consider being good at certain video games a sport, and it's a step one never really takes back.

Feel free to add comments or questions regarding this blog post :) Expect the next post next monday, focusing on another aspect, concept or specific game from the eyes of The Solo Player.