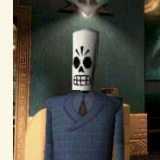 We'll have to wait for E3 to see if there are any stellar examples for the Xbox One--I suspect there will be a few great looking demos. But like last gen, I think it's going to take a year or so before we see anything outstanding graphically on either next gen console. We'll see the easy stuff first--higher resolution textures, faster framerates. Compared to current PC titles, they're just not going to look all that great. The same goes for gameplay. We won't see anything truly new at launch. Most of the games we'll see over the first year will be safe, derivative titles that will sell well and cement the financial stability of the developers. So I'm not expecting fireworks the first year on graphics. Things will look better, but not mind-blowing.

The difference between 30fps and 60fps is often a bit subjective. Obviously 60 is better if you can get it and not sacrifice fidelity, but I'm not quite convinced either console will be able to do it--at least not at 1080p with the textures and effects people seem to want. At least not yet. If I was supposed to be wowed by the COD:G demo, then they failed. It looked good, but not jaw-dropping. Killzone looked cool, but gameplay-wise a bit stale. That's how most of these games are going to look to me. Like stuff that I'd have been happy with on current-gen consoles.

I've yet to be truly impressed. That'll probably change at E3. At least, I hope so.

30fps is usually fine in a game. A good bit of it depends on how responsive the controls are. Some games handle like dogs even at higher framerates. If a game has a solid 30fps frame rate, I'd usually prefer that with better graphics than a game at 60fps. It depends a bit on the game--if you're playing a fighting game, 60fps actually helps. For RPGs, on the other hand, and anything with slower-paced gameplay that doesn't rely on fast reflexes, 30fps is fine. In general, though, I prefer the graphics level turned up rather than having higher framerates.

But it's also true that this is pretty far down on my list of considerations. I'd play a game at 15fps with crappy graphics if it was fun and/or had a compelling story.

#3 haggis
@jazgalaxy said:
I don't think anyone thinks the founding fathers are actually worshipped. I think they just think that reasonable people think that the continual dredging up of the founding fathers as being somehow smarter than modern people, more wise than modern people, and being capable of seeing far into the future in a preternatural way is what makes them seem deified.

That's not why Tea Party people talk about the Founders. They don't think they're wiser than modern people or able to see the future--they talk about the Founders because the principles that they put in the Constitution are important. Unlike the countries of Europe, America was founded on ideas--not religious or racial identity. And understanding what the Founders said about those principles and respecting those ideas is part of understanding who we are as Americans.

Actually, no, they aren't. But we could go back and forth over this forever, and it's hardly worth the effort.

Like the first game, Levine is clearly taking some political jabs, and his denial of it is kind of silly. Of course, he doesn't seem very knowledgeable about the people he's going after. He says it's not about the Tea Party, but it clearly is--it's just he doesn't understand the Tea Party at all. Just like he didn't understand anything about Objectivism when he was taking jabs at that in the first Bioshock. Not that either Objectivists or Tea Partiers are or should be particularly worried about it, if this is the best their critics can do. Levine makes the common mistake of believing what he wants to about political opinions he clearly dislikes--even if those beliefs are simply wrong.

I'm neither a Tea Partier nor an Objectivist (though I am a libertarian), but anyone even passingly familiar with either movement could see both the parallels in the Bioshock games, and the complete ignorance of Levine when it came to both. Otherwise, Levine is a great writer and the games are entertaining. But the political commentary is misguided and shallow. He could have done much better. On the other hand, these sorts of themes in games are never well developed. I've never seen a game handle political commentary with any subtlety. Bioshock Infinite's story is often quite subtle and nuanced, which for me only made the ham-fisted political commentary all the more jarringly out-of-place.

Anyone who thinks Rapture was a "utopia" for Objectivists knows nothing of Objectivism. The same goes for Columbia and American Exceptionalism. The attempt at political commentary in the games is by far its weakest point--strawmen that drag down what are otherwise very good games.

Look into my eye?

Being brutally honest, the end of LucasArts was back in the late 90s/early 00s, when it basically became consumed with feeding the Star Wars prequel marketing machine. Just endless waves of mostly forgettable Star Wars games, with only the occasional hit among them. It gave up on developing new IPs. And in the last few years it's been miss after miss.

Disney clearly doesn't want to be in the video game business, but then I'm not sure the people running LucasArts wanted to be, either.

LucasArts hasn't had a good track record lately, so I can sort-of understand the unwillingness to risk more money on AAA games through it. On the other hand--as someone who spent a lot of time in the 90s playing LucasArts games--I wish they'd found some way to keep the name going.

Games are expensive and risky propositions these days--it's probably a better financial bet to let established developers take over making the games themselves. LucasArts hasn't had a solid hit in quite a while. I'm a bit relieved that they're going to a licensing model. It means we're more likely to get decent Star Wars and Indiana Jones games in the future. I think lots of developers would jump at the chance to play around in those worlds.

It's worth pointing out that The Old Republic was licensed, and it's been a disaster. Much as I don't like this decision due to nostalgia, I think it's probably a good financial decision. Developers need to make good games to survive. LucasArts didn't.

@djou: I guess my problem with all this "it's a scheme to make money" stuff is that they're not making games out of the goodness of their heart. It's a business--and businesses are about making money. It's hardly a scheme--they're being pretty up front about it. Maybe they will go too far, here, with the monetization. But so far they haven't actually tried to sell us anything other than just the game. So calling it a "scheme" seems a bit premature at this point.

Money is certainly part of the whole picture, I just don't think it's the primary issue. And I definitely don't see any evidence that there was some kind of scheme behind this. I think everything I've seen so far is a result of incompetence and frustration. I'm sure there was someone over at Maxis saying "this isn't done." I'd put money down on it. But there can, in fact, be significant harm to a game and a studio that delays a release. It means lost marketing opportunities, higher development costs, delayed work on future projects. Delays can (and have) sunk projects in the past. I'm sure Maxis and EA had quite a few arguments internally over this. Eventually they came to a decision based on a variety of things (including, I'm sure, money). And I'm sure many at the companies were unhappy with the decision. This idea that the game was released this way to make more money, though--sorry, I just can't see it. I think it's more likely they released it this way because it seemed to meet the most criteria for success, and because most of the people working there (everyone but the developers) had no idea how much of a PR mess this would be.

@bisonhero: I would have been more supportive of EA's free game thing if the date cut-off had been, say, anyone who bought the game the first week, when people didn't know the servers weren't working. Pushing the date to the 18th seems to be them trying to entice people to buy it when they're not even sure the servers are going to be up and fully functional.

On the other hand, I don't think it's "scummy" for them to be trying to sell their game, even if it does rub me the wrong way. They didn't have to give anything away, after all. It seems unlikely that anything they did in response to this was going to be completely free of criticism. As far as things go, I don't think the free game thing is the worst of their response. The worst of it has been Lucy Bradsahw's Baghdad Bob-like "we're getting so many positive comments!" bullshit. I wouldn't want her job--it's damned near impossible--but they could at least treat their customers with some respect and be honest.

In comparison to that, the free game bit is damned subtle. :/