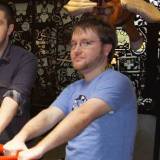 Though I am surprised to see this is not actually my first blog post, it is very close. I hadn't planned on writing anything, but it's 2:00 AM here and I can't sleep, since I have "Get Lucky" playing on a loop and my eyes hurt, so I've decided to write down some thoughts about Ryan. This will be somewhat stream of consciousness, so I apologize in advance if I ramble.

Ryan was a great man. I know that sounds cliched, but it's true, so whatever. I only met him a few times, but he was one of the kindest, most lovable people I have ever met. He just had a sort of magnetic happiness around him. The man could make you feel like he was one of your oldest friends, even if you had never even been in the same room before. As I said, I met him a few times, and I don't know if he even actually remembered me, but he just seemed genuinely happy to see me each and every time. During a meetup I asked him what beer I should get. He said there was a local brew he was drinking that was very good. After he described it I said it sounded good, so he decided to just give me the one he had so I could drink it. Hell, another time, it was the second or third time I'd met him, I can't remember, but we were all in a small bar in Boston. It was the Thursday leading into PAX, and I had foolishly neglected to eat all day. As such, I had a pretty terrible headache. I was just some quiet dude off to the side with his head half rested down on the bar, but Ryan turned to me to see if I was alright and it felt like he was truly concerned for my personal well being more than anything at that moment. When I said I hadn't eaten, he even gave me some leftover dessert stuffs he had from somewhere else (since this bar didn't serve food). The man just seemed to feel most at home giving to others, a sentiment you don't see much of these days, I fear.

I know I didn't know Ryan that well personally, only meeting him 1 or 2 times a year for the last few years, thanks to PAXes. However, throughout the past few years, the miracle of the internet has allowed all of us to watch and listen to him and the entire GiantBomb staff for several hours every week, both with recorded content and live broadcasts. Through so much exposure, coupled with the fact that Ryan was probably the most genuine and sincere person in existence, we as fans come to at least feel as though we know these people, more than any traditional "celebrity" in previous eras. Also, being such a kind and sincere person, I had never really realized it before but Ryan has become one of my role models through my personal interactions with him. With all these things, when I found out early this morning that he had passed I found myself experiencing confusion and an odd melancholy. Later on this afternoon, these feelings turned into a true, piercing sadness, and finally I truly, deeply cried for the first time in eight years, something I have done a few more times this evening.

While nothing good really comes from tragedy, despite what the Lifetime Movie Network or whoever the hell would have you believe, sometimes it can help us see some good that might have been there all along. As we all mourn the loss of this giant of personality, let us remember that we are in fact "us". This community is strong and good hearted, despite what most believe of the internet. Hopefully we can all stay strong together, community members and staffers, forum folks and wiki contributors, mods and........people who are not mods.

The first PAX on the east coast, this show was my own third PAX, and I have to say it carried the legacy quite nicely.  Since we're on the road to E3 currently, there obviously weren't too many big reveals to be had at the show, but what was there was sufficient to sate the appetite of all but the most jaded showgoer.  Here's just a small list of my favorite games from the showfloor.

1. Monday Night Combat:  This game just came out of left field.  I'd never heard of it before Gabe (or Tycho, can't remember which) said it was his favorite game on the floor at the opening Q&A.  After playing a round myself, I have to choose it as my game of show.  Coming out sometime this year for Xbox Live, this game combines Team Fortress 2 and DOTA, with enough visual flair and humorous tone to allow it to stand out as more than a homage to popular past titles.  My favorite class was the Support guy, but that's just because I've always been partial to any class that uses pets, be they giant battle cats or stationary turrets.

2. Shank:  Though they were still showing the same demo level they've had at other shows over the past year or so, this was my first chance to play it, and I was quite impressed with how easy it was to pull off smooth and flashy combos.  With 3 buttons associated with shanks, chainsaw, or guns, it doesn't take long to look like you really know what you're doing, even if it's not the deepest combo system ever.  The comic book look works well with the over the top action, and as long as it remains smooth Shank could be one of the best looking games of the year.

3. Split Second:  I played this game at PAX Prime 2009, and it was one of the most unique and entertaining racing games I've played in a long time.  With the new track they showed us at PAX East, my opinion is solidified even further, especially after I called down the (not) Space Needle to smash a few of my competitors, thus diverting the racetrack to an entirely new rooftop segment.

4. Puzzle Quest 2:  I somehow never got around to playing the first Puzzle Quest, but I respected it for what I saw of it.  This game seems to be much of the same, though the shift from the old map only style of travel to a close range isometric view seems to add some more character to the whole affair, also allowing the player to become more acquainted with their chosen hero.