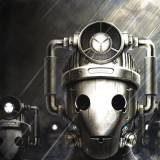 Demon Slayer is just so good looking to watch like One Punch Man season one. It helps that it's not some boring filler movie instead based on an entire arc in the manga.

Recently I've been binging on JoCat with his excellent animations and humor. His take on Monster Hunter and DnD classes is golden. Also Zee Bashew is pretty great.

And if you want to fall into the endless hole known as Warhammer 40k, Bruva Alfabusa is pretty great to enrapture you through its dark humor. While being a parody of Warhammer 40k, I think it does pretty good job laying out the grim dark universe on what you need to know about it.

For the more serious channels, I listen a lot of Renegade Cut and Beau of the Fifth Column for their video essays on current issues or events.

Warhammer 40k: Darktide, Back 4 Blood, Pathfinder: Wrath of the Righteous, and Balder's Gate 3.

Another Front Mission game or even a reboot. Not a watered down Armored Core, Front Mission Evolved. Not whatever Left Alive was. Battletech filled that void for awhile, but I was wanting more campaign content. Also it didn't have... SECRET WANZERS you get off the in game internet... Ugh. I also wished they port the Front Mission 1-5 into a collection for the pc.

This just cements my mistrust for EA/Bioware. Each had their own part to blame for the downfall of Anthem. Anthem Next was a fever dream of a game at best with current day Bioware.

Also it brought so many questions on how it even be implemented like will it be free for current Anthem players and if so what requirements would it be to eligible or will it be entirely new game up.

The last most successful Bioware game released was Dragon Age Inquisition and that a nightmare to make to a point people working on it were hoping it would fail to force management to stop abusing them and stop relying on "Bioware magic."

It's clear to me Bioware has no idea what they're doing or at least in the grips of indecision ever since they announced Dragon Age 4 especially when they said it was going to be "Anthem with dragons!" Which was when? Two years ago?

It's sad now to question if Bioware could make another Star Wars: Knights of the Old Republic and even capture a glint of what that game was.

To say at least I am bitter. I bought the game at launch, liked the foundations, then realized that's all it really had. It's already a given to hold disdain for EA, but we shouldn't remotely give a pass to Bioware after seeing CD Projket with a similar treatment to their developers and team.

I am also very bitter about Cyberpunk 2077.

Finished beating the game yesterday, I got to remark that the story and decision making in this game didn't feel as good as Wasteland 2. Every choice felt forced in the game. I understand you have to make hard choices, but I feel like there was clearly other options on the table that should be there yet due to time or whatever reason they did not want to expand on it. So in the end, the game leaves me with the feeling of being even more unpolished than Wasteland 2.

I had issues with the gameplay like other people being at least one character have to be sacrificed to talk to a npc that you know it will initiate combat allowing that character to be mow down though I was playing on Ranger difficulty. It would not be such a problem if it wasn't the fact for reason they changed initiative in the game.

Initiative is mostly worthless by my accounts unlike Wasteland 2, which was important getting ahead before the enemy in the combat timeline. In Wasteland 3, initiative if the enemy starts combat allows characters with enough initiative have a turn otherwise they lose a turn. Unless you ambush them first with a sneak attack or just up start attack first in which everyone gets goes first.

I keep asking myself why they change it in the first place where it was already a fine mechanic. All I think of make combat faster since you the have potential of wiping out encounters in the first turn. Perhaps setting up combos sort of with some skills synergizing like Mark Target and Trick Shot or leadership skills. But there's not enough of it or at least it make worth it to set it up.

Outside my gripes, I liked the environment, the new factions/mobs, and the APC that backs you up sometimes in combat. Also creating a duo was nice along with a pretty good amount of customization. Wasteland 3 I am hoping gets either dlc or patched or get GoTY edition to expand on the story and tweaks its gameplay. I wanted to like this game so much so I'll come back to it in a few month or year to see how state of the game is then.

Also Necromunda and Balder's Gate 3 is just around the corner so it was probably best to play through Wasteland 3 before those two consumes my life.

I don't know how I feel about the expansion. I pre-order Division 2 and definitely did not regret that unlike Anthem yet as all my friends fell off the game it quickly became a solo experience for endgame wise. I don't know my friends are coming back to game for Warlords of NY and I have my doubts on bringing back players who got into Division 2 an year ago. I feel they are reselling the game again with a little more content attached to it.

I want to back to play again, but I think I'll wait for a major sale on the expansion seeing how the base game cheap for now. Outside of the expansion, I see little reason to come back to game as a solo player after finishing the raid and doing the new areas.

I've been playing Destiny 2 solo and doing the new season pass event and such. After completing the pass, I feel a bit crazy why isn't Division 2 more popular compared like Destiny 2 in terms of QoL and gameplay mechanics. Is it because Destiny 2 base game is free to play? If that's the case, maybe 3$ base game sale for now will repopulate the player base? Is 30$ right now too much for 4 more zones on top of the 11 zones?

Ugh. I don't know. I just feel burnt out as solo player on these loot shooters. I haven't even bother playing mayhem mode on Borderlands 3.

Heyhey guys, I wanted to get back into Division 2 after reading about the armor reworks and updates. I was wondering if any clans are alive right now? I can say that This is the Run has ended and now is The Loading Dock with it being kinda dead.

I was definitely pleasantly surprised how much I like the Surge. I really liked the systems the game laid in place.

The only miffs I had was the hop/blocking mechanics that was awkward for me to use. I am hoping they improve on the ease of use in the Surge 2 since they decided to keep it. The other being the constant thought of "Why is the security forces are not using guns like at all?" I understand in the gameplay perspective, but just in a logical sense I had to shove that thought out of a window when playing.

The kingdom management is frustrating me to the point I going to set to automatic so I can actually explore the map if it isn't broken. I just don't like time pressure in my games. The game just constantly dumping kingdom problems and taking forever to resolve anything through your advisers. On top of that, I find I have to save scum to get any progression due either running into difficult fights or just npc or events being broken. Also so many feat skill not working properly made me download a respec mod for the game to avoid those bugs.

It's nice they're fixing the game, but the patches are too much for my measly internet connection ranging from 500 mb to 22 gb. I think Bard's Tale 4 patches have the same problem as well.

I love the story and the characters, but it's best to hold off until the game is relatively bug free and few more quality of life are added like item highlight toggle or the ability to rotate buildings when you're trying to construct your kingdom.