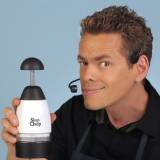 @mooseymcman: Damn. I haven't been keeping up with the team's locations and inter-working much lately. Sad to see. At least Vinny is in my town now. :)

I thought this was supposed to kick back up in the beginning of the year? Was awesome stuff, please resurrect it.

Gone way too soon. Heartfelt condolences to family and friends. Will be sorely missed. Is there a Child's Play campaign I can donate to in his name?

This is exactly why no publisher would touch it. Way over budget. I mean you asked for monumentally less than you got and you still came up only half way there? I completely understand why this would happen as I've seen it happen on software projects again and again, but Kickstarter backers haven't. Can't be good.

Great column, the name is inspiring me to watch the movie for the umpteenth time!

I have hope that Disney will treat star wars correctly the way that marvel has seen a good run. I'm jealous of kids that will get to play with this.

I've bought stuff using browser already on my phone in a pinch so to not lose a sale price. This will definitely make it that much easier to spend money stupidly.

Installing to the HDD on 360 is always a good idea. Microsoft put SSDs on the things (which explains the cost of 360 hard drives being so high..and knowing they are SSD's the price is actually pretty low, you can't get a 250GB drive for that price on a PC.) SSDs are practically indestructible, as far as wear and tear goes, and the fastest drives on the market. With no moving parts, they'll practically last forever. Shame they put such a terrible optical drive next to it.

Bugs always happen in Bethesda releases, its getting to be a running joke at this point, especially after RAGE...but i'm consistently surprised that it's the console players suffering from them. A console is easier to fix bugs on, as the hardware configuration is known in advance, where PCs can have hundreds of different variations of operating systems, hardware, and software running the game.

The PC version does have its bugs - I had a crash at startup I fixed with a tweak to my sound settings, for example. I went PC because I love modding elder scrolls games, and have the hardware to make it look even more impressive than a console can. (I'm a nerd. I like However, don't tell the PC die-hards, I play with a 360 controller :P

Kinda wish the console makers would be less controlling, and let developers push out patches faster. If we need to tolerate patches on consoles, can we at least get them deployed as soon as they're ready? So often i've seen on twitter from indie devs "update will go out any minute on Steam, and we aren't sure how long for XBLA". I have no idea if this is slowing down any Skyrim patches, but i'm sure they're being worked on.

The 360 hard drive is definitely NOT SSD. NOT. I repeat NOT.

They´ve pushed the 360 version pretty heavily.. and now it´s easily the worst looking of the bunch. Way to go Bethesda. I don´t care that much for graphics, but it still bothers me. Well, better than trying to navigate the menus with keyboard I guess.

What were they thinking when they ported the UI over to PC?! Game feels like Gothic 2 or something on PC. Certainly looks cool on there though.

Good thing a 360 pad works a treat with the PC version.

Can I just hook up to USB with the play n' charge adapter?
9 years ago

I found out about the bug while watching Greg play waiting for midnight to roll around so I could walk over to GameStop.

I was watching my wife play it for a while, obviously decided not to install it. Load times weren't that big of a deal and we had it turned up loud enough that the 360 wasn't really audible. I suppose once there's confirmation that the patch is out and it fixes the issue for everyone I'll install it.