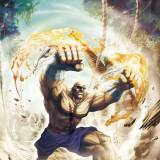 As long as TPP gets released and Kojima was in charge, I'm sure I'll like it. As far as where it all goes from here, I'm excited. I'm a fan of Kojima, not Konami. Wherever he goes, whether he makes another game or decides to try directing a movie, I'll be interested to check it out.

@imsh_pl: I don't know why you're trying to focus on this completely unrelated point. You're saying I can't use my point about the rape simulator because you don't think anyone would play it. Who cares? Whether there are enough people that would buy it and make it profitable or not, I'm trying to make a point that you're completely ignoring.

WHAT IF the rape simulator had enough people to upvote it on Greenlight to be qualified for publication. Would Valve publish it? That's my question and whether the answer is yes or no and why, is the discussion that needs to be happening. Whether or not the 7 billion people on the planet includes enough rape enthusiasts that would want a rape simulator on Steam is completely irrelevant. It's like if we were arguing if you'd ever try eating human flesh or not and you say no, and then I say, "what if you were stranded in a raft out at sea with someone and they died and you knew you were gonna die very soon if you didn't eat them?", and your answer is, "I'd never be out to sea so that couldn't happen. This isn't some trivial bump that you can ignore in your pretend scenario."

Way to never hear of using a hypothetical situation to make a point.

@ibushido: Well, I'd venture the guess that Hatred isn't about rape and rape isn't accepted in the gaming industry like rampant murder. They're different crimes with very different applicable gameplay mechanics. I'd say you murder people in the majority of games because it's a simple and effective hook. It's much easier to take out the emotional impact of murder in a video game.

I know it's not about rape. I'm drawing a comparison. The gameplay mechanics point is lost on me. The mechanics can be altered to be any number of things that are exactly the same. You could have a scrolling prompt, much like guitar hero, and time your button inputs to murder, rape, or do anything else. The mechanics have nothing to do with my point. You are right about it being easier to take out the emotional impact of murder in games, but the developers of Hatred don't try at all. They are simply glorifying the murdering of innocent people.

Look at the Mario games. I just jumped on a Goomba. Did I murder it? Did it cry out in pain? Did it beg me to stop? Do I see its bloody, lifeless body on the ground with a terrified look branded to its cold, dead face?

Look at Uncharted. You kills tons of dudes. You use guns, explosives, or gravity, and murder countless men. How is it different? Well, these men are armed, work for a villain to carry out his dirty deeds, and try to kill you on sight. In this scenario, you are either stopping bad guys from doing harm, or defending yourself. Very different than putting a gun in an innocent woman's mouth as she screams for mercy and then blowing out the back of her head.

What makes you think anyone would want to buy such a game?

I don't know why, but that's completely beside my point. There are a lot of people that find and play rape simulators on the internet. The point is, if one was put on Greenlight, I don't think Steam would publish it. I wanna know why and how it's any different from Hatred, a game that IS getting published. To weed out any quick replies of "because the rape game would break the 'no pornography' rules," I described a text-based one with no images or detailed descriptions.

This is basically the 21st century equivalent of Thrill Kill.

Wow, didn't think anybody remembered that but me. Didn't that game NOT get released though?

I don't understand Steam. Right now they have cheery little elves, watching a shooting star in the night sky, a feature called Family Sharing, and they have rules about not publishing games with pornographic content. Yet somehow, they're ok with Hatred.

What if I were to make a text-based rape simulator? Would Valve publish it? What if it had no imagery at all? What reasons could they give for not publishing it that couldn't also be applied to Hatred?

You see a woman standing alone. You want to rape her.

Nice work. You really raped her good. I'm sure she enjoyed it, even though she didn't say so. The End.

What if that was the entirety of a game with no accompanying images or audio? What if it got enough upvotes on Greenlight? Would Valve publish it? I'm going to take a wild guess and say no.

I don't see a difference between rape simulators and "genocide crusade" simulators and I don't see any consistency with the image that Valve is trying to uphold. Either they are trying to uphold an image, or they are like, "Whatever. We just provide a service. We don't have any standards for the content we provide. We don't tell you what to play and what to like. We don't care what the devs are trying to say with their games or what organizations they might be affiliated with or in support of. Just pay us and get lost."

I've always wanted to stream and back in August finally had everything I needed to start a Twitch stream. It's been a ton of fun and I've been doing what I can to build up my audience. Most of the games I'm playing are on Steam anyway. It seems like now people will have the option of which one to use to watch.

What I'm wondering is, is this a threat to twitch? As someone trying to build up my audience and get more follows and hopefully get partnered, is this bad news? I'm guessing the Steam version doesn't allow for all the creativity involving a Twitch stream like overlays, webcam, followers and notifications, song requests, green screen stuff, etc., but I guess they could eventually add stuff like that if they develop it further. As for now, are those things the only reasons why Twitch would still be the preferred way to watch someone play a game?

I think it's been great so far. The one thing though that I CANNOT stomach anymore is how god damn much he talks about Destiny and wishing it was better than it is. We get it. You wanted it to be a great game. Instead it's great sometimes, and extremely disappointing the rest of the time.

It's like they're having a great podcast, everything is going smoothly, someone makes the huge mistake of mentioning Destiny, it triggers a 20 minute "conversation" of Brad bringing up a few things that miiiight be cooool, Jeff doesn't want to fight so he just goes "mhmm...." and "sure," and everyone just waits silently for Brad to stop. He doesn't stop. He just goes and goes until someone brings up a new game, and even then he might not entirely stop. Might have to skip the game of the year deliberations. We know Destiny shouldn't be on anyone's list, except for most disappointing game, but sure enough, I bet Brad will keep bringing it up and ruining all the fun conversation.

For the record, I like Brad. He's doing a great job. I guess I just hate Destiny and anyone while they're trying to save it from the criticism it deserves.

Thanks for the replies, guys. I love Rogue Legacy, FTL, Spelunky, Binding of Isaac, and other roguelike games. I have streamed a little of FTL and BoI, but BoI seems to be a little too popular, and FTL not popular enough. So far I've only had viewers with Dark Souls, and RE4. Right now I'm doing a shield-only run in Dark Souls cuz I already beat it on stream twice. I just feel like I'm running out of interesting things to do and I need to mix it up. I also love games and want to play all different kinds so that's another reason to try new stuff on stream.