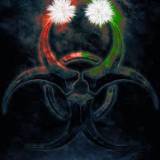 Charlize Theron carries this movie, but I've generally liked her in the things she does; she does 'intense lady' very well, although I wish she'd get more varied roles.

The action scenes when they happen are really well done, if a little generic. Theron's character also has a cool as fuck backstory that is barely touched on. The other main lead is unfortunately pretty weak in my opinion, both as a character and in performance.

Having said all of that, it's not a bad movie. Just more than a bit bland, especially given the subject matter. It's also very explicitly a set up for a sequel (meh) or a tv series (way more interested, if only for Theron's character).

No. What a weird idea. Show me a website that looks the same as it did five years ago and I’ll almost definitely say it’s a bad website.

This isn’t just a website, it’s a business whose business is being a website. That’s some serious Yogi Berra shit, but genuinely their goal has to be to stay on top of a constantly changing content-consuming landscape. On top of that, i honestly think it’s actually better if you want to take advantage of their main output: videos. The organization changes alone make the whole upgrade worthwhile.

I hope the folks who did all the work on the new site don’t read the forums. People put a lot of time and effort into this and others piss all over it because it’s different.

A lot of people (including me) have very specific problems with the new design. The front page is a straight up fucking mess full of redundant carousels and a huge banner of the latest video that somehow still conveys less information than they used to. This isn't about 'oh it's different', I've been following this site since 2009 and have seen all the changes since. All have been 'oh this is different, I'll have to get used to it', but this is the only one where I've actually had problems finding what I want and navigating through content.

There a bad elements to the new the design that should be changed. This isn't people shitting on the site engineers, I'm sure designing a new front-end is hard, but that doesn't excuse mistakes when they've been made. The front page needs to be sorted to better convey information to PC users, and there is a strong argument to bring back the white design of the site, even if this is a hassle. I've never used the white version, so I didn't see what the issue was until people pointed out there is not an insignificant proportion of people who struggle to read white-on-black writing on screens. At that point it's not a 'oh it's different' thing or 'I don't like it' thing, it's a 'I can't use the website now without getting a headache' thing.

But hey, I guess those people are just 'being pissy'.

The new logo is also a fucking travesty.

I think a merger with Motherboard is maybe what will happen. In my opinion the 'dedicated-video games site' is a crowded space right now, and Waypoint doesn't do enough (and isn't established enough) to set itself apart. A site entirely and exclusively dedicated to 'gaming culture' just isn't going to make it as a distinct part of a commercial entity. As pointed out, it could function well as a smaller, fully independent blog supported by Patreon and ad money.

I want this to be kind of self-aware, so Ryan Reynolds is a good choice, I just hope they lean into it. If it tries to emulate the tone of the original cartoon movies, eh...

Hate the new site. It's even worse than the idea to put everyone behind a sterile desk. These changes are not making me want to visit the site or watch the West coast.

Yeah, I felt like kind of a dick who was off base about not liking the new desk they have, but in association with the redesign, you can see a dark trend where GB is just going to become GameSpot's video site. They're very clearly going for a particular look, which screams 'We're intimidated by YouTubers, so we're doing all we can to emulate them'.

I liked them playing on the couches and everything sometimes being on fire or messy, because it was all about GB being a scrappy underdog, and the guys really just all being friends who hang out and play videogames. The casual nature of GB is why I ONLY come to this site, I don't want it to become another GameSpot or IGN.

All the recent changes, especially the new desk and the insane change in logo, feel like decisions being made by a marketing department in CBS somewhere, which is looking to make GB more commercially appealing for the mass market, hip-teen streamer audience. I swear to fucking god if they hire some high-energy 18 year old with green hair I may just cancel my subscription...

Given this is the 'official' feedback thread, I'm going to repost my response from the other thread here, updated with my suggestions for fixing it.

In short; the redesign is a garbage fire, but like a bad one you didn't mean to light.

I like the dark theme (but I get why people who liked the choice for white or black would be pissed), and I like the grouping of videos together into 'shows' or whatever. But fuck the rest of it.

When was the last time a handheld came with a carrying case bundled in? I honestly can't remember.

Anyway can't say I relate to any of the complaints here besides the kickstand (though I've never outright snapped it off, what the heck were you doing to it). As someone who's owned every Nintendo handheld since the original GBA, the Switch is an awesome piece of hardware that I've been very impressed with ever since I got it.

This isn't merely a handheld though, this is a major console with a prominent touch screen. The GameBoys didn't have so sensitive screens, and the DS's closed over the screens to protect them.

I was just opening the stand. I put my fingernail under the edge and pulled backward, after a fair amount of work, it came loose suddenly and I pulled it back too far. The hinge is designed to disengage at that point though, so I didn't break it. Still...

Without knowing his real name/address you're pretty limited I think. Messaging the people on his friends list was a good idea, but I think that's the most you can do.

I like the dark theme, and I like the grouping of videos together into 'shows' or whatever. But fuck the rest of it.