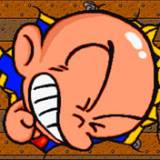 I have far too many unplayed games. Some of which are ones I should've played years ago (looking at you, Max Payne 1 & 2). My unwatched and/or unplayed media pile is nearing the sun. I'm slowly working through it, in what hours I have to do so, but the stack is quite intimidating.

I have an odd relationship with the Zelda franchise. I played a bit, but didn't own any, of the NES or GameBoy titles. I bought Link to the Past for the SNES and spent quite a bit of time slashing grass and upsetting chickens. I picked up Wind Waker for GameCube. But, c'mon, the GameCube wasn't exactly bleeding awesome titles and it was the only then-current console I owned at the time so it wasn't up against a whole lot of competition. Still, when the Wii came out, the first game I bought was Twilight Princess. Then, when Phantom Hourglass for the DS hit shelves, I picked that up too.

Plus, some strange seed of nostalgia drove me to pick up 3D DOT GAME HEROES for the PS3.

Thing is, I cannot tell you why.

I don't dislike the Zelda franchise but I don't have a deep connection with it either. I'm not particularly tied to the concepts but, man, there's something about the core Zelda concept that really sticks with me. That kind of inexplicable connection could very well be what makes Nintendo's pillar franchises so evergreen: They play to something deep inside each of us.

Well, there's more to be said on this than I can put down right now but what started as an aside to my Nintendo @ E3 post may well turn into something larger. Another time though.

While writing this post, I learned that the original Legend of Zelda was released on my 11th birthday. Maybe my connection to the franchise isn't so hard to explain. Perhaps we're paired across the galaxy like star-crossed lovers. If you need me, I'll be bashing a wooden sword against some rocks looking for Rupees.

I feel like I missed something here. From the initial coverage, I didn't find a whole lot that interested me from the Sony camp but apparently those in attendance quite enjoyed the show. Just when Sony really started to sell me on Move, they drop the price bomb. I realize Nintendo set a standard with their Wiimote pricing but, really, does it need to be followed? I don't have the PlayStation Eye which the Move needs so that's another couple bills on the table. The only app that really interested me was Sorcery and that's just not enough.

I'm usually lukewarm on Nintendo's showings. I enjoy Nintendo games well enough; it's just that the company has a history of seeming awkward and unconcerned with its audience. This year's presentation gave me a whole lot to be excited about: Donkey Kong Country Returns, Metroid: Other M, Epic Mickey. But what I'm really anxious to play are Kirby's Epic Yarn and Kid Icarus Uprising.

Pit's first showings on the NES were not great but since the advent of 3D consoles (3D as in polygons not viewing effects), I've thought that Pit could do well in a new game. I'm glad to see he's coming back. While the 3DS wasn't the platform I would have predicted, I'll definitely pick it up and, hey, maybe we can hope there's a Wii title somewhere.

Kirby's Epic Yarn was a left fielder for me. The art style is great, there's some nifty tricks in the use of fabric as a mechanical component, and it has the charm and ingenuity that Nintendo is known for.

It's telling that aside from Gears 3, I'm having a hard time recalling just what Microsoft revealed this year at E3. Of course, just typing that reminded me of Kinect, the official name for Project Natal. Word is that MS will reveal the price point in August but I'm wondering what apps would drive me to pick it up if it's more than, say, $80. Dance Central looks pretty good but I'm not yet convinced I want my body to be the controller.

The new Questing feature officially makes GiantBomb.com my favorite site on the web.

I've had a severe itch for co-op action lately. Already got in some Left 4 Dead and I'm looking forward to some Borderlands. I've played through some missions already in single-player but I reckon the co-op play makes the game sing.

It's great to see Giant Bomb take off like this. I'm really looking forward to seeing how this looks in a year's time with all the contributions that are pouring in.

This is about all I'll use the blog feature for, I reckon.