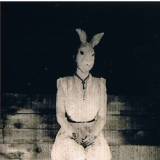 More often than not I listen to review scores. I wouldn't say I'm a well fed sheep but the general populous and I tend to be agreeable on most things. But I guess like most everyone in said populous, I harbour some differences of opinion. Final Fantasy VII? Not my cup of tea. Silent Hill: Downpour? Love it to pieces. It's trivial differences in opinion like that that make us individuals. But being an individual is a scary thing. Being humans as we are, we feel the need for companionship... To socialise with other individuals... Individuals who have their own individual opinions which conflict with your individual opinions... Which then conflicts with your own individuality as you decide whether to be an individual or be among other individuals... Anyway I guess I should y'know, talk about video games so here goes...

KILLER IS DEAD. That is the name of a video game. A video game that has been garnering some mediocre reviews. Here's a thing you should know about me: I love Killer 7. It's true. Now based solely on that tidbit, I walked up to some man in an orange polo shirt, asked him if he had a game called Killer Is Dead for the xbox and gave him around £40 in return for possession of it. I then brought it home, put it in my xbox and waited about a fucking hour for the thing to update since I hadn't turned it on in about 3 months. The game greeted me with a few logos and the a stylish title screen with some delightful music. After fiddling with the options and putting the voices on Japanese, I chose "new game" and picked my difficulty level: "hard".

Another uninteresting fact about me is this: I play most modern action games on hard. I played Bioshock on hard, I played Alice: Madness Returns on hard and most interestingly, I played Silent Hill: Downpour on hard. I mentioned I loved Silent Hill: downpour earlier and I believe a major reason as to why is because my first play-through was on the hard difficulty. Engaging in combat wasn't a chore, it was a struggle and the sound, animations and very notably the controls reflected that. Aside from Silent Hill, I feel playing games on hard substantially enhances my enjoyment of games as one of the many reasons I play them is for a challenge. I understand this isn't for everyone but I do encourage people to give it a try if only the see a game from a different perspective.

The combat in Killer Is Dead feels good to me. Although it is rather mashy, it is also engaging, since timing is important when it comes to blocking and dodging. Playing on hard, these two things are very important as you die pretty quickly. The story elements are surreal, quirky and unmistakably Japanese.

Now, as to the gigolo mode. It is an ugly feature by all means, it's boring, long and mandatory if you want to acquire certain upgrades (Which you will do if playing on hard) Oh yeah, it's also extremely misogynistic. Let me pop off a few more little facts about myself like they were coming straight out of Ice Cube's Tec-9: I consider myself a feminist. I consider video games an art form. I consider a medium of free expression. In this respect I can forgive and even appreciate Suda51 for having something so garishly controvercial in his game.

I'm loving Kill Is Dead so far and I recommend it to anyone who is a fan of Suda51's work as well as anyone looking for a fun, weird action game.

Today in The Twilight Zone: The hardships of young neo-Nazis

Now, this is my first blog, like ever. It's nothing of any importance, I just found something today that I really wanted to share with as many people as I could. Some of you may not share my sense of humor on this but I find it genuinly hilarious. Still, not the most hilarious thing that has happened this weekend but I can save that for another blog.

So, most of you will be familiar with the classic show "The Twilight Zone" I loved this show as a child and it still hold a place in my heart. Well, a series of conversations this morning after waking up with a bit of a hangover at a friends house led us to this Wkipiedia list of "The Twilight Zone" episodes. If you have a scroll down and read some of them you will notice that they are poorly described, sometimes quite hilariously. For example the vague: "A woman waiting at a bus station begins to experiance weird things" And the bizzare: "A man who enjoys loudness begins having problems" But one that stood out above all others. One that renderred us absolutely hysterical with laughter.

The full episode is on youtube and it's an hour long but if you have a certain sense of humor it is so worth it.
9 Comments