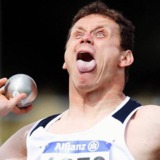 Plucked From The Thought Bucket: Video Games As Art?

Now excuse me for raising something that is perhaps one of the most overly debated and contentious issues in modern video games but hey it's interesting to think about. Bear in mind this issue is probably too excessive for my moderate brain power so if I miss out anything of importance let me know. The first question to answer before thinking about this topic is this, what exactly is art? Now having innedvertantly raised yet another issue for the ages I would like to quickly tackle this question (if that's even possible) from my own viewpoint.

Art is anything labelled as such, art is subjective, art is personal, art is a word with multiple meanings attached, art is an idea separate from physical space, art is seen by the majority as a positive label. When you say the word art what do you think of? Personally my mind immediately goes to painting i.e. art class, snooty men in berets staring thoughtfully at a blank canvas's. However, in the case of video games the word art is used in the descriptive sense, stating that video games have entered the higher echelon of meaning and effect so to be considered alongside other mediums such as literature, painting, film, poetry, photography etc as a high point of human creativity. From my viewpoint art is simply a label, a word placed upon something in order for it to be taken seriously. But who are these people video games need to impress? Do video games need to be art?

Art, as I have already said, is subjective. So to some they are already considered important enough to be labelled that way and for others they are not. Does this mean games should be considered art or not?

My answer, neither. This debate has already happened, inside the head of every person who has ever played a video game. The question "are video games art?" is null and void because the idea of the question itself is wrong. You can't question what is art and isn't art because your own right answer is the right answer. There isn't some art recognition ceremony where some dude with a big beard gets up on stage and scrawls the word "ART" on Mario's arm. Art is anything you feel it is.

I would really like to hear some peoples opinions on this topic, if you have anything you agree or disagree with