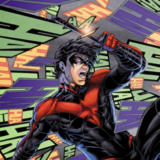 I'll update this sooner or later.

Jordan Hass is the host of "Game Shows, I Suppose" a podcast all about game shows, as well as "Fun Time Calls" a podcast... that's it.

I gotta be honest with you fine folks, as I am writing this, I am sort of in a very "dazed and confused" state. The reason I am putting up my list now, is simply put - I am pretty sure my list won't be anybody's. I did not play any of the real "go to" choices, I didn't play Death Stranding, I didn't play Sekiro or Pokemon Sword/Shield. Simply put, I suck as a consumer of these video games. Did you know Kingdom Hearts III came out this year? I had not that much time to play a battle royale game, which I am told are "still popular". Anyway, here are some of my favorites of the year, and a COUPLE HONORABLE MENTION

I would put "Master Chief Collection" on this list, but the truth is - only Halo Reach is out right now, and I suck at the multiplayer, and there is spawn camping and all the stuff that made me hate Halo near the end of the cycle. But as long as there is Forge Mode, I am happy.

This is the game that really fell under my fingers this year, I did not play it, I am gonna play it, I just need time. Damn It, I Just Need Time. I wish I can say more about this game, but I know if I dig deeper, I'll be spoiled, and I know this is next on my "playlist" (but damn it, priorities)

This year was the game that was all about late 90s nostalgia, but not only that, it was one of the funniest games out this year. I really enjoy playing "Internet Cop" and getting rid of the bad midi websites. It also reminds me, a good world away from internet harassment is possible, but unfortunately, money.

This reminds me of "The Simpsons: Virtual Springfield" for a cartoon series I have never seen. But unlike Virtual Springfield, it has a mystery to unravel and a ton of jokes about modern point and click adventure games, as well as the Yakuza series, and isn't that what you want? Don't you want a Majima Alligator?

8. The Legend of Zelda: Link's Awakening

I like this dorky Link. I spent most of my Halloween playing this game with little to no people knocking on my door asking for candy, I never played the original, but I saw a kirby-based monster, and to me, that makes this also a Kirby Game. Two for One!

I really don't know much about running a Zoo. But I do know Planet Coaster was one of my favorite simulator games to come out in a while, and this was a game I did not really think I would enjoy. But between maintaining animals and exhibitor interest, it really made for a fascinating game. They have an Arctic pack out now where you can see a virtual polar bear before they go extinct because of climate change.

Another year, another Jackbox Party Pack, this year's pack was full of games that can best be described as "things I did in improv class" mixed with a few other games. Here is my rankings

Essentially, Improv Suggestions Make Hack Jokes like "my life is a lot like ____" but I would say, is the closest we got to a "Tee KO" this pack, it does get tiresome after a while.

This is the one that would most likely be your favorite, answer trivia questions, fail and play a deadly game, jump scares, wacky surprises, you ARE the father!

This game is fun if everybody is on call or present at your party, otherwise, you are stuck in a real boring game of "figure out the alien from the few prompt games", it's a great version of warewolf, where the aliens just have to blend in, and leaders get challenged constantly.

This is a game that's good if you are only playing with people you know. It's really tough to figure out which one is the "SAVED BY THE BELL" of the group, and predict who is who. I am NOT the Grumpy Cat.

It's a game I nearly fell asleep to. It's essentially a create-a-word, create-a-definition game, that feels like originally balderdash or fibbage 4 that became this linguistics based game that most likely ends up being weak-ass cards against humanity prompts like penis or poop or urine or semen. ha ha ha ha love to have fun.

The goose is bad, but the game is also wholesome as well. There really isn't any "fail" conditions that much so you can try multiple times in this stealth game, to do the actions, and have a few jokes along the way. People love the bad goose. Honk, my friend, Honk.

You might be saying "Jordan, this game already came out, why are you putting a game that's old on your list, if you excluded Halo Reach"

I like puzzle games, and there isn't really that many fun puzzle games out this year? I'll play this again when i have a few minutes of free time.

I LOVE MY DEMON BOYFRIENDS!

Also, Devil May Cry 5, in my mind, was also a home run, much like DmC. This was a continuation of the Nero saga, but the introduction of V made it fun as well. Also, you still air juggle the demons. That's always fun! Bang Bang, pull my devil trigger.

This game really wasn't shown on Giant Bomb this year, but I gotta tell ya, this game that's currently in early access, is one of my favorite chill-out games of the year. As somebody who would most likely blow through hundreds of dollars at a Dave & Busters, this saves me so much money while giving me that ticket-grabbing fix. And yes, you can win a rasta banana. Any game with a rasta banana deserves a top 3 placement.

Super Mario Maker was my game of the year a few years ago, and this one continues that legacy by being my game of the year this year. Sure, the online multiplayer is sluggish, but I am not here to play competitively. I am here to see what my friends created and share my levels with friends and watch them complete it. My favorite games are the ones that let you share and create, and Mario Maker 2 lets you do all the stuff in the previous game, but with more bullshit gimmicks as well, if that's what you want.

I wish I could've played CONTROL, but I had to catch up on All Elite Wrestling, I expect big things with this "Kenny Omega" person.