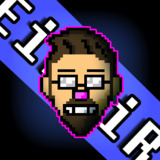 I've been ride or die since the Big Live Live Show (Live!) and nothing is going to change that.

Vinny, Alex and Brad leaving is a swift kick in the teeth, not gonna lie. I'll miss hearing them every Tuesday and Friday on podcasts and on the other shows. The Beastcast got me through the first year of the pandemic as I worked from home with podcasts on and needed some good vibes.

Despite all that has happened, I'm extremely curious what Jeff, Jason, Jan, Jeff and Matt Rorie pull out of their collective, creative minds! Ride or die, baby.

These are super baller! Nice resculpts and add-ons for the Last Canadians, you guys. Now everytime I see these, I have to salute my once-proud, fallen nation. *tears*

As always, great article Tricky! You're still my favourite games journalist and web-writer.... thing guy out there! (That's really a compliment. I'm just an idiot.)

It's hard to pick a side in this argument. I kinda agree with Marcus Beer in the sense that you need a thick skin to deal with shit, and I do feel that Fish is a little too up his own ass about stuff. However, I'm with Fish in that he doesn't need some guy yelling at him and stirring up shit on a podcast. I'm mostly against Fish in the sense that he really, seriously, could've handled that better than going "fuck videogames!" I get it. We all say shit at bad times, but Fish should realize there are tons of people who loved Fez and are into his opinions. The handful of times I've heard him on Giantbomb I've always thought he was a smart, funny guy with a way more level head than what he's shown to have here. I understand there's been a lot of hateful things said to Fish over the years, and sometimes enough is enough. I still think he needs a better pair of big boy pants, and I sincerely hopes he develops some.

With that said, I'm done with some of these attack assholes who can't see a good thing. Fish is a prick, yeah, and it's fine if you're not into his game, but fuck you for calling him slime for not giving comments. He doesn't have to do any of that shit if he doesn't want to. Hell I'd kinda dig it if he just made games from some blown-out apocalypse hole in the middle of Wyoming, just coming out every year to give us a tablet with fresh code chiselled into it and a flash drive with a game burned into it via his magic designer powers. And then he goes back into his hole and never says anything and lets his games be his words. I think that's Fish, and I don't think a designer with the clout of Fish or Blow need to say more than what they've created. It's an odd way of looking at it, but I believe these guys are some of the real proprietors of videogames as art, and when they're dead who the fuck cares if they've given some shitty statement about Microsoft's self publishing policy? In the end it's about the games they make and made and that's what fucking matters.

I kind of get the way Jeff works, and if anything this might strengthen the resolve of the crew and push this website in amazing new directions. Ryan will be missed, but what he worked towards and stood for won't be forgotten. Don't forget that we still have, basically, the same crew and that a few of the gang have just spread out a bit.

Nothing stops Giantbomb, and I'll be damned if I'm going to give up hope on the site so soon. We should never forget the fact that this website brings some amount of joy into all our lives, because Jeff, Brad and Vinny sure as hell don't forget. They love this site as much as we do and then some.

Aw man. This is awful news. It's sad to see him go. Rest in peace, Ryan Davis. I hope wherever you are is filled with hot summer jams.

I'm incog-onna pick this up when it comes out!

Actually I'll wait until I see some trailers and stuff for it, but I loved Klei's last 2 games.

@thehideousshrew: Same here in Canada. Fable 3 was the first free game they launched the day of the Microsoft E3 conference... Which broke the server that Fable 3 was on and I couldn't download it and play it for a week.

I'm sure that Depression Quest is an amazing and well-thought game; however, I'll probably never play it. Like a lot of people I suffer from depression (I've been diagnosed with depression), and recently I've been feeling insanely burned out by school and work and all the other things I do. To battle this, I surround myself with friends, play a crazy amount of videogames, and do other escapist activities like writing. I do a lot of writing. I'm working on my novel and doing script work for a show my friend is looking to get off the ground. Also I write poetry... which is really quite typical when I think about it (depressed poet writing about infinity and beauty, etc.). Depression Quest may hit too close to home for my tastes, like why I can't get past the first season of Breaking Bad; but I do want to play the game. It's just that I don't think I could get into it without sinking further into worries. I think when my head is in a better place I'll play this game.

@toug: Too true, man. Ebert's love of movies is what I feel is brought out with a lot of the Giantbomb community, but in a different light. It's all in how you perceive a piece of art, and that way you perceive that art is what makes it good and artistic.

Ebert's a guy I've always admired. Every time I write a paper or some article I try to channel a piece of Ebert. I've taken a more critical eye, and I've learned to perceive and appreciate art that affects me. I like to think that the stuff I love, I love with a credence and zeal that I can only describe as passion. The stuff I love, I love a lot and I hate to see stuff that fails the mediums I appreciate. His reviews were never perfect, nothing is perfect, but he always gave a thoughtful and well-worded opinion on whatever he was talking about at the time, and that's what I've always strived to emulate.

Great article, Patrick! I think I'll give Warframe a go when it goes into open beta. The Quicklook had me at least intrigued, and this article makes me want to give it a shot.

2008's Dark Sector was... well it wasn't great of course, but there was some heart there. Well, it was a struggling, dying heart but it was beating! Slowly... The game was trying something, and the world of the game gave me a little inkling toward Deus Ex's world so I was at least into it for that. But Warframe's world is something I can really get behind. I just want to see if the game is any good first.