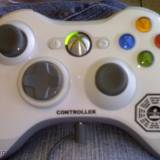 When it comes to my games I am somewhat proud to say I like them violent. In the recent past just about every game I have played, enjoyed and come to love has included some form of violence.rnrnThe first game I ever completed 'all by myself' was Metroid Prime. What can I say; a beautiful female bounty hunter who deals a loss time and time again to some of the universe's most vile space pirates, assassins and a pesky dragon named Ridley. Damn... what girl doesn't wish she was Samus Aran?rnrnAfter that the list of completed games isn't as long as most gamers. Of course it includes every Metroid game made (minus the new Wii version), Castelvania, Assassins Creed, LOST, Mass Effect, Marvel Ultimate Alliance, and of course... well...rnrnThere is this one game that I really love. I mean really, to the point that it has made me utter the words "Not now Bitch!, Its GEARS OF WAR TIME!" to my own mother. At this point you can see that the game I am speaking of is Gears of War. The chainsaw splitting, blood and gore, locust hording, cog rebelling, last stand against unbeatable odds, pistol headshot, Marcus Fenix, hellraising mayhem has changed me to the kind of girl that most people woulnd't expect. I can't wait for Gears of War 2 and my biggest hope it doesn't destroy my college GPA as much as the first one has.