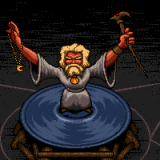 So I found my way to the smith couple days ago and have been wandering around aimlessly since that looking for a way to go. The town is on fire and filled with bandits with hellish hounds as their companions and when I tried to venture even further I barely managed to escape a demon that assaulted me immediately as he saw me. I have not yet had the courage to try to best him and neither have I stayed near the dragon that guards the bridge long enough to see if my steel is strong enough to kill it.

Below the shrine on which the raven brought me I found some catacombs but the undead which slumber in the darkness seem to be unwiling to part from their existence and I need to find a way to keep them down. I suppose I will have to venture further in order to find a answer to this problem. I have not yet felt comfortable enough in either my skill or equipment to descend to the depths of the land by the elevator, but I suppose that is soon the only way I have yet to explore.

The mangled statue by the smith was more intimidating than dangerous thanks to its slow movement. But when venturing to the forests I saw a giant hydra guarding my way, I did not have the courage yet to test whether it truly is as dangerous as it looks. The giants roaming nearby sure fell a lot more easier than I anticipated.

I have to rest now and ponder my next move.