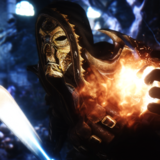 It's impossible to find an online community that isn't full of douche bags.

I bought Too Human at full price.

Skyrim mods are so overrated. The majority of them are garbage. I don't care about mudcrabs having top hats, stupid teddy bear backpacks, or turning every female into an anime sex bot. Also, all of the ENB mods are super heavy handed and lack any subtlety. Aside form the inventory fix or the flying mod, theres nothing out there that actually make the game better, just dumber.

I beg to differ.

Here's a screenshot of me trying out a mod I downloaded, as you can see, me and another mage are locked in a spell duel. Pretty much what the mod does is adds a % chance (which you can modify) of you getting into a spell lock mini game when you and another mage cast a spell at each other at roughly the same time. The aim is to rapidly tap the mouse buttons to overcome your opponents spell and knock their ass to the floor, it's a fantastic mod even though it's still in it's beta stage, because it really adds to the games spell combat and makes it more fun. Now add this and all the awesome armour mods, weapon mods, texture mods, etc and you can really, really add to the games immersion. I only download lore-friendly mods as not to break the games immersion, while running around in a spiderman costume killing English top hat wearing Mudcrabs would be funny, it would just ruin the game for me.

Are there a lot of mods that make the game dumb? Yes, definitely, I do not disagree with that. That said, there are hundreds of mods that improve the game tenfold.

And to answer the OP's question, no, absolutely not. When I played the games on the console version, I never really thought mods would change all that much about the game. Oh how wrong I was, I actually uninstalled all my mods just a few days ago for reasons I won't get into, but before reinstalling them I decided to start up the game and run around for a bit without any mods. The game just felt so empty and boring compared to when the mods are installed, so no, after playing the game with mods I can never go back to playing it without mods.

EDIT: And if anyone likes the look of that spell mod and wishes to try it out here's a link http://skyrim.nexusmods.com/mods/18763 it's still in it's beta stage at the moment so bugs should be expected, but from what I've seen of it so far it is pretty stable.

What's the point? The guy doesn't have a

OK that was awful.

Ohhh tough one. I love many games.

My main hobbies are gaming, reading and watching movies. PC is my main gaming platform but I have an Xbox 360 and a PS3 for exclusives. I love fantasy and sci-fi novels but I can be pretty picky about what I read.

Portal 2 (yes I JUST finished it yesterday despite owning it since it's release) and yes I would DEFINITELY recommend it.

I'm really going to be keeping an eye out for news on this game because it sounds like it could be amazing. I love CD Projekt, I love The Witcher and The Witcher 2 and I love the idea of them making a cyberpunk RPG.

I don't think I'll even bother with this one, I was really disappointed with Gears of War 3. I was really looking forward to it, got the Epic Edition and even bought the season pass, but I haven't even bothered to get any of the DLC so that was a waste of money.

I like the idea of it aiming for an adult audience. Let's just hope it's more accurate than Stormtroopers.