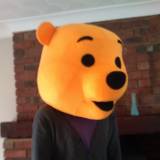 Goddamnit. The commute is a 'little' too far to do every day, but if you decide to start up a Giant Bomb UK wing please give me a call!

I feel like there are more than enough Brits moaning about not living in SF in this thread to make a sardonic, dry-humoured GB totally a thing.

Final exam this Wednesday, but graduating in June with a BA in "English and American Literature with Creative Writing".

Can't decide whether to do a Masters, or look for an internship, or get any job I can and hope to write in my free time and make a move that way. Preferably I'd like to work as a script writer/editor, but I have dipped my toes in journalism and quite enjoy that too.

Basically, I have no idea what to do with my life, but hopefully I can write about such confusion eloquently.

You're a credit to the community, thank you so much for making stuff like this happen! (Added on Steam too, for the record.)

If I was being cheap I'd include MGSHD, but it's hardly "new". Also Hitman and X-Com might blow everything else away, loved the demo of each so much I went and preordered them despite having few funds.

@mrcraggle: I am generally extremely cynical, but I have to admit for as much as I loved a lot of it, there was a lot of shit. The shooters (dismissing games involving shooting such as Hitman etc.) were standard affair in their sameyness, though the Black Ops II area full of shouting wankers was particularly irritating. Fighting game streams have interested me in the past but the commentator as far as I could hear was just yelling things like 'OOOOOOH WHAT A KICK' seemingly for the purpose of giving the audience something to cheer at other than decent gameplay.

I agree with Ni No Kuni, it took me forever to find but once I found it I was so glad I got to play it, I was totally sold. Also thought it was a shame that The Walking Dead 'area' was two machines in a generic Xbox stand, next to four-six rows of Halo 4. Really summed up the state of games, I guess.

And I suppose the biggest crime was that in the Metal Gear 25th Anniversary Zone near the Retro Arcade, they had the original Metal Gear, but no Metal Gear 2 and instead had the non-canon Snake's Revenge. That is true heresy!

@mrcraggle: I enjoyed the press side much more than the 'oh hey look games' side that was going on. But to be totally honest I hate the stereotyped Big-Bang-Theory-popularised view of gamers as over-excitable children who whoop at violence and sex, and I saw a lot of that in the queues as I was waiting. Also the e-sports section with the commentator and thumping dance music reminded me exactly why I dislike nearly all e-sports.

There was certainly a lot of pandering to gamers. As you said, the half-dressed girls in bikinis posing with sweating men clutching Crysis T-shirts was more creepy and sad more than anything. I don't know whether big events like this will ever escape the shadow of generalisation, and going by a lot of the crowd, it's very disheartening to see that most people just embrace it like it's not at all embarrassing to be dressed in a pseudo-dominatrix leather costume to advertise Carmaggedeon.

TL;DR; I have opinions, a lot of opinions.

As press and a first timer with a fellow press friend, was pretty decent.

Took an hour queuing to get in, stood behind a load of weed-smoking guys who were discussing how awesome Black Ops II was going to be, which was kinda lame.

But once we were in, bolted to the MGS Rising demo and whizzed through it with my worries dismissed, and was rewarded with a kinda cool hologrammy poster. Also the queue then grew massively which was nice to avoid.

Spent the next few hours bobbing between games that I wasn't definitely going to buy (although played Hitman to get a bobblehead, and was totally sold on Absolution).

As press, interviewed a few small time developers which was real good fun as amateur writers who had never interviewed anyone before.

Happened to mention we were interviewing somebody to the Air Buccaneers guy when he asked why we were leaving after such a short time, which lead him to then give us both a free copy of the game, which my five minutes with were pretty fun - although I blew up my own teammate figuring out the controls.

Farcry 3, having hated Farcry 2, looked kinda cool when my Farcry-loving friend played through it, though the guy obviously trying to advertise the game going 'the graphics are FUCKING SICK BRO' was a bit off putting. Tomb Raider, as someone who isn't too fussed, was cool, but reminded me ironically of Uncharted. Were the originals so similar?

Gutted to miss Kojima as we arrived half an hour before but found that it was already filled, but we did catch the Day Z guy who was really interesting, and has convinced me to go back to Day Z after I sucked hard at it during the months I played.

Overall, had good fun, which was largely due to having a whale of a time interviewing people with press passes.

It also reminded me how much I hate 1) People who go around like 'BLACK OPS IS SO BRO, BRO' and 'EXPLOSIONS ARE SICK' etc. 2) The women used to advertise games, who are aimed at the worst stereotypes of game-playing males 3) Really obsessive game-playing guys (some may say, hardcore nerds) who refuse to get off games and play the demo multiple times while everyone else waits.

Also why are the seats so close to the TV sets? The graphics look like shit no matter how good the game if you're only a few inches away, and my retinas began to sting after the first few games.

I have a press pass for tomorrow and Friday, but thanks to a seminar I can't go on Fri. Totally excited about Kojima though, hoping to bump into him at some point and get Subsistence signed.

Going sunday too with my girlfriend (who is actually interested in games), though I haven't told her that yet, so hopefully she won't read this!

Regardless, I will be representing with a GB shirt of some kind, or maybe the Tested blockheads tee, so come and say hi if you see me!