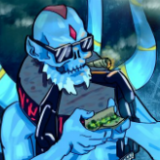 Being a cunt isn't a good way to advertise a game.

Obviously that isn't true at all.

I tried it. It looks like shit and played okay I guess. Didn't like it. And it's so not worth 30 bucks.

Money is subjective, unless you're poor.

Get a fucking job.

The PC version is not very good and also incredibly expensive for what it is. That's why.

There is nothing wrong with the actual game, there are some graphical bugs and technical errors but the game itself is solid as hell.

If you think the game is bad you think Space Hulk is bad. You can have that opinion, but you can't like Space Hulk and hate this game.

That's actually wrong, if you have that opinion you have a wrong opinion.

If I need to pirate a game to get the cost/benefit ratio back in my favor, I probably won't like it anyway. The fact that it's $30 isn't the problem, the part where one of its apparent fans goes and tells me it's worth about a third of that is.

TB loves this shit and even he said it wasn't very good.

I don't understand why everyone has to judge a game by its price.

That's the fucking worst, you people are the worst.

You can say a game is overpriced, but you're basically saying "This game is bad because it is $30."

Have we regressed to a point where this is a coherent argument, where someone can say something this asinine and not be dragged out from their home and beaten in the streets?

Yes, we have. And they are dark times indeed.

A wee bit of buyer's remorse, have we?

Why the fuck would you spend $20 for this shit.

The Space Hulk experts at Rock Paper Shotgun told me it was a mess. WHO DO I BELIEVE?

That review was completely bull shit.

He said there is no simplified board view (there is), that you can't tell where doors are (you can), and that you have to wait for a lengthy animation every time you move your guy (you can issue commands while animations carry out).

Hell, he even complained that people dropped out of online games and took forever to finish their turns. That isn't a review, it's fucking bait.

It isn't a perfect game by any means. It's buggy and has some performance issues, but as far as the game goes it's about as good as you could ask for digitized Space Hulk. The only real issue you could leverage against it is the poorly done hotseat multiplayer and the lack of randomized objectives or mission building, but the first is fixed by just not playing fucking hotseat and the latter may come at a later date.

For what it is right now, it isn't worth $30. It's a solid $10, maybe $15, but that really doesn't fucking matter. The game, on its own and without a price tag attached, is solid as hell. It isn't the board game but then again what the fuck do you expect?