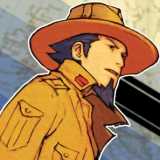 My Extra Life run for 2022 is complete! It went great! https://www.extra-life.org/participant/Justin-Fowler

Will the Real Zelda Please Stand Up?

When Darksiders came out in January 2010, the general consensus was that it was the gritty, mature Zelda game everyone had been wanting Nintendo to make for years. Nintendo themselves was never going to abide, so it was left to someone else (like Vigil Games) to carry the torch. Darksiders II comes out next week, and while I’m sure there will be some changes from the first game, I’d be willing to bet that people will still talk about it referentially in regards to The Legend of Zelda. The Darksiders series is carving out its own space alongside one of gaming’s most revered franchises, and is finding its own fan base defined by those who want Zelda games not called Zelda.

Perhaps I’m in the minority, but I never bought the Darksiders-Zelda comparison. Yes, you got a boomerang, a hookshot and a horse. Yes, there were dungeons where you solved puzzles and fought bosses. Yes, the game played a jingle when you solved a puzzle. And yes, there were what amounted to heart pieces. But in many ways those are surface level comparisons. It’s like saying any 2D game where you run and jump is like Super Mario Bros., or that any game where you shoot a gun from the first person perspective is like Doom. It may be true to some extent, but it also kind of misses the point. You can run down the checklist and tick all the boxes, but Darksiders never really felt like Zelda to me when I played it. The dungeons and puzzles never felt as devious or as intricate, and the overworld never felt as grand or as majestic. There was a certain soul or spirit missing to everything the game did, something that made it feel like a rudimentary collection of mechanics that are often associated with The Legend of Zelda, but have long since become fairly standard in the bigger picture of video game design. Don’t get me wrong; I liked Darksiders just fine for what it was. I simply didn’t see grounds to draw such a strong, direct comparison to Zelda.

Then something funny happened. Almost two years after Darksiders came out the first full blown console Zelda title since 2006 landed on the Wii, and in many ways was a wake up call. The Legend of Zelda: Skyward Sword kind of felt like, well, Darksiders. It had the hookshot and the heart pieces, and played the fancy jingle. What’s more, and what really sparked the comparison, is that Skyward Sword felt like the same straight shooting implementation of those mechanics that Darksiders was. That same defining Zelda spirit that Darksiders missed was also conspicuously absent from Skyward Sword. It was among the least Zelda of all the Zeldas, and while it was a fine game in its own way it left me questioning what it really meant to be a Zelda game.

In my mind The Legend of Zelda is not defined by boomerangs and heart pieces and jingles. It’s defined by something less tangible, a vision at once more abstract and more grand. The first Zelda game I ever played was The Legend of Zelda: A Link to the Past, and my strongest memory of that game is how big it felt; how epic the adventure was, how exciting it felt to be a young, everyday boy going on this enormous quest to save the princess and the kingdom. As cliche as that idea has always been, A Link to the Past imparted a certain gravitas to the journey that made it feel like something more. This is all the more poignant because A Link to the Past wasn’t even that long of a game; certainly not as long as Skyward Sword. And yet it felt bigger somehow. The scope and variety of the world, the freeform way in which you could navigate its intricacies, the way you were invited and sometimes forced to explore and find your own way, the ability to tackle some dungeons in any order you chose. You were thrust into a wild and wondrous world full of seemingly endless possibilities, left to your own wit and resourcefulness to conquer its challenges. This was an adventure in the purest sense of the word, and in some ways video games have never done it better.

That sense of adventure has always been Zelda’s defining trait to me. A Link to the Past had it. Ocarina of Time had it. The Wind Waker had it. I recently played Link’s Awakening for the first time, and almost 20 years after its initial release it still has it. I have yet to play the original The Legend of Zelda, but from talking to those who have, it might have it more than any of them. That very sense of adventure is exactly what I felt both Darksiders and Skyward Sword lacked. There was an adventure of sorts happening on the screen in those games, but I never truly felt a part of it. I never felt like I was in the thick of things in quite the same way, getting my hands dirty trying to survive and save the world at the same time. They were a more passive, guided tour of gameplay mechanics that tend to be associated with Zelda games, rather than exploring what it means to be a Zelda game at heart. Again, that’s not altogether a bad thing. It’s just different.

Then, in an irony of ironies, mere weeks before Skyward Sword hit shelves another game was released that had seemingly nothing to do with The Legend of Zelda. From Software’s Dark Souls took the world by storm, but there was no immediate comparison to Zelda. After all, Dark Souls had no boomerang, no hookshot, no horse, no jingle and no heart pieces. You didn’t go from one dungeon to the next collecting items that you used to solve puzzles and beat bosses, all for the sake of collecting some odd number of ancient trinkets that will save the world. And yet, Dark Souls still managed to feel like a mature, modern day incarnation of the Zelda spirit. This was the big, epic journey that you could easily lose yourself to. This was the intricate and fantastical world that contained countless mysteries and surprises. This was the quest that demanded you be on your toes every step of the way, making use of every resource available. That same feeling I got when I first played A Link to the Past so many years ago was very much present and accounted for in Dark Souls. It represented the notion of a grand adventure as well as any game could hope to do, and I think it’s the best Zelda game to come out in quite some time.

There was a time when The Legend of Zelda name commanded respect as one of the leading forces in gaming, and as one of the leading adventures of our medium. I’m not convinced that’s the case anymore. Zelda has been going through an identity crisis of sorts, and there’s no shortage of pretenders out there. Darksiders and Skyward Sword may lay claim to the Zelda name, but the real Zelda has finally stood up. It’s called Dark Souls.