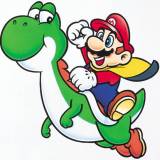 Yes it is up for download today for Europe. The game was released on the SNES I think in the US and Japan in 1995 and it never made it to Europe maybe because it was late in the SNES and maybe Europe thought they would never get to play it.

Today though Europeans can download this top SNES title for only 900 Wii Points. It has been one of the most requested titles to be on the Virtual Console and Europe finally gets to play it. I don't think the US will have to wait to lomng I am expecting it to be avliable to them on Monday.

IT IS SUPER MARIO GALAXY. I have to admit it I didn't have it as my number 1 game in my last top 10 Mario countdown it was second only because it had been out for a month then but all of a sudden it has pushed Super Mario Bros 3 off my number Mario game and is now my number 1 title of all time.

The game has amazing level designing, great graphics and an awesome soundtrack. I have loved Mario music for a very long time but just about all the levels in the game that I absolutely love to listen to. I think all the levels music is the best ever made in a Nintendo game and every level has awesome music to it and to be honest  I think every single level has nice music but these are my top 5 levels music I like in this game.

1. Gusty Garden Galaxy: This is my favourite music in the entire game and basically ever in a videogame. I just really do love this tune so much.

2.Battlerock Galaxy: This music in the game is very nice I think it fits in perfectly with the level.

3.Good Egg Galaxy: What a tune to open the first Galaxy with. It's so wonderful

4. Peaceful Stars: This music is so calm but peaceful to listen to.

Those are some nice tunes in the game I think i listen to them on Youtube. Does anybody else think that the in level music for most levels is amazing to listen to in Super Mario Galaxy.

So far Soul Calibur 4 is alot of fun and I tried online out. Most of the time I can get on but when I do I get owned and take a defeat. What I hate though is even though I am not that good I have come close to winning a few matches some matches I have played I was winning but then it says connection to opponent lost and this was when I was winning as well which annoys me most of all. Yes your opponent probably gets a defeat but you don't get the win. I lost over 12 times and I should have had at least 2 victories. I know things can only get better. I aren't taking it seriously but some people do. I have played over 15 matches and while Ishould have won 2 of them I lost the rest.

I am trying to get better online and I probably will as well. I have no plans on selling this game I enjoy it. I should have won at least a couple of matches but people dissconect and while they lost the match you don't get the win.

I got Soul Calibur 4 for the PS3 today and I have just played it for one hour and my goodness I had a brilliant time on it. It is fun. I played the arcade mode and I used Raphael as my first character and played a few matches and man it really is fun I have been waiting for a game like this to play on my PS3.

I really like it alot. Is it better than Brawl well thats a bit early to say but from what I have played its very addictive. I am gonna continue practing before I play online. Smash Bros Brawl is still my favorite but this game is good.

My top 5 upcoming games this gen

These are the 5 games I am most exicted for at the moment.

5.Soul Calibur 4: It's out in the UK tomorrow and the online looks really good and I love beat em ups.

4.Sonic Unleashed: Out of all the Sonic games that are coming out I am anticapating this the most. Some awesome 2D and 3D types of levels it has excellent graphics and not having to play as annoying characters. Well you play as a Werehog but the gameplay elements don't look to bad. Hopefully SEGA WON'T MESS IT UP.

3.Street Fighter 4: I like the series alot I played on the SEGA Genesis and the SNES and I had alot of fun and it does seem as though the gameplay from prevoius games looks good it. A game that has never done well in 3D. Hopefully the old style gameplay from previous games is there and of course lots of characters new and old and hopefully online play.

2.Little Big Planet: I like the way this game looks I hear you get extra added content online and be able to download new levels. It looks really cool and has alot of potential.  The style of gameplay looks fun and could be one of the best games of 2008.

1. Resident Evil 5: I have watched a few trailers and everytime I see or hear about this game my excitement grows. It is keeping the same formula which made Resident Evil 4 so good. With online co -op going to be aviliable it could be one of the best experiences ever. This enemy that follows you many places and the amount of enemies on you at once and some of them on motorbikes this could be fun. This game is looking so good I am willing to wait till March 2009.

Any opinions of my top 5 most upcoming games this gen.

Whats happening in my normal life

I haven't really been on here much recently because of the weather and playing on a few games and of course going on Gamespot but I have reviewed a few games here.

I have seen that I have had a few images added which I am proud of and I am quiet glad about. I really like it here. It is a new site but I am getting use to it but I do end up having other things on my mind as well. Well I am very hapy to be a part of this site. I have come on everyday and contributed in a few forums and added a few reviews as well.

Anyway whats happening in my life well I am currently playing through Zelda Phantom Hourglass on the DS be very surprised I haven't completed it yet but I really haven't been on it much. I have been on Super Smash Bros Brawl quiet alot and last week I beat Wind Waker again. I haven't really been playing on Mario Kart Wii much lately. I ended up giving Mario and Sonic at the Olympic Games away because I wasn't playing on it.

Hows it going with the PS3 well I haven't been on it much recently and I haven't really got that far into Metal Gear Solid 4. It's not that I don't like the game I think its on of my favourite games of this gen with Super Mario Galaxy and Super Smash Bros Brawl its just sometimes in this hot weather here in England I can't really find time for it and that its so hot here. Don't worry I will be playing on it soon. I am happy I got a PS3.

So what am I gonna be doing well I am getting Soul Calibur 4 for the PS3 I think sometime by the end of the weekend. I am gonna try to complete Zelda Phantom Hourglass by the end of next week. I am also planning going out one day during August for a day trip. All in all things are going well I have a great selection of titles to play and am happy with my games collection and am happy and enjoying life at the moment.

I like it here but I am still learning

I have to say I am enjoying myself here it does make a bit of a change from Gamespot while I am still going on there alot I do like to spend a bit of time here.

Most of my friends from that site have joined some have the same name as they have on Gamespot but some don't. My friends from Gamespot that I enjoy talking to like Hyper Hedgehog, Earthbounder,RowdyRob,Alaska Gamer and SonicBalla and of cause mitu I know very well. They decided to join and I felt with most of them joining I should do the same.

So how have things been here at the moment for me. I am enjoying it here.I like having somewhere else to go to chat about games and other stuff. I am still learning my way round this site but feel as though I am getting more use to it. I have done about 5 reviews and expect alot more and expect some interesting blogs from me in the future. I have just joined here and from what I have seen I am glad I have.

As some of you know me from Gamespot as chocolate1325 I joined yetserday and I am a big fan of the Super Mario series and my favourite Mario game is actually not Super Mario Galaxy if you must know but it is a personal favourite of mine.

So far I have done a few reviews of certain games Super Mario Galaxy,Super Mario 64 and Mario Kart Wii at the moment. I am still actually finding my way round here and I hope soon I will be able to find way round here well. I have made friends with a few other members from Gamespot.

I actually joined here because I wanted to and heard alot of my pals from Gamespot have been doing so and I hope I can make new friends as well here. I am gonna be spending time here everyday and I made lots of friends on Gamespot and hopefuly I can make some more friends here because there I am a popular member there and I will be writtening more reviews and making more friends. I actually think this site looks fantastic and I will be spending more time here as I learn how to use the site better.

Blogs Created:
8 blogs
Most Commented blog:
I like it here but I am still learning
Total Comments on blogs:
75 comments