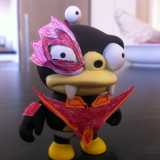 So I finally found a copy and started playing 999.

I was interested after hearing Patrick talking about it on the Bombcast so I decided to give it a go. I've only played the intro room and I thought I might give my initial impressions.

The intro is like trying to run in a pool of molasses. It is frustratingly slow.

I understand wanting to make sure the player knows how to control the game but, for crying out loud, why does it take so damn long to tell me "press x for this, and press y for this". I know it sounds like I'm being petty but I felt like screaming "I know how to play games, just let me play the game, I want to play but you won't let me, just let me tap the briefcase already, I know how to put codes in you don't have to tell me again I literally just did it on the blue one".

I know it's just the tutorial and the rest of the game won't be like this but it was really frustrating and I just had to vent for a bit.

That being said, I am going to keep playing and finish it. Mostly because I have heard good things about it.

However, I am hoping the rest of the game moves a little bit faster...

Two weeks ago he swallowed a shard of bone and perforated his intestine for which he had surgery. He's been up and down for the last week but a few days ago he was looking like he was getting better. He would eat and go for walks and generally looked happy.

However he took a turn last night and when we took him to the vet this morning they told us he had peritonitis and infection had spread to his heart. Being a 13 year old dog, he wouldn't be able to recover from any more surgery and unfortunately he had to be put down.


So it's been a week now and the dog is finally starting to look a bit better.
His tail's wagging and he's eating now.
I don't want to get my hopes up but he might just pull through.
2 Comments


My little buddy Rupert is back home now, it turns out he swallowed a bone shard and it perforated his intestine.
He had surgery and they cut out about 12cm of intestine.
He's still very shaky and the vet made it seem like he's on his last legs.
I'm still a little depressed (and a little drunk).
I've had him since I was 8...
1 Comments

So I just got back from the vet...

For a long time, my avatar here on Giant Bomb has been my dog Rupert.

He's about 12 now so he's pretty old for a beagle but he's always acted like a big puppy.

So it was rather strange that he has so listless today and when it came to feed him he could barely walk and wouldn't eat.

I rushed him to the vet and she said he's not looking good. He's had a blood test and he's going to have an ultrasound tomorrow morning.

She said it could just be a gastro infection or it could even be cancer. Unfortunately he's in a bit of pain and I felt bad just leaving him there.

I'm hoping for the best but I'm a bit depressed at the moment.

tips for buying my first guitar


I decided after some consideration to learn guitar.
So I was going to go get an electric guitar that I can mess around with and teach myself some stuff.

I have been looking at Maton guitars (coz it's an Aussie company) and they seem pretty cool but I really have no idea.
Any tips for me? Should I get the expensive guitar but then buy an entry level guitar as well to learn on that?

Edit:
Okay, I went down to the music shop (Better Music, in Philip) and after hours of looking I was constantly drawn back this one guitar...
The Maton MS503.


It sounds brilliant, feels great and looks awesome.
I also got a Roland Cube amp.
Thanks so much for all your tips and suggestions, you really helped a lot.


Happy Australia Day everybody, even those not in Australia.
Hope your day is full of beer, barbies, beaches and...er...babes? yeah that works.
So I invite all of Giant Bomb to raise a glass to Australia today, or if you don't want to that's fine it's no worries either way...

On a personal note I unfortunately won't be able to enjoy it because I have to work to day from 9 til 5.
But I'm okay with it because I get double time and a half which is about $50 an hour.
14 Comments

UPDATE:
I got a job YAY!
I printed up a whole bunch of CVs and went to go out on a mission and the first place I stopped at gave me a job straight away
They weren't advertising so I guess it pays to go in personally and not just apply online and hope for the best
I am working at Magnet Mart (which is a hardware store in Canberra) for a decent wage of $19 something per hour for weekdays, $23 smething for Saturdays, and $28 something for Sundays. Not bad for my first job.
Plus it's Australia Day soon so if I can get rostered on I will probably get double pay.
Only problem now is that I gotta go to work for 7am most days.

ORIGINAL POST:
So, here's the thing.
In high school, I was a student full time. All the free timeI had I used for study or hanging out with my mates. So as the years went on I never had the urge or need to go get a job.
After high school I went straight to uni as a boy of 17 with all the fun of not being able to go to any O-week festivities because I was three months too young.
Like before, my free time was taken up by classes, study and socialising. Now as my third year has finished and I have another 2 to go, I figured why not spread out my subjects and do two subjects this next semester and get some casual work as well.
Little did I know how naive I was.
For now I am a 20 year old university student with no previous work experience looking for casual work in the school holidays after christmas and when most positions are filled by cheaper, teenage workers.
This is where focusing on your studies first gets you I guess...
42 Comments


Okay...
I have Windows 7, it locked up and blue screened now it's alternating between giving me "disc boot failure insert system disc and press enter"
this time it's not  Batman's fault

but it happened right after I bought and installed the Tex Murphy games that were in the GOG sale
so I can see what happened here
clearly it's TEX MURPHY'S FAULT
damn you Tex...damn you

EDIT:
fixed now
don't know how
I still blame Batman and Tex Murphy...
It's no coincidence that this happened when I was playing games featuring the world's greatest dectective (Batman) and the... private investigator (Tex)
they're out to get me
16 Comments

It has been a long time since I played WOW, like I stopped just after Burning Crusade came out and I never bought it.
But watching the Quick Look for Cataclysm gave me an urge for it. I don't know why, it just did.
I can't get back into it now...can I?
I mean, when I bought WOW it was on about 5 discs and I don't know where they are now so I'll have to buy it again.
Then there are what, three expansions now? So now this urge I had would cost me a lot of money and I don't know if it's worth it...probably not.
Still...I kinda wanna play it.
urgh...