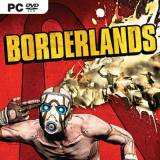 new games? Why not old games

I have too litle time to play games.  as a result I have found myself in a place where all the games I'm playing are at least 1 year old.  One bonus is they're cheap.  And Borderlands I started when it was new...

I probably won't even be done with Dragon Age by the time the sequel comes out, and Fallout 3 GOTY in in my queue.  Can someone give me a giant vacation so I can do nothing but play video games and catch up  a little bit?

You know you play too many video games when...

upon hearing that my daughter had been throwing up all morning, I started thinking about boomers from Left 4 dead.

Have a feeling hockey is going to keep my gaming down to a minimum.   Which kinda' sucks seeing as I have about a zillion hours of Dragon age to get through.

Well, at least as long as the Pens are playing.

Why can't I quit you, Borderlands

As well established by my history, I am a slow-ass gamer.  Not helping is the fact that right now, despite having Dragon Age started, and knowing I have about a billion other games I want to play (hello Just Cause 2), I am still going back and forth to Borderlands.  Too much loot-whoring fun.  And I haven't even obtained Fort Knoxx yet.  HAve to get to level 50 first.  Sigh.

I remember thinking that S.T.A.L.K.E.R. Shadow of Chenobyl looked like a cool game when it came out, but I avoided it after reading what an unabashed bug-fest it was on initial release.  I then went through the exact same process with Clear Sky!

Now, I get to play Shadow of Chernobyl for cheap (although 20.00 on Steam became 25.00 due to economic bullshit that sees the Canadian dollar drop relative to the US, despite the fact it is the US with a major economic crisis right now, while Canada just has fear of hitting one if the US drags us down with them.  Ahem).

So far, so good.  Very moody little piece of software.  Very different from Crysis (which I am playing through at the same time).  I have to admit, I have more fun with Crysis, although I appreciate much of what Stalker is doing.  It's just a little too slow-paced for me thus far.

I'm almost hoping the next backlog game ISN'T available on the PC, just so I can get to some of the titles on my personal backlog list.  Such as actually resuming my NWN2 campaign.  I also haven't gotten around to Bionic Commando Rearmed either, but I blame that mostly on it not staring at me from the Steam client.  Get with it Capcom!  At least my PC runs everything fantastic when every other game I play is a couple years old (or more).

Done with Indigo Prophecy, back to the graphical beauty of Crysis

Wow.  I actually managed to keep up and finish the game in time with the 1UpFM backlog.  The ending was... interesting.  I'm happy enough with it, as the only proper way to satisfy the loads of questions the crazy-ass plot puts up would require a Kojima-style 30 minute cutscene to explain everything.  And given this games methods, they would make you do more "IDE" events during said cutscene.

And yes, the m-fers made me climb another pole.  Luckily I am wise to their tricks, so by switching to keyboard controls I had no problems.  Incidentally, I tried some of the 'simon says' events using the keyboard controls - also way easier than the gamepad.  Now I can continue the internal debate - do my joystick skills suck that badly, is my joystick crap, or was the porting to PC the culprit...

Now then, on to a second play-through of Crysis to warm me up for Crysis: Warhead.  I don't know if there is actually a colon in the title or not, but it is a video game, so it can't be a bad guess!  Should be nice to see faces that aren't made of  2005-era straight lines!

Warning:  This blog post will contain profanity unless Giant Bomb Gestapo have implemented a filter system.  You have been warned.  Avert your eyes, sensitve readers!

I find myself now getting into the bat-shit crazy plot of Indigo Prophecy.  That being said, this post is to complain miserably about one particular sequence where either the game designers are at fault, or my controller is a piece of shit.

So, I'm playing on PC, but using my Logitech controller since the game was clearly designed with dual sticks in mind.  The "Simon Says" QTEs scream out for using the sticks, and now that I'm playing more, they're getting easier as the game goes on.  Still occasionally it seems they ignore my input, or mark it wrong when I damn well know it was right. (or left, or up, or down).  Now, this is where my doubts about my controller creep in.  I've never had problems with the Logitech before, but I still have doubts planted in my mind.  Given that it's worked for everything else, why should I go buy an X-bo 360 controller for double the price unless I'm guaranteed it will work better...

Anyways, to the rage:  So playing the other night, I managed to feel totally bad-ass as I whooped numerous cops asses, sucessfully dodged through incoming traffic (on foot, no less), and then swung off a police helicopter, onto a subway and escaped.  Dude , I was totally bad-ass.  Except that then, when I wanted to get to my ex-girlfriends apartment and had to sneak around the cops, I was reduced from tense to stressed, to depressed to overwrought, to dead.  And the culprit?  A motherfucking drain pipe.  Climbing is supposed to be a simple, repetive, push the stick to one side and curl up, then do it with the opposite direction.  Over and over and over to climb the worlds tallest drainpipe.  Problem is, 1/3 times my controller would not accept my movements, and plunge me off the drainpipe.  Clearly this caused our hero to have a horrible flashback to failing rope-climbing in gym class, and thus his psyche was hurt, and suicide was not far away.  Over and over and over.  Fuck you, Indigo Prophecy!  My goddamn bad-ass can swing of a helicopter onto the motherfucking subway, but he can't climb a goddamn drainpipe?!!  Fuck you!

After managing to completely destroy myself thrice, I quit the game and barely managed to avoid hurling my controller across the room.  Calmed myself down and came back later and switched to keyboard/mouse control.

Keyboard/mouse felt horribly awkward for moving about the world, but was enough to get me to the dreaded drainpipe.  3 attempts later, (no deaths), I had the mouse controls for climbing mastered and was on my way.  Promptly switched back to the controller since the PC version apparently won't let you use both, and promptly found out I woudl then have to climb down another drainpipe.  Shit.  Decided that falling wouldn't be so bad, so naturally I failed.  Luckily, you can't fall upwards!

Of course, now I shall question the need for a new controller incessantly...

Well, I'm continuing play and at least warming up to how to play the QTEs.  Still find them a bit distracting, as there is some cool stuff going on that you can't pay attention to if you want to succeed.  Alas.

Amusing part of last night was when I was able to tell the wife that yes, I'd move the bassinet to the basement, "right after my gay wine-toting neighbor finishes telling my fortune."  Kudos to the writers - that kind of shit can't be easy to come up with.

This month, the game of choice is Indigo Prophecy.  Totally trying too hard to do the video-game movie mix.  There are parts I totally dig, bug the QTEs are occasionally extremely annoying.

One high point aside from the story-telling (so far) is watching my wife give me the People's Eyebrow when she walks in to find me playing a weight-lifting mini-game that involves mashing two buttons alternately.

I'll finish the game because I want to see how the story plays out, but I fear I will be more than sick of their QTEs.  I'd rather they keep the basic plot and limit the "gameplay" to more traditional adventure game roots.  But then I suppose the game would have been "too simplistic" and never been published.

Also, as a result, I find myself quite undecided as to what to think of the upcoming Heavy Rain.  It will be interesting to read reviews to see if the game 'play' elements are tweaked to feel more natural/less infuriating.

Lament of the Lonely Gamer

I'm oldish.  The first video game I personally owned (besides a text adventure game whose name I don't recall that I "shared" with my brother, was the classic Burger Time.  With any luck, I will update that entry here on Giant Bomb eventually.

The downside of being old enough to have played 4-color Burger time and remember the joy of upgrading to a VGA graphics card is that very few of my friends are also gamers.  So I sit with zero friends on Steam.  Had a buddy who I used to be able to play BF2 every once in a while, but he got sucked into the WOW vortex and may never return.

So now I tend to play more single player games than multiplayer, simply because I can.  I normally don't mind being anti-social, but it would be kind of cool to compare scores in Audiosurf with people I quasi-know, and I'm thinking the upcoming, making me drool Left 4 Dead will be best played with real people as your party members.

So now I sit a lonely loner on Steam.

Now if you'll excuse me, I think I'll go away to ponder the joy of the classic Apple IIe Moon Patrol.