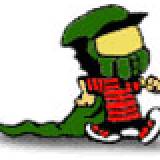 Last time I shill for Atlus.

DS2RB was the last game I worked on a year ago, and it's finally out! I hope you SMT fans enjoy it! Lots of blood, sweat, and tears went into making the deadlines last year.

I miss all those great people.

Making a renewed effort to write some more about video games now that I'm out of the industry. I need an outlet!

I've started digging into my Steam sale purchases. Been drowning in work for the past couple of months so it's refreshing to play a whole bunch of games for once.

Child of Light and Transistor are simply wonderful. The latter is giving me a sensory overload and in the best possible way. This humming simulator has lived up to every expectation I had for it. I'm also working through Season 2 of The Walking Dead as best as my feels can tolerate. Don't feed wild dogs, kids.

On the other hand, a few of my buys have been "meh". I enjoy the Lovecrafty flair of They Bleed Pixels, but I had forgotten how bad I was at Difficult Platformers, so I'm just about to give up on the third stage. I picked up the Director's Cut of Deus Ex: Human Revolution but am probably gonna wait to restart the game. Again.

Finally, my usual ground pounding brainless games for when I only have 20 minutes a day between work. I like fooling around in Battlefield 3 and Fallout: New Vegas every now and then. I inch forward in Dragon Age II when I have a lot of patience. SD Gundam G Generation: Overworld is my go-to portable time-waster, and the nonsensical story of the latest Super Robot Taisen game is finally starting to come together.

"Hey, everybody, it's Tuesday!"

It's painful to realize that we will never hear those words from him again. It's the passion that guys like Ryan brought to Giant Bomb that inspired me to become deeply passionate about this hobby and industry, during a certain low in my life. As Nick Robinson said, it says a lot about the work Ryan has done that so many of us internet strangers feel like we've lost a real blood relative.

Thank you Ryan for making the world a more joyful place, and my best wishes to his friends and family during these hard times.

I think we can all be a little sillier today and maybe even from now on, if only to honor his absence. I wanted to meet him someday and tell him he inspired me to get an industry job.

Finally got PSP recording working! This is a test case for future Let's Play/Endurance Run-style videos. If you have any tips or suggestions on style, production, etc, please let me know in the comments!

RemoteJoyLite USB video capture, and FRAPS to record both video and audio streams into one file. Resized and encoded via Avidemux, MP4 (x264 + AAC).

DISCLAIMER: I worked on this game. This is merely a translation of Famitsu and does not reflect the opinions of Index/Atlus or its staff. I will not be answering questions about Atlus.

So this is an unusual piece of press - Famitsu ran an article on our localization of Persona 4 Golden. Damned proud of everyone who worked on this.

I often play the North American localizations of Japanese games, for one reason - to experience the games I love again for the first time. In the case of RPGs, I obviously want to see the characters’ new English lines, but it’s also interesting to discover the little changes in the graphics or cutscenes. This time, I’ll be taking a look at the much-anticipated Persona 4 Golden (henceforth, P4G) for North America.

P4G is an RPG in which the player experiences a high school-like lifestyle while solving mysteries with “Persona”, the power of the heart. Despite being set the rural Japanese countryside, it has been well received by North American gamers. Why is that, you might ask? To me, it could be something like a new experience for this auidence. The story follows a high school student protagonist who has just moved to the countryside from the city. Along the way the player meets new friends and family, lives life with them day by day, experiencing school, the beach, a fireworks festival, a field trip, Halloween, Christmas, Japanese New Year, a ski trip, Valentine’s Day, and more - all once-in-a-lifetime high school experiences that money cannot buy. While even a Japanese player would be hard pressed to find a game that recalls youthful experiences so well, an American player might well learn a lot about the average Japanese high school student’s life, and get just that much more out of the game!

Also of note in the NA version are the use of honorifics such as “-san” and “-kun”, which are used as they are in the Japanese text. This is itself quite rare. Of course, it serves to highlight the Japaneseness of the characters, as well as clarifying their relationships to each other. Allow me to use the protagonist’s friends Hanamura Yousuke and Satonaka Chie as an example. In the Japanese version, Yousuke often calls Chie by her surname “Satonaka.” In the NA version, “Satonaka” is used, but he calls her “Chie” when they face her in the first dungeon. It’s rather interesting that this change was not made in the Japanese version! A few other changes of note are the now translated projector display in dungeons (bottom left of screen), and changes to item names such as the dungeon exit item “kaereeru” (TL: it sounds like “you can go home”) to “Goho-M”. I could really feel the translators’ passion and good humor. Though it’s in a different language, this game is unmistakably P4G.

Those who want to re-experience great Japanese games for the first time have a lot to look forward to!

Sidebar: Can we use it now!? The English of P4G

This victory line after a battle is a nod to Chie’s passion for all things kung fu. It sounds like something a martial arts star would say.

Kuma’s puns have survived in English. His name was also changed to Teddie in the localization. A bear reference?

Marie’s response when the protagonist overhears an interesting poem of hers. She throws every insult she can think of into a single word!

I work at a game publisher, so we've had the Vita for a while now. Finally got my hands on it for a few hours yesterday (people are practically fighting over it) so I've jotted down my thoughts here:

I'm reminded of the Samsung Galaxy Nexus, big slab of a smartphone that it is (though this is much larger).

Specifically, I spent some time playing with the UI and functions, then jumped into Blazblue and a couple other Japanese titles. The new display is VERY high resolution and performance-wise hardware does appear to live up to what was shown at past conferences.

The placement of the face buttons is a little too close to the analog sticks, and I found my thumb covering the speakers very often, unfortunately.

Mine had wi-fi enabled, but unfortunately I didn't have a chance to test any online features.

If you follow Kojima Hideo's Twitter feed, you probably know that he rarely talks about games, preferring to post tidbits about  his daily life/travels, or photos of his good eats. Minutes ago, he tweeted a bit about his feelings towards flying, which I've translated and reposted here because I found them whimsical and amusing.

I actually retweeted them with some effort, but 160 character limits are far harder to manage in English than Japanese, so it makes more sense to just reblog them somewhere with more room.
----------------------------------------------------
"I always used to sit by the window on airplane flights. I loved taking pictures of the sky, clouds, and towns as we flew past. Well, since then I've been requesting aisle seats so I can have an easier time getting to the restroom. When I consider that I'm using the proximity of the toilet as an excuse for it, I feel like I've become a boring, middle-aged guy.

Mizuguchi Tetsuya-san always has a beautiful photo of the sky on his blog. And on a flight, I even heard  Uemura Kana-san of "The Toilet God" fame say, "Whenever I fly, I always sit by the window so I can watch the sky and clouds." One doesn't get to travel the skies often, after all; I should make the most of it. I think I'll start taking window seats again from now on."

I'm not "middle-aged" quite yet, but I've traveled more than often enough to sympathize with the poor man.