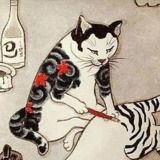 I met a devil woman/ She took my heart away/ She said, I've had it comin' to me/ But I wanted it that way/ I think that any love i...

Revolutionaries at Sony: The Making of the Sony Playstation

Nobody seems to know much about how the Playstation really came about.  There is heresay, rumor and just downright falsehoods that are brayed on forums, but few know any of teh story from first hand accounts.  So I plan, as a book review, to take some bits from a book about how Playstation came about, and also talk about what it.  I'm doing this as a blog that I won't limk to the forum for a reason.  Moreover this book was written in 1997/98 so figures are based on past prices and the full accomplishmenst of PlayStation were not know.  Think of what you read a window to the past.  NOTE: Please do not cut & paste what I trasnscribe here because this took a lot of effort in trasnscription, but please feel free to 'link' to this blog if you like what you have read.

Revolutionaries at Sony: The Making of the Sony Playstation and The Visionaries Who Conquered The World of Video Games


THE ENCOUNTER WITH SYSTEM G

It was September of 1984, in a room at a Sony factory in Atsugi Japan. An incredibly stunning picture was taking form on the monitor before Ken Kutaragi's eyes. On the screen was a computer-generated image of a person's face. The image changed shape at the touch of a slide control. The face would become bigger or smaller, merge with and then separate from adjacent objects.

The computer graphics system-called System G, the "G" from gazo (Japanese for 'image') was revolutionary in that it was capable of real-time 3-D texture mapping. The image not only moved instantly on command, but also appeared to be a substantive object. Even at that time such movement could be achieved after time-consuming calculations movement command sequences, but this was the only system that could change the shape of an image instantaneously. Kutaragi today a vice president of Sony Computer Entertainment, Inc. (SCEI), was astonished that the image moved at the touch of a switch. He recalls, "It was far more advanced than state-of-the-art graphics systems of the time. It was awesome. I was really impressed that such a thing existed.''

System G was a geometric engine for 3-D processing developed for broadcasting networks. An example of a current application is its use by Nippon Television Network Co. to change the size of computer-generated faces in the popular TV program Denpa Shonen.

At the time, the Information Processing Research Center (now disbanded) was the nerve center of Sony's research in digital signal processing. The center's work spanned a broad range of digital technologies, including data compression, networking, and communication protocols. Rutabaga was one of its researchers. It can only be described as fate that Kutaragi was working there, that the System G prototype had just been completed, and that the paths of this man and this technology had crossed.

As Kutaragi watched the freely moving image produced by System G, inspiration struck. What a powerful game machine we could make with System G,'' he thought. This was the moment when the concept of a system that later blossomed into the Playstation was born: a graphics computer that anyone can use. What fascinating, exciting games people could play if System G were combined with a game machine. The Famicom (short for family computers) game machines popular at the time displayed simple, two-dimensional images, but their entertainment value was outstanding. How wonderful it would be, thought Kutaragi, if the Famicom standard could be enhanced with System G.

Kutaragi had always been fascinated by computer graphics. The subject of his university thesis was how to apply computer graphics to medical equipment. The study explored methods of detecting abnormalities from CT scanned X-ray images and individual hemoglobin shapes, and methods of extracting deformed cell nuclei and making them more visible. Because of his interest in computer graphics, he realized at once how revolutionary System G was.

But Kutagari's fascination went beyond computer graphics-he loved everything about computers. He bought all the game machines and PCs that he could lay his hands on. One of his chief interests was computer hardware, especially the application of semiconductor technology and microprocessors. "When I was a postgraduate researcher at university, Intel launched the 4004 and 8080 microprocessors," recalls Kutaragi. "As soon as they came out, I bought the world's first electronic calculator. It cost Y100,000 ($1000) back then! it's a treasured antique now. After I joined Sony, I bought a large-scale integrated circuit (LSI) circuit sample of the Ping-pong game, assembled it, took it to a ski resort, and played with it. in my room by plugging it into a TV. It was good fun."

Even so, his experience with computer games had not prepared him for System G; he had never before seen computer-generated images that moved so freely before his eyes, responding immediately to his commands. He thought it would be great if the technology was used to create a game machine.

Kutaragi had purchased a Famicom for his two-year-old son when it was released in 1983. He had played with it himself and found it great fun. "I tested it from a business perspective. I placed a Sony MSX and a Famicom before my son and observed him, waiting to see which he would choose. He chose the Famicom. He seemed to enjoy playing with it much more than the MSX.  I was truly impressed by the Famicom."

The expression "from a business perspective'' is typical of Kutaragi. He was exploring the business marketability of the systems, and his child's preferences told him that it would be the Famicom, not the MSX, that would become popular with users.

What did he find impressive about the Famicom?

Kutaragi explains, "In those days, the IBM PC displayed just one color: green. It was enjoyable enough playing the Ping-Pong game on that screen, but the Famicom went a step further and was truly revolutionary. Famicom and Sony's MSX created eight-dot images, but the Famicom could produce single-dot images. I thought it was incredible. The software, Donkey Kong and Road Runner, was fun too, but my interest was more in the hardware."

That is why when Kutaragi encountered System G, he thought immediately of how much fun it would be to combine it with the Famicom, and why he resolved to do so.

Who knew?  If you talk to Nintendo fans it almost as if Sony cribbed the whole idea for PS from them. Either trhat or you hear the story about Kutaragi's daughter and not the story of  'System Gazo' developed at Sony.  Yet, as we can see Ken had ideas about game systems when even Nintendo was still starting out in videogames on their first console.  I think this also illustrates how much prior R&D done at Sony motivated what Sony would later make, yet also shows Sony weakness for not full 'understanding' the uses R&D could be used to make.  As we will see later that idea to push forward with the best technology is what made them successful when other companies relied on primitive affordable technologies.

Blogs Created:
5 blogs
Most Commented blog:
Look in the mirror and you'll see you are the XBL problem.
Total Comments on blogs:
109 comments