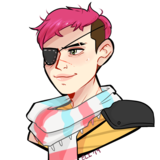 It's me, Moosey! They/them pronouns for anyone wondering.

@bed: Believe you me, nothing would make me happier (and probably more stressed) than if I had the resources at hand to make something on the scale of a Cyberpunk 2077, but still had as complete of creative control as a person (or pair of people, if we were to combine powers) can have over a project of that size.

I'm glad that you appreciated my spending that much time going on about the cops in the game. A thing I probably don't write about as much as I should is things like that, how systems really work and play with each other (or don't) in games, and you can end up with this. Like you said, accidentally being the social commentary that I'd wager the higher ups in the company didn't want the game to have for fear of causing "controversy" or whatever.

Semi related, now that (hopefully) sometime in the near-ish future we'll be out of the cross gen era, and can start getting properly current gen (IE, PS5/Xbox Series) games, I'd really want more games to push deeper and more complex systems, rather than just aiming for prettier graphics. I know you don't need untapped horsepower to make statements with game systems, but it doesn't hurt, either.

@bed: I like liking things too! And yeah, I don't know that much of what Cyberpunk does on its own is particularly unique compared to other games out there, but as a whole, I think it all goes together nicely.

@tartyron: Yeah, this is where I'm at with it too. I totally get how anyone who played the game when it was clearly not properly ready for release, and was going in with that hype was disappointed, or didn't like it. But on its own merits, I liked it a lot!

And yeah, the ads are bad. I get they're probably supposed to obnoxious, but that's such a thin line to walk without them just being bad anyway.

@finaldasa If your PC isn't up to running the game (and I know I certainly can't afford a gaming PC), definitely wait until you've got a PS5 or Series X. I haven't played it on one of the older consoles, but I've watched a lot of Digital Foundry videos, and even on the most recent patches, the game is still clearly too much for the base PS4/Xbox One to handle. But if you do get around to playing it some day, I hope you like it!

@bed: Thank you!!! <3 I try to let my feelings on what I write flow through to the writing, so I'm always glad when it does!

And also thank you for reminding me about Final Jack Fantasy. I have a bunch of other games in my backlog because of subscription services (don't ask), but I do really want to play that eventually. And if I do and write about it, I'll try to make sure every screenshot I post has the word chaos in it.

I remember the one time I got to go to Pax, and meet some of the GB staff. A friend who couldn't attend had asked me to give Vinny a hug for her, and not only did Vinny give me the hug, he smiled, and said, "And here's another hug, just for you."

Gonna miss all three of them, so, so much, but I still wish them the best, wherever they go in life. <3

@slax: Yeah, Haru getting some more screen time was good, and I appreciate all the weird things they add to her. Like how much she talks about chopping wood (I guess to explain her ax skills)??? And her driving!! But also all the serious stuff too.

@cjduke: Yeah, you can definitely just drive her motorcycle around zooming through enemies, haha. Morgana can turn into the van mid fight and do basically the same thing too.

@nodima: You know, when I first started playing the game, I actually tried it on Lethal, haha. It was neat having the enemies die so quickly, but me, right when literally starting the game, a little less so, haha.

Yeah, the Khan was a good villain, certainly not really what I was expecting. Though I didn't really go into the game with any expectations either way about any of the story stuff.

And yeah, the game certainly has a respect for institutions like the samurai, or the feudal lords (for lack of a better term) that based on my (granted rather limited) knowledge of the time, was probably not really deserved. But for as "grounded" as the game is (ie, not fantastical/magical), it still is a fantasy with regard to the "noble samurai," and all that. Which is to say I more or less agree with you, and the fight at the end did feel a bit forced. That's why I let the Uncle live, despite his asking to be killed.

The SotC remake is one I've been itching to play again, but I'm holding off until I can get a PS5. It has a 60 FPS mode that my PS4 Amateur sadly can't make use of.

@bigsocrates: Oh, don't get me wrong, I think the Switch is really great for what it is. In a vacuum, I think the price I paid for it is totally fine, and I've played some great games on it! It's just sometimes I get caught up on worrying about stuff, especially when money is involved. But by and large, I've really enjoyed the Switch and glad I finally got one.

I was going through my Origami King screenshots before posting this blog and that reminded me of the coffee scenes! I had somehow forgotten when writing the text, haha.

Yes, walking uphill, both ways is definitely the intended way to read my blogs! :D