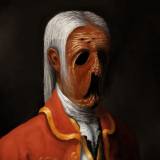 Been gaming since the days of Crystal Caves and Commander Keen.
I'm a great admirer of games that put a good story over random action sequences - I'd rather control an interesting character through a "normal" day than shoot a billion aliens in a game without a plot.
I used to be a Nintendo fanboy from the SNES over the Game Boy to the Nintendo 64 (only buying a PlayStation because all the cool kids had one). I couldn't get into the GameCube, though, so when the PS2 arrived, I switched allegiance, and have been a loyal Sony follower ever since.

Among my favourite games are these: