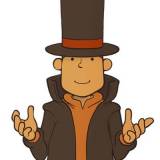 Jack White is also my pick as well. I have an unhealthy obsession with him, and would easily name him as one of, if not my all time favorite musicians. I'm a huge fan of The Raconteurs and The Dead Weather are pretty great too, though I don't expect any will ever top The White Stripes as far as my personal favorite. His solo album was also fantastic I think, and felt like a great departure from what we'd come to expect from him without being so different as to alienate his fans.

All around I just think he's a great artist. I've yet to hear something he's been involved with that I've downright disliked, and that is most certainly something I can't say about almost all my other favorites. Eagerly awaiting the new Dead Weather album this winter!

I could probably go on at infinitum listing things, one that instantly jumps out to me is the ending of Professor Layton and the Unwound Future. Few if any games have made me actually cry, but I can't deny I got pretty choked up over that. I could probably fill an entire list's worth with moments from the Professor Layton games, they just speak to me like little few games do ^__^

I just want to throw back those points at the people making them and apply them to things they love, like donuts.

...yes I did just say donuts were violent, where have you been living?

Studio Ghibli's catalogue should absolutely be one of, if not the first things you watch. My family almost actively dislikes and avoids anime, and yet they all love Studio Ghibli's stuff. I can't actually remember ever meeting someone that didn't either, they are just fantastic all around films and a great place to start for the genre. Specifically I'd recommend Spirited Away and My Neighbor Totoro as my favorites, but pretty much everything they've done is worth watching.

Now I feel I need to rewatch them all for the hundreth time...

I'm still trying to wrap my head around the fact a Gran Turismo movie is actually happening. I mean, can't you just watch racing anytime on Speed?

That said it will probably happen, but at least we can hope that the Top Gear guys ARE involved. I don't give a hoot about cars but they are just awesome and would be reason enough for me to sit through whatever catastrophe Microsoft cooks up in Hollywood ^_^

@randomhero666: You might find this site handy, it lists and has images of all the cards, background, and emoticons for the various trading card supported games ^_^

I believe this is the one you're referring to. It's certainly rather memorable, though I'm not sure I'd like it on my profile...kinda gives off the wrong message...

While I love linux for everyday use and am excited to see where Valve is going to take this, I can't help but feel a Linux based gaming box (presumably what SteamOS is intended for) is not going to do very well in the mass market with how few games currently support linux.

I love indie games as much (probably a lot more) than the next guy, but let's be honest they aren't going to sell a $500 gaming box to the average joe. I think if this is going to succeed Valve needs to double down and get more AAA publishers to jump aboard the linux train. Once we start seeing Activision, SquareEnix, Ubisoft, and other big name publishers and developers, then I think SteamOS and a SteamBox running it will have a chance.

The way I see it now however is simply another cool idea from Valve, but not one that is likely to have the mass appeal they expect. Either way I'm very excited to see what the next two announcements are ^_^

XCOM: EU, courtesy of PS+. Way more addicted to it than I ever expected to be, I'm not generally a big strategy game player, but this game just hits all the right buttons ^_^

I'm a huge huge fan of Steam, and certainly prefer to do as much of my PC gaming through them as possible. Currently my library is at 187, although a lot of them I got from bundles so I haven't actually spent as much ON Steam as most would expect.

As for being comfortable with digital distribution, well I was certainly sceptical at first, but after experiencing the ease of use, great discounts, and convenience of having a game available to buy and play almost instantly, I'm completely on board with it! That said I still buy a lot of stuff on disc, though mainly console and handheld games. PC wise it's digital (and usually Steam) all the way ^_^

As if my backlog wasn't bad enough as is, it's certainly something I'm trying to stop myself from doing as often. I've been trying to limit myself to just stuff I need now or have a very high interest in, and just skipping the stuff I'm partially interested in or that I know I won't play for a long time. I haven't done particularly well at this, but I like to think I'm trying at le-... Ooh, another cheap game!