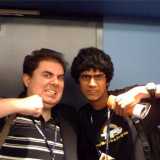 I think it was another one of those movies where I marvel at the skill of the animators the whole time. The way the characters and look and animate is far from realistic, but they're so good at evoking exactly how, for example, excited little kids act when they want to play.

My main complaint about the movie was the main character, i.e. the sister of the heir to the throne. She was based on that "oh gosh I'm just so awkward and quirky" personality way too heavily, in a way that felt like the people who wrote the character were pandering to my high-school self.

That sounded so Bombcast that I was fully expecting to hear "Hey everybody it's TUESDAY" at the end. And I had a reptilian impulse to put giant, deep-dish rims with low-profile tires on something the instant I heard it.

There are probably licensing issues or something preventing them from actually using it, but those of you that are stuck on the idea can just skip the first ~30 seconds of the podcast and listen to this instead.

I don't have a lot of time to play games nowadays (posting this from a biochem class, but I read ahead for it so it's cool guys don't worry my GPA is doing well), but whenever I do dip back into Halo 4, I have a great deal of fun with it.

And that's true of SWAT, too. The instant-gratification, more twitch-based killin' is just as much fun as the large-scale, jetpack-wearing, tank-hijacking, fool-sniping, shotgunning mayhem of the bigger game types, which in turn is just as much fun as the regular-ass 4-on-4 deathmatches. Can you tell I'm a Halo fan yet? I also like Spartan Ops, but ~95% of that is just because I like hearing Jennifer Hale talk. The other 5% is because I'm a sucker for the Halo universe, for no good reason besides the fact that it was the first shooter I got into, probably.

One thing I do miss from my younger days was coordinating with friends to play online. We could do fuckin' WORK when we had a 4-person team all communicating with each other during matches.

Based on how awesome Charlie was in the Persona 4 anime, I think these people can write characters who, in my opinion, are really cool. Then again, I've always been a fan of cool-as-ice, deadpan motherfuckers in pretty much any entertainment media, as well as in real life interpersonal interactions. I'd be friends with Keanu Reeves if I could.

I think what I'm saying is, I don't know if you can do a "cool-as-ice deadpan motherfucker" again and make it work, but based on the anime, I'd like to see them try either that or something entirely new. Because as it stands, like most of the dialog choices you make in Persona 4 result in identical or very similar responses from the surrounding characters, save for the ones during S. Link events that give you "Affection Points" or whatever. Still doesn't feel like I am really giving much character to Charlie, except for the dumb ones like when Teddie bites your hand and you can say "I think I might die" or something.

@EVO: If you do, I'd put even money on you either freaking the fuck out from overstimulation, or flawlessly completing the game in half the time it would take a sober person.

Get back to me on how devoted you are to this anti-objectification-of-women-in-the-video-game-industry effort in 2 weeks, when you're buying some game that prominently features some spandex-clad supermodel-lookin' chick whose lovingly sculpted posterior takes up 40% of the screen space from certain camera angles.

Nah but seriously, if you really give a fuck, go volunteer your time with a feminist organization. I did that for a grand total of 4 hours 2 years ago, and it taught me more about what it means to support feminism than any amount of Internet comments. Get some friends together and protest outside a game company's HQ that's said some wack shit about its female employees. Refuse to buy Mass Effect 2 because of Miranda's "clothing." Do that, if you really give a fuck. I believe in you, and I promise, that's not sarcasm; a lot of your hearts are in the right place, I've seen that from reading some of these comments, believe it or not.

I encourage you to channel your passion on such issues to beyond typing shit on the Internet (even a fantastic video game website like Giant Bomb, with good writers like Patrick who dare to bring this shit up in this community).

That is, if you really give a fuck. Else, forget about it like most everyone else will, and shut the fuck up, like I'm about to.

Now I don't mean to tick anyone off here, so don't get me wrong, but I am wondering why people bother so much with talking about this kind of thing rather than just going out there and doing it, until it becomes the norm? Just go out there and treat everyone equally, until the kids start seeing it's the cool thing to do! Those sexist old people will be dead soon enough, and our more progressive generation will replace their problems with our own fresh new ones.

Debates are important in many cases, to be sure. But I mean, how much more can really be elucidated about equal rights by arguing about it now? We're pretty much all aware that every human deserves to be treated equally, so... this bloody torso thing, what do we learn from it, besides highlighting that yes, weird marketing targeted at weirdos still exists? If you want to "move gamer culture forward" or whatever, just don't be one of those weirdos! Lead by example. Become the CEO of a game company, and decide on equal salaries and whatnot. Don't come here and just talk and talk and talk.

I know you Internet folks get a good norepinephrine kick out of a good argument, when your heart is beating quick and you're typin' real fast and hard and whatnot because that fucker is just plain WRONG. Know what else has a good NE kick? Amphetamine. Both activities are habit-forming, and a mentally engaging way to waste your time. You're addicted to Internet arguments. Get help.

... So you can probably tell from my tone that I don't think there's much to be learned, but I'm open to changing my mind on the matter, if somebody says something that makes sense to me. As it stands, I'm gonna head to virology class and sit next to Jessica and Colin, both of whom I make good-natured fun of for wearing those brightly colored jeans that kids seem to be so fond of these days. Ah fuck now I'm late. Well that's my fault.

@Karkarov: Precisely! The offense isn't in the word itself, it's in the person listening. And there are some words that will elicit a negative reaction in many, many people. Those are the ones I avoid!

As for he lady who tried to get you fired... yeah, it happens. My dad was once told off by some lady for offering to help her get like, a big box or some appliance out of her pickup truck or something. Kinda ridiculous, because he's the kind of guy who would have offered to help even if it was a burly man trying to move something bulky, but they didn't know that, and perceived it as sexism. That is kinda not the point of this particular post, but when it comes to things like that, my standpoint is "fuck it, man, I was just trying to be nice. Ain't no law against it." Also, it serves as a pretty good friendship test, as in "are you the kind of person that would get upset when I greet you using the word 'ma'am'? Yes? Well then it's probably best if we don't try to cultivate a friendship with each other. Good day!"

@Cianyx: That is a very intelligent, very succinct way of answering the accusation that I was trying to tell people how to use their words with my original post. It's an actual argument, for one; I just basically said "hey y'all, just throwing this out there. Tell me what you think."