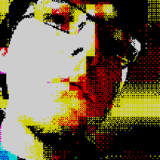 Oh man, you're totally right! Thanks so much for solving this, I thought I was going crazy! :D

Hey guys. I remember Jeff playing this on a show a while back. I think it was on a UPF, but I could be mistaken. I remember Jeff getting excited by the Golden Harvest parody intro, and then being kind of disappointed by the game. I can't seem to find it anywhere!

If anyone can remember when and where this was played, that'd be awesome to know! Thanks xoxo :)

You guys should return to the AGE OF BARBARIAN.

It's a selfish one for me, but the Worth Playing he did featuring my silly Ninja game and my Ryan Davis tribute game for sure (thanks whoever linked it above already! :D). Seeing that up there on the front page, seeing everyone enjoy the game for what it was, and how it effected Patrick was a really moving moment for me and I was so glad to give a little something back to this site/community for being so awesome. Patrick helped me do to that and that means the world to me.

Oh and anything with him and Ryan - Jurassic Lark was fantastic. And as a duder with some anxiety issues, Spookin' was a great series for me to enjoy horror games at arms length!

Any word on this problem yet? I know I've been dealing with it for a number of months too - along with a good few others when you look at the intermittent threads that keep popping up about this. Honestly it's getting pretty frustrating having to rely on the Youtube videos (adverts and all) for dependable playback, or just crossing my fingers and hoping when it comes to subscriber content. I love to go back and watch/listen to old premium features while I work, and they fairly (maybe 8 out of 10 times if I was guessing) consistently just drop and act like they've finished part way through.

I know you guys are busy, and are doing an absolutely stellar job with the content as of late, but I hope this can get looked into at some point! :)

Yeah same here - Windows 7 and Chrome - no problems with my internet or streaming/downloading from any other site, just here. Having to stream everything from youtube or watch in low quality progressive and hope for the best. But even now I'm trying to watch the old 12 hour Morrowind marathon and it's gotten 2 minutes in (on low/progressive even) and just died. This has been going on for weeks for me now, and really bumming me out. No problems with live shows or anything like that, purely the player is just unusable for me right now. It feels like I'm back on dial-up! XD

Thanks everyone, so much. I've been overwhelmed by the response this little game has received, and so lucky to be involved in a community like this. Yesterday was a surreal day for me to be sure, but I am glad it all happened. It really shows how close this website has made us all, and how much we all miss Ryan..

I think I'll do a little update to the game at some point in the future, hopefully just to make Alexis and Rorie more visible. Those are the two duders that people are having the most trouble with, and I felt so bad watching UPF when Alexis said 'you guys are all in it', not realising he was in it, too!

But that won't be for a few days. I need a little distance from the game for a bit as it was kind of emotionally draining to work on.

I’ve been bouncing around a thought like this for a while, but only after recently re-watching the Game Room Quick Looks while working on another game did I have the idea.

I wanted to make a Giant Bomb game. Specifically, I wanted to make a tribute to Ryan Davis as a way of saying ‘thanks’ to him, to the other guys, and to the community who inspired me with all the wonderful things they make to show their love for the website. I’m not the most active member of the community, but it’s always entertaining and heart warming, while Jeff, Vinny and the guys have helped me through some rough stuff, and kept me sane on those long, quiet nights of game making/drawing/eating ice cream. I’d already had a particularly terrible year leading up to Ryan’s passing and, like for many of you, that hurt me a lot more than I thought the passing of a ‘stranger’ ever could.

So yeah! I made a game! If you cast your mind back to the Game Room Quick Look where they took a look at Keystone Kapers, the entire genesis of the project came from there. So to be reductive, the game is a Keystone Kapers clone. But! I’ve sprinkled it with a bunch of Giant Bomb jokes & tributes young and old - from Ghost Fish to Famicom Tapes, Space Neon Lobsters to Ryan’s um, ‘interest’ in cake that he divulged during the GDC 2013 After Hours show.

A box has shown up in the mail and everyone’s gathered to film a mailbag, but they’re waiting on Ryan. He needs to run & jump his way to the top to meet with the others and find out what’s in the package. The game loops like all the best Atari games did, while getting progressively harder. And again, like Atari games, you’ve seen pretty much everything by screen 4 or 5. After that it’s all about score! :)

I’d shown it to Patrick earlier this week as I was wondering how/when to release it, and if it’d be a weird conflict of interests or something if I put it out. When Patrick offered to ‘debut’ it on Worth Playing I was, of course, over the moon! So here we are with my silly little Giant Bomb game. Unfortunately it’s currently only available for Windows. Sorry Gaben. :(

If you want download it and give it a go - please do! And thanks to you, thanks to the guys at Giant Bomb, and fuck thanks Ryan Davis. I miss him.

Edited mine to address some issues. Lightened the bomb to make the texture come through, removed the corner tears because they looked bootsy, and generally tweaked it. Continued to wrestle with the age old question "Should Bomb Have A Face?" but just couldn't get it to work in this style.

I love it! Great expression of character. Maybe the background could be flashed up a little? Nothing complicated, just... I dunno. Love it, though!

@conmused: Haha, thanks for the advice. I think that'll work with the bomb. Not sure about the text though. I mean, I agree with you, but on the original Activision boxes I'm apeing they didn't outline them. So it'd look better, but it'd be non-canonical or something!

I personally think your entry is way better anyway. XD

Thanks duder. When I'm happy that the design is finished, I'll see about making some wallpaperables.