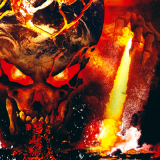 I'm part of the problem, and I'm okay with that.

The last Call Of Duty title I played with any amount of reverence and adoration was Call Of Duty 4: Modern Warfare. I speak of that in terms of both the single player and the multiplayer experiences. I never Prestige'd the original Modern Warfare. I bought Call Of Duty: Black Ops II on Friday. I Prestige'd the following Sunday. I'm less than ten levels away from hitting Prestige number two. I'm not apologizing. Most of you who know me, know that I don't make excuses or apologize for what I do, the experiences I have or the types of games I like. I like what I like, and I don't try to fit my opinion in with any singular opinion or views. If my opinion happens to fall into the general consensus, then so be it.

It had been awhile since I've been into a multiplayer game, and I wanted to jump into one. I recently got an awesome new gig, and so I had (and have) some funds to spend. I like what I saw in Black Ops II, so decided to purchase it and dive in. There's something about the gameplay loop that I find compelling. I find it to be legitimately so, the complete opposite of empty calories. It works my fingers, the puzzle-solving part of my brain and my reaction speeds. Most people would consider this to simply be twitch.

But I think there is some legitimacy to this type of multiplayer shooter. It's still a gold mine. No game has really been able to match or copy the Call Of Duty experience. Sure, there are other, more tactical multiplayer experiences, (Battlefield 3, Gears Of War 3, various PC shooters), but those experiences are going for something different. There's something satisfying about seeing who can formulate a plan of attack in a split second and have it pay off for them. I'm all ears, and every part of my senses and motor functions with a controller are working at one-hundred percent during a multiplayer game. If I'm not shooting, I'm looking for the next kill. If I'm not looking for the next kill, I'm looking to how I can gain an advantage. If I'm not gaining an advantage, then I'm combing my loadouts to see what went wrong and how I can fix it. It's puzzle solving. The end game is pull left and then right trigger and, "shoot that guy in the face," but there are steps needed to get to that point where that's a viable tactic.

I know it's easy to dismiss something simply because of it's popularity, the community, or even for personal reasons which are still valid as all of those reasons are, because it comes with the territory for this series as I've unfortunately found as well. Playing the Black Ops II multiplayer as much as I have been has forced me to sit down and do some thinking about the games and the types of experiences I enjoy, which leads me to where I am right now. I have no parting question, or higher philosophical observation about the state of videogames, or whatever, so I just wanted to get my feelings out and maybe get some conversation going.

Blogs Created:
1 blog
Most Commented blog:
I'm part of the problem, and I'm okay with that.
Total Comments on blogs:
43 comments