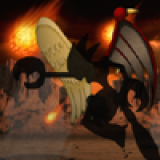 God damn, thinking back to when I heard about it (a friend spoil it through tweet) I was just in shocked and thinking "well, something super serious between Trevor and Johnny must have happen" only to have in the first cutscene with Trevor kills off a weak Johnny without much effort. I remember thinking to myself "What are you doing? Why are you looking down? Why aren't you decking him? Whats going on?"

I think Rockstar did an amazing job introducing Trevor by doing something like that, it sorta reinforces my idea that of "no protagonists in the GTA universe is invincible" in which these main characters not always go with the 'happily ever after' life we hope they have (lets face it, Niko probably doesn't have the brightest future with either ending from IV [I just read the wiki and I can't remember Kate if my life depended upon it.])

I do wish we can see something like "The Fall of The Lost" DLC or something, explaining how Johnny and them ended up in LS and what caused Johnny to crack. Just a way to let us know first hand how everything came to be and give us some idea how it all happen.

If they were go go this far I demand a Quick Look at Sexy Beach Zero next. I'd love to see their reaction when they see all of the "options" at their disposal. HAHAHAHA.

There's a game called "Battle Raper". I no longer know anything.

I knew about this game before and that makes me sad.

Well, at least you didn't write out the wiki for it. Props to Megafat for doing the job no one wanted to do.

Am I the only one in this thread that let Ben die? I felt better about it after he gave me the "ok" too. So in my play through, it would be:

and then whoever else that seems of importance. I doubt Molly goes on the boat but she will probably play an important part of the final episode. Maybe Clems mom/dad/uncle? I don't know, but the way I have been playing Lee is that he is going to leave himself behind for the greater good of the group.

Left Lilly - because I tried saving her father and I liked Carley.

Loved the episode even though the shooting part was shit (both of them) and dragged a bit when the new characters were introduced. They haven't given me enough reason to care about Chuck, even though theres not much to say or talk to about him at this point. The new couple dialog choices weren't that great either. It's strange to think about how this would play out if you were "all Kenny" choices guy.

Also something I was wondering:

Does anyone else think Clementine's hoodie, haircut, and beginners gun skill will play in later?

Will the choices you've made in front of Clementine impact you later (i.e. saving killing Andy and Dandy in front of her.)

Will Kenny leave everyone behind or save them through his own sacrifice?

Do you think theres enough time for them to make us care about more characters (including Chuck and them?) (Besides Clementine's parents and "Uncle" [I think thats what I heard] since we are going to be dealing with them shortly)

Here is a demo of something I wrote awhile back for a band I was trying to start. I wrote the music using Guitar Pro 5 and decided to export the midi and convert it to WAVE. I forgot the scale I was using when I was writing everything out (I wrote this like October 2011) and its in half step tuning.

So what does GB think? Good, bad, meh?