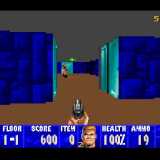 It's actually next weekend; starts Aug 24. Not sure if your situation will change by then, but good luck regardless.

Really though, I don't think C/++ is the best environment for prototyping. You really want something that stays concise and flexible, unless you have an extreme amount of familiarity with the languages.

XNA, flash, etc are much faster to build and iterate with. You (probably) aren't going to do anything in 48h that will give you a tangible benefit from C/++. Unless you just want to become more familiar with C/++..

All I've seen from what you've wrote is less a wise and learned view of things and more a narrow shrugging off of new things that you won't give another second's glance. Here's a fact: Video games are alive and kicking; they're more varied than ever before and there are more avenues for talent to shine than ever before. Do good genres die? Not really. You see the same things in music and movies; musicals seemed to be dead for quite a while but they have existed for a fairly long time in some form or another and still do. Do good games always exist in the form that you remember them? Not exactly, no; they change and grow. If you don't like it, that's fine, but you're losing out on so many wondrous games by simply writing things off if they aren't AAA. No skin off my back.

This is patently false, and obviously so. The genre collapse in the AAA space is a real and trivially evident phenomena.

2d games are essentially dead. The ones that do come out generally fail to match up to games released a decade ago (perhaps a reason few are released..).

Space Sims are essentially dead. The only one I can even name in the past several years is the continuation of the X series.

Flight Sims have a similar situation to Space Sims.

Arena FPS died with the migration to consoles.

These are the styles of games that led the industry through the 90s. If you can tell me where I can find replacements for the following gems, please tell me:

There are several examples of indie games that fill some of those gaps, but there are others that are completely void. Notably arena FPS and Space Sims.

you can literally just mash A and get through story mode. It is not difficult.

Only 10% of players finish games. Maybe games shouldn't have endings because most of the people that play wont see them anyway.

I only ever got the fist game; there were no boosters- no real deck customization at all. The later versions might have added some /minor/ customization, but WOTC will probably never give you a standalone single-player deckbuilder sandbox again (oh, how I loved the Microprose game). Anything like boosters or full deck customization would directly hit their massive profits from Magic Online.

I'm not at the true ending of this game yet (I've only cleared Yukiko and Teddie), but it looks like it won't spoil P3 at all. P4 is more or less completely spoiled though.

The P3 characters seem more like fan service and something to round out the cast of fighters.

Although if it leads to this, then maybe less Boo.

Or just give me a Vita emulator. I pay for my software, but choose my hardware carefully, and I was never persuaded to bite on the Vita hardware.

The system is actually fairly nice; PSP games look/play great on it. The few games I've bothered to pick up for the native system (mostly Lumines) are also pretty good.

The only thing it's missing is software. That said, I'm not sure I like the likely ramifications of this; even if I do love me some GBA games.

@LiquidPrince: One way you can pull of the shoryuken motion is to press forward, then the fireball motion. Something like; forward, down, down forward, forward.

Please don't do this. It's a bad habit and will prevent you from getting better quickly.

Inputs should be entered with intent, and practiced as such. If you use extraneous inputs, your execution speed will suffer. Additionally, if you mash out all of your buttons, you won't be sure that you can reproduce your combos.

@LiquidPrince - forward, down, down-forward. On some systems, there are shortcuts -- I try to avoid them and maintain clean execution unless a combo requires difficult timing and the shortcut is faster/more convenient. If you're new to sticks, you might want to try out a few different methods of holding the ball-top. In my experience, however you go about it naïvely is fine though. For me, the motion is accomplished by pressing forward with two fingers, down with those fingers, then forward with my shoulder. In reverse, it's back with thumb, down with two fingers, back with shoulder.

If you want to play Baldur's Gate, wait for the enhanced edition to come out. The iPad version looks great and it has cross-play with the desktop versions.

If you want to play a game like it, Neverwinter is best for multiplayer (not NWN2) and is greatly enhanced by mods. For single player, I would get Icewind Dale.

The D&D systems don't matter terribly much, as most of the interaction is handled for you. In games under 2e systems, lower armor class is better.