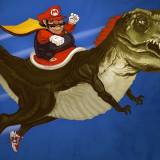 It's the 20th Anniversary of Pokemon! Hooray!

I've taken the opportunity to play a bit of Pokemon Yellow on the 3DS Virtual Console and this game has given me a brand new appreciation for every later game in the series. Red, Blue, and Yellow are rough. And not in a "diamond in the rough, just polish it up" kind of way, but in a "holy shit what how" way. There are so many baffling design decisions, that it's a wonder how this game became a worldwide phenomenon. It's even more fascinating how R/B/Y holds such a nostalgic place in my heart despite all of its flaws.

For instance: Psychic Pokemon are completely overpowered and unbalanced. Ghost types that were supposed to counteract Psychics were instead completely ineffective. Bug type attacks were super effective, but the vast majority of the Pokemon that could learn Bug moves were part Poison. Which Psychic was super effective against. The most effective Psychic-killer wasn't a Gengar or a Butterfree, but instead a Jolteon who could learn Pin Needle (and half the time, you should just have Jolteon use Thunderbolt to do more damage). That said, you could always use Electrode with Explosion to try and take them out.

The statistics governing the Pokemon are extremely unbalanced. Generation 1 has five stats: HP, Attack, Defense, Special, and Speed. Most are self-explanatory (HP is how much health, Attack and Defense are for physical attacks, Speed is how fast you are) but Special is what is the most interesting stat here. Special determines both how much damage you deal with Special Attacks and how much damage you take from Special attacks. Pokemon with high Specials were naturally more useful than Pokemon with low Specials as they dealt more damage and took less damage in return. And to top it all off, Psychic attacks all relied on the Special stat. In Generation 1, if an attack was Physical or Special was determined by the type of the move, not necessarily the move itself. For instance, all Grass moves were Special and all Fighting moves were Physical. It wasn't until Generation 4, some ten years later, where the moves were physical or special depending on move itself.

Adding to the frustration are weird quirks almost designed to drive the player insane. Being put to sleep is practically a death sentence, because waking up from sleep takes up your turn. Moves meant to double your critical hit chance actually cut it by three-quarters. Every single move in the game (except for one) has a 1/256 of missing because of how the game is programmed. Binding moves trapped your Pokemon, making you unable to attack or switch out. If the Pokemon binding you is faster, then the only thing you can really do is hope. And if you're hoping to use a One-Hit Knock Out move, then you need to be faster, since those are all based off of Speed. Slower than your opponent? Then that Horn Drill ain't hitting. Ever.

Speaking of Speed, it is responsible for its own brand of game breaking hilarity. Look no further than the lovely Pokemon to your right, Tauros. Critical hit chances are dictated solely by Speed, specifically Base Speed/512. Tauros, with 110 Base Speed will critical hit over 20% of the time. Add into that a move which will paralyze your opponent 30% of the time, and it's almost no wonder why there have been so many balance changes to the formula over the years. Fun fact: The Critical Hit formula in Generation 1 is also a little messed up: It ignores all user and opponent stats, so if you boosted up your Attack, the critical hit could actually do less damage. Go figure.

And the culmination of all these weird design decisions and flaws is Mewtwo, who holds the distinction of being the single most powerful Pokemon to ever exist in the game ever. No other legendary Pokemon has come close to the sheer destructive power that Mewtwo holds, as it is able to completely obliterate your team with a thought, all while healing back any damage you might have been able to inflict upon it. Capturing Mewtwo without the Master Ball is fool's errand, and defeating the level 100 Mewtwo in Pokemon Stadium is a momentous task requiring more than a little luck. And Electrode Explosions. Mewtwo is so powerful because of all of the issues R/B/Y has and barring some unforeseen circumstance, there will never be an equal contender to its throne.

All of these negatives don't sway my memory, however. R/B/Y holds a special place in my heart because it's the first game I can clearly recall that let me wreck unintentional havoc on the game's intended design. Buggy to a fault, R/B/Y inadvertently unlocked the part of my brain that enjoys breaking things down to understand how they work. This is best seen by the myriad of glitches and bugs ranging from as simple as fishing on the statues in each Pokemon gym to giving yourself 128 Master Balls by talking to an Old Man, flying to Cinnabar Island, fighting the glitch Pokemon MissingNo., and then shuffling some items in your bag. Or you could teleport away from a trainer fight, fight another specific trainer, and then wander around until you encounter a Level 7 Mew. Seriously. No, seriously. R/B/Y made me feel like anything could happen and all of the kids at school would share what cool thing came up. Arguing if Mew was real, seeing what kinds of glitches we could create, and just outright breaking the game was a fantastic time in my young mind.

R/B/Y are rough. I have no doubt about that. But there's something interesting hidden under all the jank, teeming under the surface, waiting to be let out. Later games would come in and fix many of the issues, adding in new ways to combat the Psychics and having damage formulas that made sense. These later games would expand the world, add new Pokemon, give the player more tools and more options to enjoy the game the designers built to enjoy. But maybe part of the enjoyment for R/B/Y came from the unintentional aspects of the design. I think my nostalgia is from breaking the already broken game and "pulling one over" on the designers. And I think that's partially why I enjoy games to this day - I love exploring the mechanics of games to get at how they work, and then exploiting them to the greatest effect. When I'm breaking a game, I'm having the most amount of fun I personally can have. At least, that's what my two Level 100 Mews tell me.

I do not own a next generation system. Or a current generation system. Whatever you want to call the Xbox One and PS4 in the year 2015, I do not happen to own either. I've tasked myself with trying to play through as many of over 600 games I happen to have in my collection. Maybe I'll play through them all to completion (hahahahah no), but what's more likely is that I will try to extract exactly what I want from each one before saying to myself, "Yeah. Yeah I think I'm good." With that in mind, here are some of the games I've been playing and my thoughts on each.

Dragon Quest is a series that has always been near and dear to my heart. From the early beginnings on the NES wandering Assaram in Dragon Quest III to exploring the wilderness of Dragon Quest VIII on the PS2, I've never strayed too far from my love of DQ. Therefore it's somewhat surprising that I completely glossed over Dragon Quest IX when it was originally released. It was released in the middle of my college days, when the Nintendo DS was my primary system for gaming and I even remember picking it up a year or two later from a GameStop bargain bin, never taking the time to actually fire it up and enjoy its wonderful charms. I suppose I thought I couldn't be bothered with a more multiplayer-focused DQ game.

How wrong and foolish I was. While the WiFi enabled shop and special quests are infuriatingly locked away, playing DQIX after the fact makes me realize just how much of a powerhouse this game truly was. Epic, sprawling, randomized grottos that you can share with your friends? Fantastic. Fighting all of the old bosses from the first eight Dragon Quest games? Awesome. A huge class changing system that allows you to make your characters ridiculous powerful, and an extremely powerful character customizer that allows you to recreate all the protagonists from Dragon Quest? Fucking sweet. Dragon Quest IX absolutely rocks and I kick my old self for not giving it a fair shake in its day. So far I've put in about 25 hours and I don't see myself stopping anytime soon.

Asura's Wrath might be one of the greatest anime power fantasies I've ever had the pleasure of playing. The beat-em-up gameplay was lackluster, but what it allowed you to do and see was far beyond my greatest imagination. Asura embodies the shonen protagonist who never gives up, but in a much more mature (and infinitely angrier) way. The story was also surprisingly gripping, leading me to care intensely about the outcome of Asura's wrath.

I'm not sorry for that pun.

In short, it was great. I absolutely adored it. Though of course I bought a physical disc a week before it went on sale for half that price. Of course.