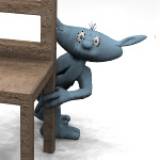 Not thrilled with the new site. The layout is nice enough but nothing seems to work. Can't update lists, profile details... new thinner page layout means image arrangement of wiki pages is largely destroyed. Kinda done with it to be honest. It was fun writing some pages and adding a few screens, but this has pretty much sapped my enthusiasm for the whole thing. Don't think I'll be back.

The Good, The Bad, and the BRAAAAINS

So I honestly don't like zombies very much. I will tolerate zombies, and sometimes enjoy games despite them having zombies, such as Half Life and yes, even Left 4 Dead. Played it initially mostly out of professional interest - Valve's developers commentary makes very interesting listening and the AI director is rather fascinating - but eventually had to admit it's actually a really good game, and despite not being much for brain-eaters, I was enjoying it.

However, when people just add zombies as a kind of nerd-shorthand for fun (with ninjas, pirates and robots being the alternative) to a game that has a great identity of its own which has nothing to do with the undead... when you add zombies to a spaghetti western... it just ruins it. It's like the developers don't even respect their own game enough to maintain its artistic integrity.

Somehow I am reminded of this.

Red Dead is not a game that needed zombies.

I kind of miss really sinking my teeth into a game. These days I rarely spend more than a few hours a week on a game, if that. There's just too many different  ones I want to try and if I finish a game at all it's over the course of months rather than weeks if it's anywhere over 5-10 hours...

On the upside, being spoilt for choice makes it easier to pass on games that would otherwise be enjoyable, but whose publisher I do not wish to support with my money.... which is to say, Starcraft 2. If I get it at all, it'll be used.

So right now I'm playing through Vampire Bloodlines again, taking some screenshots along the way, and adding some character and concept pages to the wiki where they're missing. I'd been meaning to get back to this world of darkness again some time so this was a perfectly good excuse. First time I played as a Tremere blood mage which was interesting, but by far the most fun was playing as a Malkavian the second time. Really turns the game on its head and creates some genuinely hilarious moments (STOP-sign!). The way people react to you and the random stuff you can say really adds to the entertainment.

Right now I'm trying out the Gangrel clan. I briefly went with Ventrue just to see what that did but decided it was too similar to stuff I'd done before and I was more curious about the beast transformations and what have you of aforementioned Gangrel clan. I've gotten to Downtown LA now and I might give it a break and continue playing some other stuff first, but I'll be getting back to this...

So I'm quite liking this brave new site... the wiki is highly awesome and has the potential to become the de facto encyclopedia for all things gaming. Couple of things I'm not getting yet: Not sure why I can't put spaces in my name, or more precisely I wish there was a separate display name from the one word usernames... and I'm wondering where to button for "Create list" is...

Blogs Created:
5 blogs
Most Commented blog:
The Good, The Bad, and the BRAAAAINS
Total Comments on blogs:
15 comments