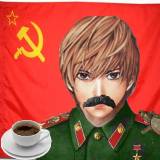 An Analysis of Teddie.

Maybe this has been mentioned before but I was just thinking about Teddie and I want to share some of my thoughts i've had since playing Persona 4 and briefly analyze Teddie as character.

I believe that Teddie is a satire of the mascot character. You may know the kind of character I'm talking about. At the start of the game teddie is literally a mascot ( on a meta level as Persona 4's mascot but he is also, you know... a living bear suit, not an actual bear, he has a zipper and everything)

He is empty inside and doesn't have much of a personality to begin with other than being happy while giving you things to advance the plot. In terms of a character he is much like Snarf, slime, the moogles, and so many other cutesy but kind of annoying mascots: he lacks any real personality, living as a very flat character. He serves as a way to attract a wider audience/ be marketable. LIKE THESE GUYS!

But the lack of character is something Teddie is aware of. Despite appearing to be the happy plot progression device he is alone and sad. Like many other mascot characters he is surrounded by young teenage protagonists that are strong willed and have a purpose. Teddie is different. he chirps at you that Yosuke has been charmed, big whoop. While everyone else has something else inside them that makes them special, their personas (hey a double entrendre) Teddie is empty, he has no persona. Even the "cute" quirks that Teddie has are ridiculed by the rest of the team; he makes jokes, but everyone just finds them corny and lame.

The emptiness mixed with the feeling that he is nothing but a cute manufactured cheerleader at the sidelines for the heroes catches up to Teddie. He undergoes an existential crisis, defeats his shadow, and is rewarded with a persona, his inner self. The next time you see Teddie he isn't empty, he is now an incredibly handsom but somewhat generic pretty anime dude.

He is capable of being an awesome party member being a good replacement for either Yukiko or Chie. He fits in with the group a bit better joining them in the more leisurely activities like the festivals and parties. Teddie gets closer to you, Nanako and the rest of the team, he finally has some purpose for existing and can be a real help. What was once a shallow and meaningless mascot is now a person and full member of the team. He actually becomes a bit of a playboy and somewhat genuinely funny and charming. Teddie evolves as a character and also as a person/ entity.

These were just some things I've been pondering and felt like getting out there. I've always liked Teddie as a character and thought he was interesting because I saw him as a commentary on a certain type of character that is common in all types of media but especially anime and JRPGs.