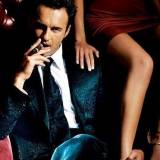 hit a bag in a turn, tried to recover, went onto the gravel and slammed into the guardrail. tried to get up and my leg was hanging

had full leather on, saved my ass big time

I hate my job.

My job is so fucking unbelievable. I'll attempt summing it up by describing the people I work with:

First off, there's this wannabe, thinks-she's-a-supermodel kind of girl. I will admit, she's decently hot, but God damn, she's completely useless. She's constantly fixing her make up or hair. She's incredibly self-centered and she never considers the needs of someone else. On top of that she's dumb as a God damn brick, and every time I see her I'm amazed at how she has the brainpower to to breathe.

Girl number two is the complete opposite. I think she's one of the smartest people on the planet. But of course, she's here with us even though she literally has endless job opportunities. On the 1-10 scale, she's a solid 1. I doubt she showers very often or takes very good care of her lady-parts. I think she might even be lesbian, because she moans like a damn cat in heat every time we drive by a hardware store.

But the jewel of the fucking crown has got to be the fucking stoner. But this guy isn't your regular, run-of-the-mill stoner. He's the fucking top pothead, the tophead. He's high as a kite, baked out of his gourds, before he even comes to work, during work, and I'm sure even after work. I doubt he's been sober more than an hour for the past 10 years, and he's only 22. He dresses like one of those stupid beatniks from the 60's. To top it all off, he brings his big, huge fucking dog to work. Every single fucking day I have to see, hear and smell this enormous, slobbering Great Dane walk around half-stoned from all the second-hand smoke. Sometimes I think it's even trying to talk to us with it's constant bellowing. And both him and the pothead are ALWAYS hungry, forcing us to stop multiple times a day at fucking McDonalds and Burger King.

Anyway, I drive these fucktards around and we go on adventures and solve mysteries and stuff together.

How I met the dumbest girl in the world

It's Friday night, and I'm chillin' like a villain at my bro's house. He has this girl over. She's sitting in the couch. Browsing Facebook (what else?). Suddenly, she starts freaking out. And I mean legit freaking out. She screams "oh my god" at least 20 times. Turns out she had found a Facebook profile with her name and all of her pictures on it with a bunch of people as friends she didn't know. My bro tries to calm her down, but it's no use.

Now, I wasn't expecting much from this airhead the first time I saw her. But what she did next, man, I can not wrap my mind around how dumb it was. She calls 911.
Yep, she calls 911 over a Facebook account.
The operator gets mad at her, a cruiser is sent over and she gets a fine of about $300.
And that's how I met the dumbest girl in the world.
121 Comments

Blogs Created:
3 blogs
Most Commented blog:
How I met the dumbest girl in the world
Total Comments on blogs:
217 comments