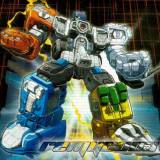 Also as I side note, I once helped a customer in there when I no longer worked there because I knew more than the staff serving her. He just walked off and left me to it...

GAME's retail experience depends solely on the staff in the store. I used to work for them in Leeds, UK and to be fair, our store was pretty kick ass when I was there. I ended up walking out cause the assistant manager basically said I was shit at my job when I was the only one who could define genre's, reguarlarly read gaming magazines (they were free to staff but not the point) and played games almost everyday, as well as being the only person in the store to have all the consoles. GAME's fate had been sealed while I worked there because we had a couple of the directors come to the store, so the area manager told us to tidy up and get everything spick and span, which is fair enough. I did disagree, however, when we started moving the entire store around (gameboy advance (yes it was THAT era) to back of store, swapping where Xbox and PS2 sections were etc) in about four days because, and I quote "The directors like it to be this way". We were second on the region in terms of sales and performance, we didnt need to change it, the company just pander to managers all the time. It especially pissed me off when the directors spend exactly 5 minutes in the store, then left, didnt even talk to the staff. When the guys running the company dont give a fuck about the people that are actually making them money, or how the store even really looks, what hope did GAME have?

@Jethuty Your right he is, but he is also saying that his comments are deeply engrained into the fighting game scene, which is hard enough to break into without being alienated by that level assholery. IF the community does consider those types of comments and behaviour acceptable, it is not a community I want to be apart of. To be fair, I never will be as I simply do not have the time or reactions to make it to that level of fighting game play, and I am not labelling the entire community as sexist, racist assholes since I know a lot of them will be great people who talk a bit of smack. This guy isnt doing that and is bringing the entire community down and alienating people from joining when, especially as a spokesperson for the genre, he should be showing what a great community it is, even if it does get a little heated.

apart from lack of skill, this makes me NOT want to play fighting games and be part of that community...

I just want good games, be they console style (uncharted) or pick up and play for 5 min (Lumines). I would really like Sony to start up a proper old game service like Good Old Games for old PC ports and the like, but I also realise I have more chance of getting a wank from the pope. I also hope all of the compliants about the dashboard and settings are listened to and firmware updates sort it all out. I think they have a real opportunity to pull a Microsoft and keep the system level looking fresh for years...

Apparently it will as a 'previously on mass effect' kinda deal in case people didnt play 1 and 2...

Legs for me with some caveats...

and it is a great game, however, Mario's rescuing of Princess Peach is somewhat diminished by being half her size if he is mini Mario and you suck at the game like I do! lol thoughts?

interesting addition, didnt even think you would be allowed to use dropbox on the console...