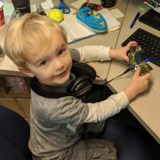 As an original contributor to that guide I'm sad it's gone. Would love the Midnight Brown catalogue on Spotify.

Not Nowhere Near (a good) Xbox Experience

That's a double negative, so its good?

@SexyToad: I wish I could've ported it over or even used it as a lead platform but to make stuff for iOS you need a mac which is out of my price range now. I know you can do it in a virtual machine I just haven't had time to set all that up. HOPEFULLY our next game will show up on the app store, we really do want to branch out.

@mandude I was gonna say check the tutorials. Thanks man hearing people like my game makes all the time worth it, glad to hear your enjoying so far hope you like it all!

@D_Bones You know I love you David <3

So it's been about 5 months but I finally put my first android game on the market. Its called Reverse Gravity, a free physics based puzzle game which works on every android phone I've tested it on. It was definitelyt a long 5 months but after a crunch week I had it ready to show off at a thing my school was having, that didn't generate a lot of traffic but it was nice to have a more imminent goal so we didn't just keep working on it forever, even though I'm sure we could've; I don't think it would've ever been perfect.

Basically the game is this: Your ball starts off a level in the corner of the level and there are various gems on the screen, you win the level by collecting all the gems. You can draw lines on the screen for your ball to ride and can also reverse the gravity of the world by tapping the screen. The goal is to complete the level, reversing gravity as little as possible. Completing the levels enough to unlock the next one but you are awarded a rank from D to S (everyone loves S-Ranks). Some of the gems are coloured, and to collect a gem you have to be the same colour as it. You're ball is white and there can up to 3 colour switches on the screen at a time (primary colours) and rolling into one changes you to that colour. Sometimes you'll also have to mix colours, os if there's a green gem you'd have to hit blue and yellow to turn green then collect it. There's 36 levels right now and we do intend to do an update after schools done to add a bunch more.

Me and my buddy Tony coded the game and the art done half done by me and my girlfriend Jazeen. For those interested in code specifics it was written in java as are all android apps and for the engine we used and Engine. I looked at a lot of free android engines I thought this was the best one, it uses box2D for its physics engine and its also using the native C++ version and not the slower java port (which is mainly why we chose it). It's also pretty simple to use I imagine even if you have fairly little programming knowledge it would be a great place to start any android game.

Tony and I are in school for game programming at Humber, so we've made smaller games before but their more like demos, we've never made a full, market worthy game before.One of the hardest parts was sticking to an idea, because we just had so many with every little thing,everthing kept changing which is one reason it took so long; I bet we could've done it in something like 3 months. Art was also hard to decide on, we probably went through about 3 different themes before we eventually stuck to what we have now, its kinda a mix of a couple of them anyways. Art is one of those things that trip you up because its hard as shit to figure things like how cool a menu looks and all this other stuff and keep it one theme,finding a good artist is definitely key. Media in general is hard because sound was a bitch too. Thankfully I knew adobes products before I started so I knew photoshop and soundbooth (although I hear theres a better one then soundbooth). For the sound effects I used a sweet program called project sfxr, its a free program that helps you make 8-bit sound-effects and offers good templates and easy tweaks. For the music I would mostly find royalty free music online and cut it up/looped it.

Overall it was an awesome learning experience, and I'm more then happy to answer anyone's questions about the game or about programming for android and especially if you played the game and have any feedback what so ever I would love to hear it.

Hey guys, so I'm making a game for android tablets so show off at this convention in Toronto in like 10 days. Originally it was supposed to be kind of a plants versus zombies but you could move and attack with the guys instead of it being stationary. Anyways long story short were starting to not like this idea and were trying to think of what else we can do with the 2D engine we built I was thinking something like the old ninja turtles arcade games but its guys with guns, I just need some kind of inspiration to get an idea together. Anyone have any good games like this I can look up, any generation is good I just want to see nice implementations of this style.

I found the link in the first line of googles robot.txt file, its basically the terms of service for using automated scripts or programs to collect data on Facebook. I think it sucks that anyone can request permission to just mass collect personal data like that, really makes you wonder what else you agreed to in the Terms of Service. Do other social networking sites allow this or is just facebooks shady ass?

PS Whatever I make I'll post the .apk install file for anyone who has an android phone, depending on which API we use (2.1,2.2,ect..)

I'm a student of video game programming at Humber College in Ontario Canada. For backgrounds sake I've programmed games on C++,C# with XNA (eventually tested on Xbox 360) and Java. I also have experience with Unix scripting, Java Script and light web design.

This Friday is the start of this:http://greatcanadianappathon.com/. Basically a bunch of schools from across Canada can sign up to participate, and they stick you and your team of up to 3 other students in a room for 48hours and the 3 teams that make the best apps (respectively) then have to make another game. The winner of the final showdown wins the grand prize of $25,000, pretty sweet eh?

Now, I'm pretty amateur when it comes to programming on a mobile device, plus I've only really been programming for about 4 years now so I'm no expert, but at the same time I'm not a (for lack of a better word) noob. I've been making a game engine on the android platform for about 3 months now. Its a simple RTS based engine we're going to use for a game we're currently working on (if there's intrest I can post about that as well), which is coming along really well. My team is my coding friend Tony, my girl friend (the artist) Jazeen and myself Peter. As the coders Tony and I are the main people on the team in terms of design input but Jazeen is an awesome artist and her sprites are going to make whatever we need look really good and profressional. We have to make the game in line with a theme they don't tell us until the night before, and we're not aloud to bring in any code, which sucks. So were we're at now is we've chosen Android because of our expirance with its framework, and the because it uses a language a 3 year old could learn, Java. We're more then likely going to try and recreate our engine very quickly and build off that. Eventhough it was designed for an RTS style game, most of its guts are universal thus making it a great start point.

Anyways I figured it would be fun to share a live blog of sorts here for anyone interested in how games (very small ones) are made. Ask any questions or give comments OR if you're a programmer and can tell me what I'm doing wrong (which I'm sure will be lots of time) I would appreciate it a lot!