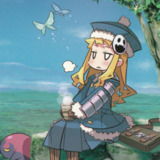 I'm about to throw in the towel for Conquest Chapter 10 on Lunatic, I simply don't have the time.

I love these maps but a blind first playthrough with this route/difficulty in particular is pretty unforgiving. There's also some lategame stuff I'm aware of that can be easily made unwinnable if you didn't plan your pairings/promotions well or simply rolled poorly. That's a pro or con depending on your current stance, I'd imagine things are way more manageable with more experience with this game's changes (and more discussion of map strategy to come).

All that said, I think the overall design of Conquest is wonderful, and Hard sounds like it strikes a great balance.

Also I've heard people say archer Mozu on Conquest is valuable, but it's nearly untenable on Lunatic if you didn't feed her exp immediately in the paralogue (had no intention to use her before I learned about her reclass). Babying units in general is hard, I'm usually forced to make moves just to keep my units alive.

No interest in side objectives, weapon research, and exploring mechanics in general. Which is fine, but undermines a lot of what makes MGS5 in particular great.

The format of 5 was basically the worst match imaginable with their recording schedule. Whereas the previous games could at least be carried by goofy codecs/cutscenes and of course nostalgia paired with Dan's raving fanaticism (which was also swiftly curbed in 5). I think even a little bit of off-camera work or a few key tapes could have improved the playthrough greatly, but hey, I guess that's how Drew would've played the game even on his own.

What perplexes me is Drew claims he's invested in the story, yet didn't feel any impetus to listen to the tapes. I'd figure the lack of cutscenes would've been enough to overcome his preference to mainline. What was he there for then? Certainly not the stealth gameplay. Chalk it up to the pressure of recording? The playthrough felt like a joyless obligation at times, and it disheartens me that this may be the last impression of MGS Drew is left with.

Edit: To be fair, they covered the story beats of Peace Walker and Ground Zeroes in broad strokes so I suppose it makes sense Drew isn't really interested in Big Boss's arc and manages to refer to him as Solid Snake several times. Personally, I was never convinced he was in it for the story, it's just good video.

Reeeeeally looking forward to how this sounds localized.

Ah to hell to raiding, hardcore or otherwise, it all feels like a second job when you're not playing with close friends. It's like playing jump rope with 8+ other people, and the difficulty is always either too low or too high while everyone is scared to death of wasting others' time or their own.

I get the desire to see all the content the game has to offer, but as I get older the stress versus payoff just seems more and more ridiculous. I used to frown on people who play MMO's more casually but now I completely understand.

At some point you just have to accept that pocket communities are developing everywhere and creating their own culture, from subforums to Youtube channels, and these groups may interpret this site's content differently or use it for their own means regardless of integrity or legitimacy. Similarly, I remember Jeff attributing the growing backlash by fans against negative reviews and anything resembling unfair criticism to the fact that there are devoted and enduring online communities for most games nowadays.

For what it's worth, I think this site at least tends to attract people who are more savvy than the rest, a quality that probably comes off as cynicism or "un-fun" to some common internet creep riding the latest wave of hype or manufactured controversy.

Holy shit why did I read the Steam forums!!

Hello thread citizens! I've neglected my anime backlog for video games for a few years, but I still had anchors in Gundam Unicorn and UBW. Finally getting around to watching them in their entirety recently has revitalized my interest. I'm really happy overall with UBW's adaptation although I won't burden you with my Type Moon/ufotable gushing. However, from Gundam Unicorn I have a few questions about branching out.

I enjoyed Unicorn despite its cliches, the battle animation definitely being the highlight, it left me wanting for space opera but I'm not quite ready to give something like LoGH a second chance. Space Battleship Yamato 2199 has been billed to me as "old school with modern animation"... it's as good as it sounds right?

The other aspect of Unicorn that delighted me was the OST. I want to experience all of Sawano's glory. I've hit big ones in past like Kill la Kill and Attack on Titan and even some live action like Team Medical Dragon (boy that show). Which brings me to Aldnoah Zero and Seraph of the End, both of which sound almost crippling from the way people talk about them. Is it worth it? Maybe I'll just wait for my interests to overlap with Xenoblade Chronicles X.

Unsolicited GB cameos are always the best or the worst. I'm sure the intent was harmless but given this franchise's history it just comes off as desperate.

If nothing else, I'm really looking forward to dicking around to the tune of those music tapes.