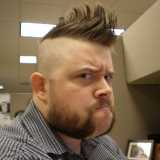 I think this is it?

This was an unexpected discovery after looking up Mini Metro on GB to put it on my finished games list. Thanks for the great read!

While I enjoyed the sketches in years past, last year's holiday content was one of my favorites. My wife watched almost every one of them with me and it really did seem like a Best Of 2017 recap.

I think it was a great reason to come back to this game. I hadn't gone all the way to platinum it when I originally played, so there was a lot to do in this world even without the DLC. Just finished the DLC campaign and found myself looking around for more fun things to do, but I think it was just long enough.

Edit: I also had to bump the difficulty down one notch, maybe I was just rusty from the months I was away but I was getting wrecked bad in the first couple of hours. It made the experience more fun (and was still kinda hard!).

@danlongman: That is one of the nicest things I've seen as fan art on this site and I love it.

And to be honest, Max comes off as a bit of a jerk, especially if you read the text messages on Chloe's phone.

You're not kidding, I just read them last night and Max comes off as one of those friends everyone has. Or a family member, for some. So far I'm totally bought in on the need to tell Chloe's side of this story.

Really glad you wrote about this, I had a similar reaction in the opening hours of the game but couldn't voice it as well as you just did.

However, I remember being less forgiving than you with Human Revolution, in a min/max sense it totally pays off to steal everything that isn't nailed down -- in a roleplaying sense for both games why is this super soldier/stealth ninja stealing weapons and valuable medicine from the poor and sick in Detroit/Hong Kong/Prague/wherever. When a character is pillaging vaults in a bank (owned by potentially evil corporations with billions of dollars) I can see the justification.

It sounds like I'm asking for a paragon/renegade system from Deus Ex, and maybe that's a preconceived notion I brought into a game that's more about privilege and preserving humanity. But if the Adam Jensen that you've built through your conversation choices is sympathetic to the people of Golem City, why doesn't he acknowledge when you're acting against those values in private?

I always listen to Bombcasts at anywhere from 1.5x to 2x and if the original was sped up I don't think 2x would be comprehendible.

I've had this problem since Tuesday or Wednesday this week, too.

I actually thought I was using the dark theme until I clicked it. Wow, that theme's much darker...

I love that one that sounds like it has horns on it, that was the regular one at least during the last half of 2010. And Jeff would use it whenever he hosted the show before Ryan passed. That one has always been my favorite.